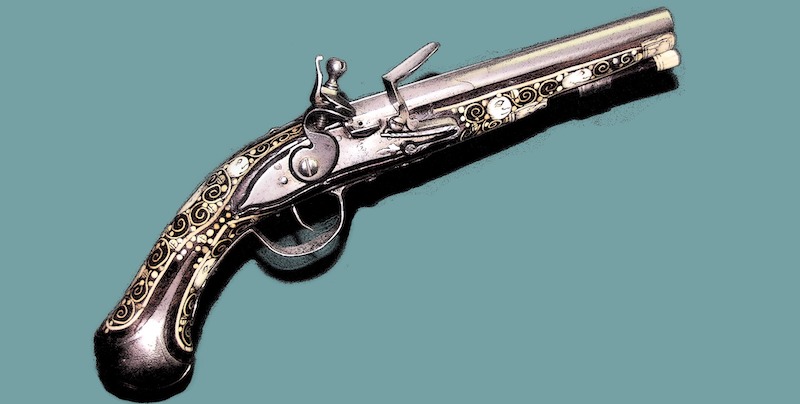 Who has the right to defend themselves by having access to weapons? Conversely, who is excluded from this privilege?

Historically, the act of carrying weapons has been strictly codified and controlled. Such regulations classify weapons based on complex scales of their dangerousness and the technical skill they require. They are also intended to create hierarchies based on status, to distinguish between conditions, and to solidify social positions by creating a system of differentiated access to the resources necessary to defend oneself. This access is determined by rights of possession and rights of use; however, juridical opinion has always had a hard time establishing clear distinctions. Martial practices take innumerable forms.

Objects that can be used as weapons may not be recognized as such (this is the case for items of all kinds, not only pitchforks, sickles, staffs, scythes, and pickaxes, but also knitting needles, hair pins, rolling pins, scissors, lamp stands, knickknacks, belts and laces, forks, keys, spray paint, gas canisters, or even the body itself—the hands, feet, and elbows). Herein lies the difficulty in the idea of use, which can never be fully anticipated, circumscribed, or prevented. Everything can be used in thousands of ways: any object can become an improvised weapon.

With this qualification in mind, in Europe, with the exception of the armed forces and the police, the right to bear arms has traditionally been a privilege reserved for the nobility, bound up in their exclusive hunting rights. In France, poachers were severely punished in accordance with a 1601 edict (lashing or, in the case of repeat off enders, the galleys or the death penalty), not only because they were stealing game, but primarily because they had given themselves the right to carry a weapon.

This right would expand and become more complex as urbanization and industrialization progressed, notably in order to protect the urban bourgeoisie and their interests. The monarchic state regulated the carrying of weapons more and more strictly throughout the 1660s, although individual or collective ownership of weapons remained common up to the French Revolution.

In the Middle Ages everyone was armed. Certain populations were even encouraged to remain armed (such as those located in strategic areas), and military units were made of conscripted civilians who brought their own weapons. In this context, the emergence of clearly distinguished social groupings made up of armed individuals was due to progressive layers of regulation rather than any kind of systematic code. There is thus no real contradiction between banning weapons and maintaining armed populations.

The distinction between the possession and carrying of weapons is part of the judicial arsenal designed to control armed bodies. It is also based on a division between public and private spheres, the first legal expression of which, spelled out alongside permission for honest merchants to defend their cities, concerned the right to be armed in “public space,” which referred to the king’s roads and all spaces dedicated to the circulation of goods.

The spread and the technical sophistication of firearms, alongside the gradual commercialization of civilian weaponry of all kinds, changed the very definition of “self-defense.”

The development of cities and large urban neighborhoods transformed the hexis chevaleresque. By the early fourteenth century, it led to a ban not on the possession of weapons outright but rather on the carrying of weapons outside the home. Since disarming groups of people on the king’s roads and public roadways was a necessary condition to allow the king to travel in peace and safety, public space is thus defined in reference to the safety of the king. This ban occurred alongside a positive measure instituting a system of “weapons carry permits,” the first recorded instance of which is from 1265.

These permits specify the purely defensive purpose of the weapon and its type (sword, knife, or crossbow, for example) as well as the geographic area of authorization. Until the fifteenth century, regulations relating to the carrying of weapons were collectively intended to control seditious currents among the nobility. “In France, the turning point was marked by the failure of the Fronde, the last manifestation of local armed forces standing outside the king’s power. Henceforth the possession of weapons of war was reserved exclusively to the state.” This “monopolistic” tendency is linked to the state’s control over  the production, trade, and storage of weapons.

In the fifteenth century, the legal framework around carrying weapons was upended by the formation of a professional army to protect the kingdom, which was to be the only force authorized to use weapons of war. Henceforth, there needed to be some kind of visible distinction  between military personnel and civilians. Notably, this distinction was made on the basis of the kinds of weapons carried (combat weapons or purely defensive ones), which in turn had an impact on what kinds of personal weapons were accepted.

Romain Wenz shows that in this context, the categories of offensive and defensive weapons were not drawn along the same lines as they would be today: shields and armor were considered offensive weapons because “they demonstrate an intention to fight, whereas blades worn at the waist were considered defensive.” Men ready for combat gradually came to be seen as criminal, their weapons marking them as “disloyal.” Confrontations were being increasingly policed, on their way to becoming a civilized, bourgeois form of intersubjectivity, and armed men upset the balance of this process. “Beyond coercion, the invention of ‘prohibited weapons’ teaches subjects to avoid violence by turning to the justice system.”

A distinction was also made between bearing arms and taking up arms: the former was restricted, with only a minority of individuals legitimately accorded this right, while the latter was forbidden in order to criminalize armed rebellion. Regulations around the carrying of weapons mutated, allowing for the externalization of protective force (the justice system), while still legitimating the right to self-defense for some by making it legal for them to carry weapons at all times.

Starting in the sixteenth century, this legislation was applied to the aristocracy, but the law could not eliminate certain chivalrous practices among the waning nobility of the sword, who  refused to resolve affairs of honor in court, and laws criminalizing duels with increasing severity were of limited effect. This legislation also represents a shift. Henceforth, the justice system’s instrument for disciplining the use of weapons and martial practices came to focus on the defense of persons and property. The serious punishments handed down to aristocratic men who participated in duels show the lengths being taken to make them turn to the justice system to resolve conflicts among peers.

At the same time, however, they were ensured by law the right to carry and use “defensive” weapons to protect themselves from men belonging to other social classes. The nobility’s privilege of personally defending themselves and their belongings still implies an aristocratic culture of combat. When it comes to defense, the law isn’t everything—you still need to know how to do it properly. In order that the nobility be allowed to maintain their martial superiority, the legislation guaranteed their right to self-defense by codifying as licit or illicit not only various kinds of weapons but also access to martial knowledge and the culture of “military” training.

Arquebuses and pistols were thus reserved exclusively for gentlemen. Nobles also frequently carried a rapier, which is easy to carry and handle and is used for thrusting more than slashing, distinguishing it from the swords generally used in military campaigns. A civilian sword, the rapier is meant for self-defense. Specifically,  it can be wielded in the city, which is at once a perpetual site of crime and the primary stage for, if not a civilizing process, then at least “the pacification of manners” in what was coming to be known as “public space” in the modern sense of the term. In such a space, the conditions necessary for commercial exchange, such as the safety of honest people, had to be ensured. In practice, the separation between private space and public (civil) space was increasingly marked by whether one sets out armed or sets down one’s weapons upon entry.

Throughout modernity, the spread and the technical sophistication of firearms, alongside the gradual commercialization of civilian weaponry of all kinds, changed the very definition of “self-defense.” The legal framework concerning carried weapons and self-defense practices influenced the bearing of arms but not the acquisition of attitudes, abilities, and martial skills, which were enmeshed in social antagonism.

These antagonisms are visible throughout the Renaissance and the early modern period. In regard to fencing, the Italian school, dominant in Europe during the fifteenth and early sixteenth centuries, promoted an “art of fencing,” quicker, more technical, and requiring less physical force than the handling of a war sword. This style of “street” fencing, intended for self-defense, was made up of feints and ruses, dodges and surprise attacks (the famous botta, which means “strike” in Italian, a secret  thrust), and it made the sword an even more offensive weapon than before. It involved teaching how to wield a sword while dressed in city clothes and training in combinations that made use of the cape or coat.

The development of “training,” a genuine didactic self-defense practice, also led to the parallel development of symbolic or euphemistic combat, as exemplified by the appearance of weapons deliberately rendered harmless and intended for drills. In the nineteenth century, in a treatise on the history of fencing, the author mocked this fledgling art as having “no system.” The remark is interesting because it shows how a set of pragmatic practices gradually reached an excessive level of formalization, losing in the process any effectiveness it had as a realistic art of self-defense. Combat had become codified, making it a marker of distinction, and fencing became a “science” and then a “sport” reserved for the elite. This was in opposition to the rabble’s messy techniques, at a time when the values of noblemen were no longer shaping the dominant norms of “modern” masculinity.

The tradeoff signaled a loss of effective martial skill and a crisis of virility among the declining aristocracy. Norbert Elias defines this process as one of “sportization,” based on the experience of English sports during the Victorian era. For Elias, such codification is the mark of a ritualized activity that has adapted the affective experience of confrontation (pleasure, fear, anger) into a form that dramatically reduces its cost in injuries and long-term physical consequences.

In combat arenas where their bodies were safe, men from the most privileged classes kept their distance from the anarchy of street fighting. They fought among equals in specific time frames with agreed-upon moves, and so became sport fighters. As a self-defense strategy, this was not based on training your body for physical self-defense but on avoiding situations of “real” combat at all cost, as these risk being sites where class struggle is literally given flesh. 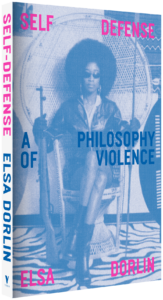 Excerpted from Self-Defense: A Philosophy of Violence by Elsa Dorlin, available via Verso Books.

Elsa Dorlin is Professor of Philosophy at the University of Toulouse Jean Jaurès, and the author of The Matrix of Race and Sex, Genre, and Sexualities. 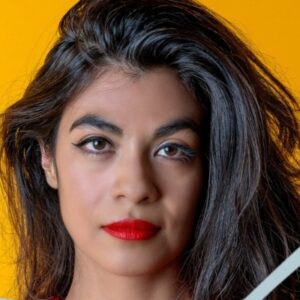