Running the nation’s central bank involves more than setting monetary policy to guide the economy, and Janet Yellen moved quickly to make her mark in other ways. One was to show that the Fed represented the interests of all Americans, not just the financial community. That is why she made a point of giving her first out-of-town speech as chair at the Fed’s annual community reinvestment conference in Chicago in March 2014, to discuss ways to help disadvantaged neighborhoods still struggling with high unemployment and homelessness in the wake of the housing crisis.

At the time, she had sparked considerable controversy by singling out the plight of two jobless people who subsequently were revealed to be ex-felons. But that experience only strengthened Yellen’s resolve to use the Fed’s powers to help those in need, including those who spent time in prison and encountered the most trouble finding steady work.

In November 2006, while president of the San Francisco Fed, Yellen tackled the subject in a speech entitled “Economic Inequality in the United States” to the Center for the Study of Democracy at the University of California, Irvine. She readily admitted that income inequality is not part of the Fed’s “dual mandate” to foster stable prices and promote maximum employment. “Nonetheless, this has been an interest of mine for a long time,” she said. Yellen then identified the main culprit for growing income gaps in the United States over the past several decades: globalization.

But that experience only strengthened Yellen’s resolve to use the Fed’s powers to help those in need, including those who spent time in prison and encountered the most trouble finding steady work.

She explained that US exports tended to be high-end goods that required skilled labor to produce, such as aircraft or complex machinery. By contrast, imports tended to be more basic goods, such as steel, clothing, or toys, which easily could be produced by lowskilled workers overseas. Likewise, cars and trucks were designed in the United States but increasingly assembled in Mexico or overseas. The result was increased demand for US workers with higher education and training and a corresponding decline in demand for workers with only a high school diploma or less.

The trend became pronounced during the 1980s, as globalization flourished. Steel and auto workers who made good pay despite limited education and training lost their jobs as their companies moved operations to lower-cost locations or increased the use of automation. The glut of low-skilled labor was worsened by an influx of immigrants willing to take low-paying jobs. A 2019 study by the Federal Reserve Bank of St. Louis found that employment in the US auto industry fell 17 percent between 1994, when the North American Free Trade Agreement took effect, and 2018.

In a prophetic conclusion that might have been written after the Trump-provoked January 6, 2021, insurrection against Congress when it had convened to certify Joe Biden’s election as president, she said, “There are signs that rising inequality is intensifying resistance to globalization, impairing social cohesion, and could, ultimately, undermine American democracy.” She said the most effective ways to reduce inequality are to improve education, particularly for early childhood, and to construct a stronger social safety net. “Inequality has risen to the point that it seems to me worthwhile for the US to seriously consider taking the risk of making our economy more rewarding for more of the people.”

As Yellen noted, inequality is not a task the Fed was set up to tackle, and the solutions she identified are outside the reach of monetary policy. Yet, the Fed is not powerless to address the problem, either. For one thing, it has cast a bright spotlight on inequality through the release of its Survey of Consumer Finances that it conducts every three years. The survey compiles data on the income and wealth of families from the wealthiest to the poorest, and reports the disparities, which have grown substantially. Over time, the survey has dug deeper into what’s happening with Black households, Hispanics, and women, to provide a more detailed picture of inequality.

From 1989 to 2013, Yellen explained, the average income of the top 5 percent of households adjusted for inflation grew by 38 percent, compared with less than 10 percent for the other 95 percent.

The 2019 survey found that median net wealth for a white family—the value of assets such as savings, investment, and property—was $189,100, compared with $24,100 for a Black family and $36,050 for a Hispanic family, a wide disparity that had barely budged since the prior survey in 2016. The Fed has the ability to help lower-income people at the margins by making it easier for them to obtain bank loans and other financial resources through the community development programs at the reserve banks and the Fed’s Division of Consumer and Community Affairs in Washington.

Early in her tenure as chair, at a September 18, 2014, conference on how families of all income levels can build assets, Yellen noted the sobering findings of a 2013 Survey of Consumer Finances: the bottom half of families held a mere 8 percent of all household financial assets, and most lacked the savings to cover an unexpected expense of just $400.

A month later, in an October 17 speech to a conference on Economic Opportunity and Inequality hosted by the Boston Fed, Yellen went into great detail about how bad the problem had become. “The past several decades have seen the most sustained rise in inequality since the nineteenth century after more than forty years of narrowing inequality following the Great Depression,” she said. “By some estimates, income and wealth inequality are near their highest levels in the past hundred years… I think it is appropriate to ask whether this trend is compatible with values rooted in our nation’s history, among them the high value Americans have traditionally placed on equality of opportunity.”

From 1989 to 2013, Yellen explained, the average income of the top 5 percent of households adjusted for inflation grew by 38 percent, compared with less than 10 percent for the other 95 percent. As for wealth, the top 5 percent owned 63 percent of all assets, while the bottom 50 percent owned a mere 1 percent. A main reason for the disparity was stagnating wages for average workers and a steady increase in the value of stocks, predominantly held by the wealthy. Compared with the world’s other developed nations, the United States was near the top in both the size of the inequality gap and the speed by which it has grown. Indeed, the gap accelerated noticeably during the COVID-19 pandemic in 2020, as low-wage workers suffered the most job losses and the wealthy benefited from stock prices jumping to new highs.

In her 2014 speech, Yellen offered four partial solutions to narrow the inequality divide: better health care, education, and social services for children; more affordable higher education; more opportunities to start a business; and increased incentives to save and leave inheritances. Much of that agenda became part of President Joe Biden’s $3.5 trillion Build Back Better program unveiled in 2021—and shelved later that year—to improve the nation’s social safety net.

As she evaluated her own role in combatting inequality as Fed chair, Yellen said she convinced her colleagues to wait a long time until unemployment was low before raising interest rates, and then they did so very gradually. She knew that minorities and low-wage workers were the last to benefit from an expanding economy as new jobs were created and the pool of available labor shrank. That is why she wanted to keep interest rates low and the economy growing for as long as possible without reigniting inflation. In fact, the expansion that began in 2009 and ended with the COVID-19 pandemic was the longest in US history and resulted in record low unemployment and poverty rates for Blacks and Hispanics.

It seemed ludicrous to Yellen for Stiglitz to suggest that raising interest rates would reduce inequality by screwing the wealthy more than the poor.

A surprisingly contrary view was made by Yellen’s Yale mentor and predecessor as chief White House economist, Joseph Stiglitz. In an interview for a July 13, 2021, PBS Frontline documentary called “Power of the Fed,” Stiglitz assailed the Fed’s bond-buying program under Bernanke and Yellen as “a kind of trickle-down economics” because in pushing down interest rates it sent stock prices soaring. “And so, who owns the stocks? It’s the people in the top, not just the top 10 percent, but the 1 percent, the one-tenth of 1 percent,” he said. “And so, it increases enormously wealth inequality. We have had increasing inequality really since the late 1970s. And this was putting that on steroids.”

The accusation from a longtime friend that the Fed under her watch was contributing to income inequality drew a rare flash of anger from Yellen, who thought it was misguided and a cheap shot. “The Fed has one and only one tool and that’s interest rates,” she retorted. “And the most important thing is putting people back to work and making sure they have jobs. And the only way to accomplish that is by lowering interest rates.” Indeed, it seemed ludicrous to Yellen for Stiglitz to suggest that raising interest rates would reduce inequality by screwing the wealthy more than the poor. Lowering rates resulted in an improved labor market “and that’s what the Fed did,” she said. “I wouldn’t apologize for that.”

Yellen acknowledged that lower interest rates also tend to increase the value of assets, such as stocks and real estate, which benefit the wealthy. But lower rates also reduce the rate of return on bonds and other savings wealthy people have. So the Fed’s interest rate moves can be something of a mixed bag. Yellen thought it made no sense to raise interest rates to reduce the asset values of the rich because poor people would get screwed as well, and they couldn’t afford another setback. The wiser course, she believed, was to focus policy on making life better for the disadvantaged even if that meant the wealthy benefited, too. 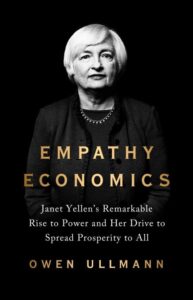 Excerpted and adapted from Empathy Economics: Janet Yellen’s Remarkable Rise to Power and Her Drive to Spread Prosperity to All by Owen Ullmann. Copyright © 2022. Available from PublicAffairs, an imprint of Perseus Books, LLC, a subsidiary of Hachette Book Group.

Owen Ullmann’s five-decade career in journalism began as a reporter for The Elizabeth N.J. Daily Journal. More recently he has held senior management and editorial positions at USA Today. Prior to USA Today he spent six years at Business Week magazine, where he managed the Washington Bureau as senior news editor. From 1983 to 1993, he worked in the Washington Bureau of Knight-Ridder Newspapers, covering economics, the White House and the State Department. He won two awards from the White House Correspondents’ Association for his coverage of the Reagan Presidency. Owen worked for the Associated Press from 1973 to 1983, as automotive writer in Detroit, and later as labor writer and chief economics correspondent in Washington. He currently serves as executive editor and Washington columnist for The International Economy, a quarterly magazine written for central bankers, finance ministers, financiers, and academics. He previously wrote a critically acclaimed biography of David Stockman, President Ronald Reagan’s brilliant and brash budget director. 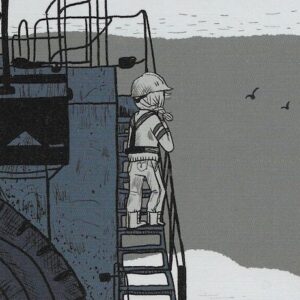