Nina Totenberg reflects on her long friendship with Ruth Bader Ginsburg • Jodi Picoult and Jennifer Finney Boylan reflect on co-writing a novel • Thea Lenarduzzi on fascism and illness in Italy’s national consciousness • How Amazon accelerated the commodification of literature • On phone sex, first writing jobs, and unexpected teachers • Why the left needs organized labor • An annotated bibliography of octopus videos • Falling in love with goalkeeping • How virologists in China worked to tell the world about COVID-19 • Ryan Lee Wong on living in a monastery during the pandemic • An illustrated (incomplete) list of New York City’s best bookstore storefronts • Why book festivals matter, even in a time of war • Elias Canetti on writing in a troubling world • Was 16th-century poet John Donne really a playboy? • Erin Keane muses on Woody Allen’s Manhattan and powerful men • Marking 100 years of Emily Post’s Etiquette • Javier Zamora tells the story of his childhood migration • Prince Shakur on coming of age as a queer Jamaican boy in America • The power and possibility of retelling classic stories • How Palestinians manage to cross occupation lines • Learning the many ways to cook a chicken as a young Parisian chef • Two cocktails for your next literary happy hour • A brief history of social media platforms, from LiveJournal to the January 6th insurrectionists

Turkish garbage collectors have created a library from discarded books.

Info vs. Intuition: How to Make Smart Business Decisions in the Age of Big Data 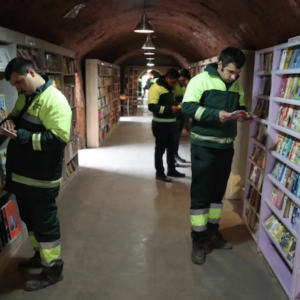 Turkish garbage collectors have created a library from discarded books.

Yes, there is a library in Ankara composed entirely of books thrown out (presumably) by people who hate reading (or who work...
© LitHub
Back to top