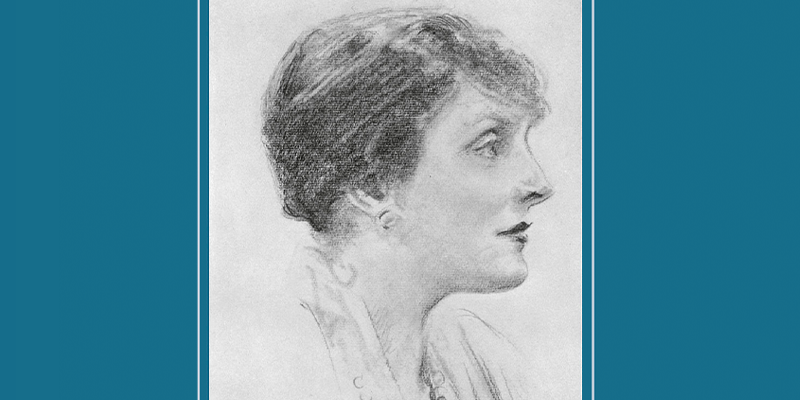 “She was the source for American etiquette and manners advice.”

Emily Post became America’s primary source for etiquette advice in the twentieth century through both her bestselling book Etiquette and radio shows on the topic. She was a prominent woman in New York society from the early 1900s until her death in 1960. Born in Baltimore, the daughter of famed architect Bruce Price, she would marry, have two children, get divorced, become a novel­ist, and chronicle a cross-country road trip before she ever became famous for writing Etiquette.

Though much of Emily’s early work was fiction, she seized the opportunity to write about manners and etiquette presented by her publisher. The more she dove into the topic, the more she found she had to say. Upon its publication in 1922, when she was 50, Emily’s book Etiquette in Business, in Society, in Politics, and at Home topped the nonfiction bestseller list, and the phrase “according to Emily Post” soon entered the American lexicon as the last word on the subject of social conduct. Etiquette’s first edition was not only a practical guide, but also a look into the world of high-society American culture. With the book’s success in the 1920s and Emily’s national radio program, The Right Thing to Do, in the 1930s, Emily Post was cemented as an American icon. She was the source for American etiquette and manners advice.

Emily included wartime supplements to the book in the 1940s, and continued to write and update the advice she gave until her death. In 1946 she established the Emily Post Institute, Inc. with her son Edwin, allowing for her family to carry on her legacy and work. Emily lived to see the horse and buggy become the car, the first coast-to-coast highway built, the rise of iconic brands such as Coca-Cola, and the invention of the airplane, telephone, and the television. Through it all, she kept her finger on the pulse of American life. Her work was adapted and changed with each decade, and although she passed away in 1960, a Sterling Brands survey revealed that most people think Emily Post is alive and well and about ten years older than they are. Legends never die.

A hundred years and five generations after Emily wrote the first edition of Etiquette, her great-great-grandchildren Daniel Post Senning and Lizzie Post now run the Emily Post Institute from Vermont, managing the company’s publishing efforts, website, and social media, as well as training services and the Awesome Etiquette podcast. The legacy of Emily Post, still America’s go-to source for etiquette, continues, and now rests in your hands as well.

Far from static, Emily Post etiquette evolves as American society changes. For all of the traditions that inform our advice, there are also current trends. The way we speak, the general attitudes around formality and familiarity, the specific actions we deem courteous, and of course our meth­ods of communication are all subject to change. As we celebrate 100 years of Emily Post’s Etiquette, we can’t help but wonder what the next 100 years will bring. What will remain important? What will be new? What from today’s modern etiquette advice will become traditional and what will be antiquated by the time the next generation (if they are willing) is ready to take on the mantle? Etiquette is always evolving.

Consideration, respect, and honesty will forever be good principles to guide us when we don’t know what to do, but we use them along with feedback we hear from you to identify what’s working and what isn’t. Below are a number of topics that we can imagine seeing changes to in the future.

As we celebrate 100 years of Emily Post’s Etiquette, we can’t help but wonder what the next 100 years will bring. What will remain important?

We’d love to hear your thoughts on the etiquette surrounding them. We welcome your feedback on the following topics, any thoughts they might inspire, and the future of etiquette at ThinkingForward@emilypost.com.

Tipping in Restaurants: Restaurant service is the only service where workers’ take-home pay is dependent upon the gratuities they receive. There’s a social expectation around restaurant tipping that is not outwardly stated, it’s simply understood and trusted. Would changes in hourly wages that reduce the expectations around tipping in restaurants be welcome? Would a more European style of tipping in restaurants, where gratuities are truly just a “little bit extra” and discretionary, work for us in America?

The Obligatory Wedding Gift: Wedding gifts are traditionally given if you are invited to a wedding, whether you attend the wedding or not. Is obliging guests to give a wedding present if they decline the invitation too much to ask of guests? Could a suggestion to send a congratulatory card if you don’t attend a wedding be a more practical piece of advice?

Wedding Attendants and Gifts: Much is asked of those who agree to be part of a wed­ding party. Should wedding attendants (who often pay for multiple trips, parties, and their wedding attire) be required to also give a gift to the couple? Or could their participation be seen as the gift?

Married Titles: Currently only one title identifies an individual as being both an adult person and married, the title of Mrs. Do more people wish they could use a title that functions this way? Would men and nonbinary people appreciate titles that allow them to identify as married when they are not presented with their partners? What might this look like?

Responding to a Changing Climate: Droughts, storms, flooding, fires, shortages, and even disease are stretching our social systems in new ways. What are the areas of etiquette that could see change in response to a changing climate? Will it impact our host and guest roles when we visit those who live in climates very different from our own? Could disaster preparedness and response become a more regular consideration in our social expectations of each other?

Whatever changes we see in the future, it is all of us, our friends, our families, and our communities who will determine “the right thing to do.” We hope that by looking at etiquette as something that exists in service to a society and that is meant to change, we can all participate in building a kinder, more considerate, and more respectful world, together. 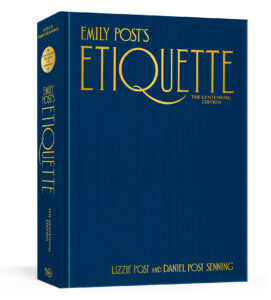 “The land of the Mayombe doesn’t want us.” The Brutality and Folly of the Construction of the Congo-Océan Railroad 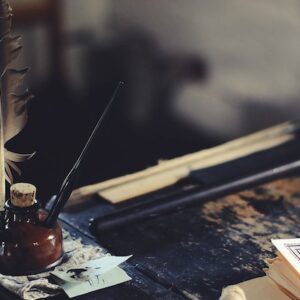 As a child, I played a recording of the 1961 musical film West Side Story over and over on my parents’ phonograph, barely...
© LitHub
Back to top
Loading Comments...