TODAY: In 1968, Spanish philologist Ramón Menéndez Pidal, who holds the record for most times nominated for a Nobel Prize, on 23 different occasions between 1931 and 1966, dies. (He never won.)

Remembering Joan Bingham • A conversation with Jonathan Lethem and a Q&A (in which he takes issue with some of our questions) • Tracy K. Smith on translating the world of Yi Lei • A poem by Margaret Atwood • Sir David Attenborough makes the case for “green” growth •

Sarah Haas on what a book can be • David Lazar tells a tale of two Oscars, Levant and Wilde • On black holes • Remembering the great Alex Trebek • Ruth Gilligan on the tricky task of mixing fact, fiction, myth, and everything in between • A people’s history of bathing • A conversation with poet Jericho Brown • Emily Temple finds a little pandemic peace in reading old books • When Allen Ginsberg and Gary Snyder roamed the Pacific Northwest • On walking as a dissident act • Maybe opera is for you? • On George Eliot’s feminism • The women who resisted the Nazis in Britain’s Channel Islands • Shocker: Eudora Welty read from a very early age • Caroline Weber on new money’s Gilded Age search for old world respectability • Revolution and memory in the diaries of Imre Kertész • Jim Gray looks back at the superstar rift between Shaq and Kobe • Deborah Madison tells her foodie origin story

As I Lay Dying, The Known World, The Phantom Tollbooth, and more rapid-fire book recs from Steph Cha • Dinty W. Moore recommends five books that have helped to define flash nonfiction, from Bernard Cooper’s Maps to Anywhere to Maggie Nelson’s Bluets • On what would have been Kurt Vonnegut’s ninety-eight birthday week, here are the very first reviews of Slaughterhouse-Five • New titles from Jonathan Lethem, Danielle Evans, and Jo Nesbø all feature among the Best Reviewed Books of the Week

Five psychological thrillers you should read this November, recommended by Lisa Levy • Lynne Truss on the most unusual murder weapons in crime fiction • Oliva Rutigliano on the tortuous literary puzzle Cain’s Jawbone, solved this year for the first time since the 1930s • Robert Littell on the national security implications of Trump’s long war against the American intelligence community • E.A. Aymar talks with fellow crime writers about writing across identity lines responsibly • James Swallow looks at five fictional hackers who use their l33t skillz for good • Anthony Amore on Rose Dugdale, the woman who stole Vermeer • Nev March wonders, was a beloved family friend a murderer? • Why The Hound of the Baskervilles still haunts, from James Lovegrove • How a breast cancer diagnosis took Elizabeth Breck from working as a private investigator to writing about one

An anonymous architect has imagined the Trump presidential library, complete with bedside urinals.

The Practice by Seth Godin, Read by the Author 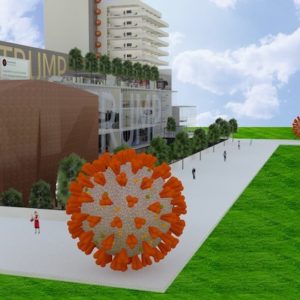 An anonymous architect has imagined the Trump presidential library, complete with bedside urinals.

In quarantine, some of us have more time on our hands than others—maybe none more so than the anonymous architect-cum-political...
© LitHub
Back to top