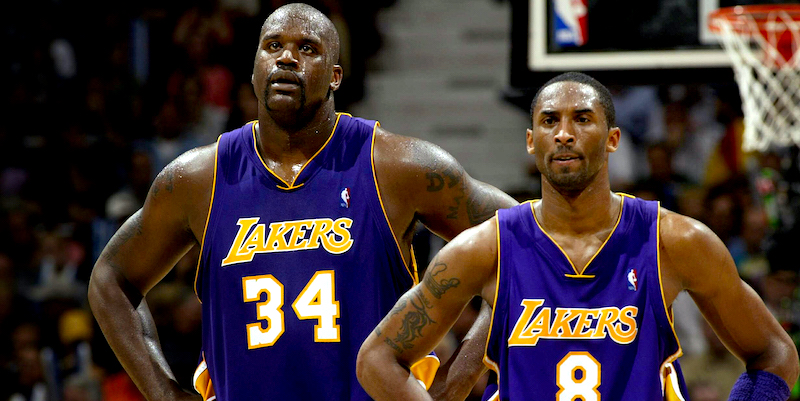 Jim Gray Looks Back at a Superstar Rivalry

I met Kobe Bryant when he was an infant, and I later saw him wandering the hallways of that San Diego Clippers organization I once scouted for. His dad, Joe “Jellybean” Bryant, was playing for them at the time, and Kobe would run around on the court after practice.

By the time the Lakers traded for him straight out of high school in 1996, Kobe was already a star. I was among the first to interview him in his Lakers uniform, when he arrived to help an iconic franchise return to glory. He faced some struggles early on. Coach Del Harris wasn’t playing him, and Kobe was initially frustrated. But soon enough, he began to play and start and morph into one of the best players in the league.

Throughout all that, I interviewed him. Over and over. Before games and after games and at halftime, and we developed a real rapport. Kobe would ask if I needed anything. He was respectful, insightful, and as driven as anybody I’ve ever been around.

In 2003, Kobe called me. I was taping an interview with Governor Gray Davis about the Cedar and Paradise fires raging in San Diego that had forced officials to consider canceling a Monday Night Football game there that I was scheduled to broadcast. Kobe was agitated and deeply upset about his most prominent teammate, all-world center Shaquille O’Neal, whom he had played with since 1996. Kobe wanted to be interviewed, so I called ESPN and made the necessary arrangements.

I started by asking for his reaction to Shaq calling the Lakers “his” team and saying that “everybody knows that.”

“It doesn’t matter whose team it is,” Kobe responded, firing the first salvo. “Nobody cares … It means no more blaming others for our team’s failure, or blaming staff members for not overdramatizing your injuries so that you avoid blame for your lack of conditioning. Also, ‘my team’ doesn’t mean only when we win; it means carrying the burden of defeat just as gracefully as you carry a championship trophy.”

I interviewed him. Over and over. Before games and after games and at halftime, and we developed a real rapport. Kobe was respectful, insightful, and as driven as anybody I’ve ever been around.

I reminded Kobe that Shaq had described him as less than a team player. Was he right? “That’s ridiculous,” Kobe responded. “I have been successfully sacrificing my game for years for Shaq. That’s what (Coach) Phil [Jackson] wanted me to do, so I did it. Last year Phil told me Shaq was not in physical condition to carry the trust of our offense, so he asked me to do it . . .”

In light of that, would he leave the Lakers when he could opt out before the next season? He said he would decide later, but had told Shaq he did plan to opt out. It was obvious how hard the feelings were there.

I knew immediately that the interview would reverberate, that it was volatile. Kobe actually wanted it to be more so. One quote that I didn’t put on the air was that, “the guy selling donuts at 7-Eleven has more pride and dedication to his job than Shaq does.” I said to Kobe that we were going to edit that out because I didn’t think that I would ever be able to deal with Shaq again if that sentiment aired. The interview was explosive enough. Kobe understood. Shaq didn’t. He also never knew how concerned I was about how Kobe’s words would impact him.

I also knew Shaq and many of their Laker teammates, so I called and told him the interview would be coming out. I gave him a heads-up, because I didn’t want him to be blindsided. He declined to respond. But he also got mad that day and remained upset with me for the better part of two years, when he referred to me as . . . Traitor Gray.

Shaq gave me his version of events in 2020. He described the vibe at Lakers practice the day after my Kobe interview as intense. The team had put in a metal detector at the entrance of the players’ facility, he said, because they thought that things could escalate, and they wanted to take precautions. Shaq said he told Kobe, “If you say anything like what you said to Jim Gray ever again, I will kill you.” Upon hearing that, Kobe jumped up and wanted to fight. “Let’s go now! I’m not afraid of you!” he yelled. But no blows were thrown.

Kobe and I continued to stay connected during his career and after he retired (with five championship rings) in 2016. The next year I heard from a group of businessmen in Hong Kong. They wanted to fly Kobe over for a question-and-answer-and-picture session, and they had been unsuccessful in reaching him through either his representatives or the Lakers.

I knew immediately that the interview would reverberate, that it was volatile. Kobe actually wanted it to be more so.

I connected them with Bryant’s rep, Molly Carter, who handled the negotiations, ironing out how he would fly (private) and the length of time he’d spend at the event. Kobe stepped in only when the organizers wanted to cut me out of the equation. No Jim, he said, no deal.

Kobe spent more than 24 hours on that plane en route to Hong Kong, after his landing had been blocked and the pilot had been forced to detour to Japan. He arrived just before the event, which took place at night, and answered questions for an hour on the top floor of the Ritz-Carlton. He also posed for pictures and signed autographs.

We were only in Hong Kong for about 36 hours, but Kobe showed us videos on his phone of his daughter Gianna playing basketball, noting how she played like him. “It’s so weird how genetics work,” he said with a chuckle.

One of the worst days of my life was January 26, 2020, the date that Kobe Bryant died in a helicopter crash. He was 41 years old and traveling with Gianna, who everyone called Gigi, and seven other passengers.

I found out about Kobe’s death from Stephen Espinoza, my boss at Showtime, while eating lunch in Manhattan.

“What happened?” I asked.

We were only in Hong Kong for about 36 hours, but Kobe showed us videos on his phone of his daughter Gianna playing basketball, noting how she played like him.

The worst possible thing. Within moments, I was doing a phone interview on Fox, and then I went into studio, where I talked about Kobe and his legacy for hours. This death hurt as bad as anything can hurt. I’d known Kobe his whole life. My heart broke for his family. I had done more than a hundred interviews with him, including his first game and his last one in a Lakers uniform. I had wondered how he hoped to be remembered. “As a talented overachiever,” he said. “Blessed with talent but worked as if he had none.” That sentiment remains etched into my memory. But so does his love for his girls (#girldad). I knew his daughter, how much she meant to him, how much life he had in front of him, and how many amazing things he planned to do both inside and outside of basketball, now through his daughter.

O’Neal and Kobe weren’t good friends, but they had agreed to a detente. I do think Shaq had found an appreciation for his rival/teammate as the years had passed. He was despondent over the crash. Perhaps there’s irony that in the days before his death, Kobe was at peace (with rivals), and any anxious moments with Shaq had long passed. Perhaps there’s a lesson in there, for all of us. 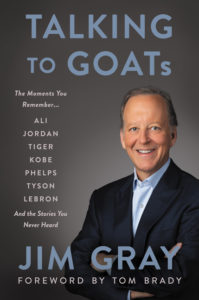 Adapted from Talking to Goats by Jim Gray. Copyright © 2020 by Scratchy Productions, Inc. Provided courtesy of William Morrow, a division of HarperCollins Publishers.

Jim Gray has won twelve National Sports Emmy Awards, been inducted into four Sports Hall of Fames, including the International Boxing Hall of Fame. He was named Sports Reporter of the Year three times by the American Sportscaster Association. Currently he works for Showtime, Fox and Westwood One Radio. At Westwood One, he is the studio host for NFL Monday Night Football and the Super Bowl, with broadcast partner Tom Brady, the most decorated quarterback in Super Bowl history. Jim lives with his wife, Frann, in Los Angeles, California. 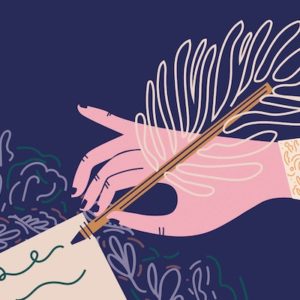 This first appeared in Lit Hub’s Craft of Writing newsletter—sign up here. In high school I was fed a full diet...
© LitHub
Back to top
Loading Comments...