TODAY: In 1955, Patricia Highsmith’s The Talented Mr. Ripley is published.

A literary adaptation for every Thanksgiving vibe • On reading John Cage in Reykjavik • Naguib Mahfouz’s daughter fights to preserve her father’s legacy • Five great small press audiobooks to gift anyone on your list • How two new books grapple with the ethics of parenthood • Alireza Taheri Araghi on stories of Iran told at a distance • On Pauline Kael’s controversial criticism of Citizen Kane • Kerri K. Greenidge on how William Monroe Trotter mobilized black Americans across class lines • On the storytelling legacies of Jay-Z and Rakim • The outsize impact of textiles on world history • Leila Taylor and M. Lamar discuss the long history of Afrogoth, from Toni Morrison to Kara Walker and beyond • Six novels that capture the gripping story of Detroit, past and present • Ian McKellen almost didn’t play Gandalf! • Thomas Lynch on “sin-eaters” and other bygone Catholic traditions • Allan Metcalf on the evolving legacy of Guy Fawkes • How to throw a shower for an important new arrival: your novel

V. M. Burns recommends six cozies about pets and poodles • 25 (more) crime novels short enough to finish in an afternoon • These food-themed cozy mysteries from Rosemarie Ross are perfect Thanksgiving reading • Margot Hunt looks at five villains who have had about enough of the domestic life • Ryan Steck rounds up six thrillers you have to read this month • Mauro Altamura signed up as an extra on ‘The Irishman’—he’d been struggling with the legacy of the Hoffa killing for 50 years • Michael Hughes on growing up during the Troubles • Lisa Preston rounds up six contemporary authors who channel their agrarian roots in crime fiction • Con Lehane and Randal Brandt talk detectives, the wonders of research libraries, and a real-life murder in the archives

C.P. Lesley and Charles Todd Talk Victorian Sleuths and the Toll of WWI 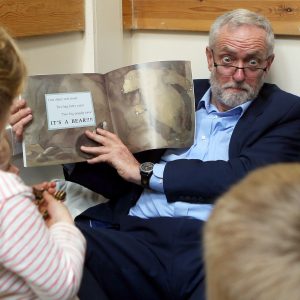 In a press conference in London earlier today, embattled-but-unbowed leader of the British Labour Party, lifelong democratic...
© LitHub
Back to top