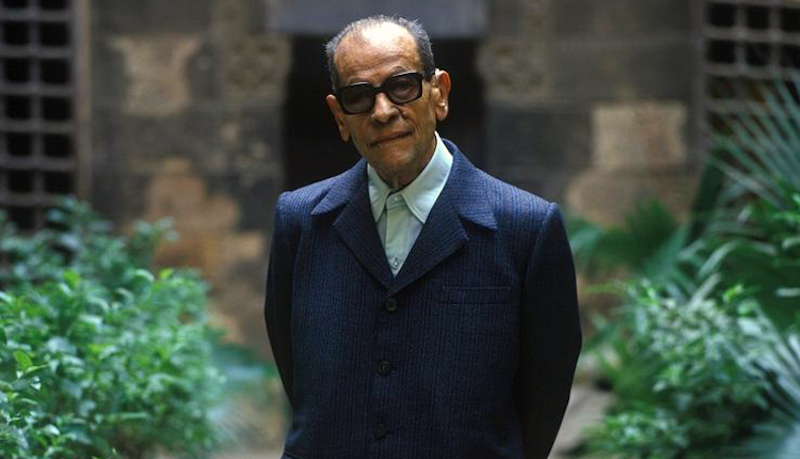 On a cool winter’s day in Cairo, I stepped into the Marriott Hotel and wandered over to the local bakery tucked away near the lavish hotel gardens. In the far corner of the small room sat Umm Kulthoum Mahfouz. We were meeting to discuss her recollections of her father, the late Naguib Mahfouz, Nobel laureate author, who still held the most recognizable name in Arabic literature. Instead, I found myself engrossed in a story of copyright and licensing infringement that shed light on the exploitative nature of one of Egypt’s most respected publishers.

During the course of a career that spans over 70 years, Naguib Mahfouz, the son of a lower-middle class civil servant, wrote 34 novels, 5 plays, and 15 short story collections, in genres ranging from historical fiction and realism to stream of consciousness, noir, and existentialism. Prior to being selected for the Nobel Prize in Literature in 1988, his readership was generally limited to the Middle East and North Africa, where he was widely read and respected. However, following the selection, Mahfouz’s books surged in popularity and were translated into dozens of languages, offering readers around the world informed criticism of British colonialism, Egyptian nationalism, and social change while capturing the essence of Egyptian culture, not many Westerners are familiar with, in the 20th century. Critics compared Mahfouz’s descriptions through Cairo to those of Charles Dickens’ London and the St. Petersburg of Fyodor Dostoyevsky

Umm Kulthoum, is currently suing the press—her third attempt in the last decade to take legal action for copyright infringement.

By the time Mahfouz was awarded the Nobel Prize in Literature in 1988—the first and only Arab author to date to receive this honor—he was 77 years old and limited in his ability to travel. He did not attend the award ceremony in Sweden, instead sending his two daughters, Fatima and Umm Kulthoum, to accept the award on his behalf. Fatima passed away in 2016, leaving her sister responsible for Mahfouz’s estate and legacy.

In 1985, three years before the Nobel win, the American University in Cairo Press (AUCP) signed a comprehensive publishing agreement with Mahfouz. Since then, it has licensed some 600 editions of his books in 40 languages. As of 2019, the AUCP has published 43 volumes of Mahfouz’s work, including the more recently translated

Love in the Rain (2011) and Heart of the Night (2011). The AUCP also inaugurated the Naguib Mahfouz Medal for Literature, which is awarded annually on Mahfouz’s birthday to recognize an outstanding work of Arabic literature.

Founded in 1960, the AUC press is one of the largest names in translated Arabic literature, the leading English-language academic publisher for the Middle East, and a giant in the field of Arabic language instruction texts.

“From when Mahfouz signed his first contract with the American University in Cairo Press to the end of the 20th century, the AUCP loomed very large on the translation landscape,” said M. Lynx Qualey, a leading authority on Arabic literature in translation and the founder of Arablit.com. “Literary agents had not yet shown any interest in Arabic-language authors. So an Egyptian author, even one of Mahfouz’s status, would have been entirely on their own.”

A significant source of the publishing house’s cachet came from its role as Mahfouz’s primary English-language publisher and worldwide agent for translation rights. But for Umm Kulthoum, Mahfouz’s daughter and heir, there has been another side to the AUC’s championing of her father’s literary legacy.

Umm Kulthoum is currently suing the press—her third attempt in the last decade to take legal action for copyright infringement.

In 2003, according to Umm Kulthoum, Mahfouz wrote a letter to the AUCP requesting that the press send all royalties to his daughters’ bank accounts, making them the sole beneficiaries. Shortly following Mahfouz’s passing, Umm Kulthoum and Fatima discovered that the AUCP had paid some of the royalties to one of their male cousins. “We were obliged to go to court and we won the case.” Umm Kulthoum explained.

A judge decided the case in the Mahfouz family’s favor in 2013. But there was also another problem: According to Umm Kulthum, the AUCP’s licensing agreement with Mahfouz “terminated automatically upon the death of the issuer in 2006. My sister and I conveyed this message clearly to the present AUCP director and his predecessor, who both conceded that the said agency agreement was no longer effective but refused to sign a new agency agreement subject to new terms and conditions with my sister and me.”

Umm Kulthoum also claims that the AUCP refused to give the daughters copies of the contracts the house made with foreign publishers, leading the Mahfouz family to the courts for a second time. The suit was filed in 2014, and was again decided in the Mahfouzs’s favour by a judge in 2015.

During the discovery portion of the proceedings, the AUCP was obligated to hand over the contracts in question, which revealed that the AUCP had granted Penguin Random House eBook rights to all of Mahfouz’s translated texts without the family’s approval. Random House has since contracted directly with the Mahfouz family for licensing rights in 2015.

If this weren’t enough, during our discussion at the Marriott hotel, Umm Kulthoum revealed to me that in 2007, the AUCP granted dramatic rights for Arabian Nights and Days (1979) to an American production company, also in contravention of the termination of their contract with the Mahfouz family in 2006.

Umm Kulthoum’s ongoing struggle to secure the rights to her father’s legacy exposes the coercive tactics of Egyptian publishers to leverage writers.

In 2018, Umm Kulthoum noticed that the AUCP had transferred funds into her personal account, and followed up with them to ask why. The AUCP claimed that they had sold the dramatic rights to Mahfouz’s The Beginning and the End to a Turkish production company. “There were several attempts to resolve the matter by contacting the AUCP director as well as the President, but they were all in vain,” Umm Kulthoum told me. She filed her third lawsuit against the publishing house in 2018, and is still awaiting final trial in the Egyptian courts.

To complicate matters, there was no legislation in Egypt prior to 1954 that protected literary property. This changed when Egypt introduced

Law No. 354 of 1954 on the Protection of Copyright, which provided a term of protection that extended to 50 years after an author’s death. It remained in force for nearly half a century before being repealed by a comprehensive intellectual property law in 2002. However, the 2002 intellectual property law did not alter the copyright protections from 1954 for authors. Given such outdated laws, Mahfouz’s ongoing lawsuit is only one instance of the pervasive trend of copyright infringement among Egyptian publishing circles.

Alaa Al-Aswany, the award-winning author of The Yacoubian Building, terminated his contract with the AUCP in 2013 for what he described to be “substandard acts” in their handling of his novel, The Automobile Club of Egypt. This included a poor English translation of his novel which they tried to publish without his approval. Renowned Egyptian author Bahaa Taher

revealed his own issues with the AUCP’s handling of his literary properties in 2010: Allegedly, there were translation errors in one of his novels, and publishing rights were granted without his permission. In rebuttal, Director Mark Linz defended AUCP’s translation decisions and claimed that Taher and his lawyer disseminated “false information through the media.”

Mahfouz’s literary output, though tremendous, was not financially lucrative during his lifetime.

In his statement, Linz revealed that “the publishing department of the American University is recognized as the leading publishing house to undertake the publication of English works in the Middle East. Its publications total over 500 titles, and it translates Arabic literature and culture to readers all over the world. It is therefore regrettable to find that 50 years of experience in the translation of Arabic literature has become a subject of doubt in a manner that does not imply any degree of responsibility. It is even more regrettable that these accusations were not directed directly to us but were initially directed to the media in a provocative manner, which causes damage.”

Although Umm Kulthoum’s lawsuits against the AUC have not garnered much attention from the Egyptian public, they are important cases that have set precedents for others to follow.

Tarek Badawy, a partner in Shahid Law Firm’s International Business and Dispute Resolution Groups and an Adjunct Professor of Law at the American University in Cairo, stated in defense of Umm Kulthoum’s case that, “assuming the license terminated with Naguib Mahfouz’s death, his legal heirs will have rights in the copyrighted works and can license it if they want. AUCP should have no right to the copyrighted works and any use of it would be a breach of the rights of the heirs.”

As arguably the most renowned author in the Arab world, the rights to Mahfouz’s works, and the consequent royalties due, provide a stable income for his family in the wake of his passing. Mahfouz’s literary output, though tremendous, was not financially lucrative during his lifetime. He worked for three decades as a civil servant, writing in his spare time but not making much money from his efforts due to poor advances and payments from existing publishers. The only exception was the cash award of the Nobel Prize for Literature in 1988, worth approximately $390,000. Mahfouz

reportedly gave one fourth of the prize to his wife, one fourth to each of his two daughters, and the final portion to charity. A move that can be understood as an attempt by a man in his late seventies to ensure that his family was financially secure once he passed.

Umm Kulthoum’s ongoing struggle to secure the rights to her father’s legacy exposes the coercive tactics of Egyptian publishers to leverage writers and their families. However, at least, it will ensure that the AUCP no longer enjoys a monopoly over Arabic literature in translation. This became all the more apparent when literary critic and author Mohamed Shoair discovered 18 unpublished short stories written by Mahfouz in Umm Kulthoum’s home. Instead of awarding the publishing rights to the AUCP, Umm Kulthoum turned instead to Lebanon’s Dar-al-Saqi and its UK English imprint SAQI Books.

“The situation is different now,” said M. Lynx Qualey. “AUCP/Hoopoe is a player, but authors have a range of options. Also, a number of award-winning Arabic-language writers have been signed by literary agencies.”

“I’m all alone in this,” Umm Kulthoum told me. Though tired and disheartened by the endless lawsuits she has had to file over the past decade, Naguib Mahfouz’s last remaining daughter has no intention of giving up now. To do so would mean parting ways with her father’s legacy.

Karim Zidan is an Egyptian-Canadian journalist, creative writer, and translator with bylines in The Guardian, Foreign Policy, and VOX Media among others.

Reseeding the Food System: An Interview with Rowen White

Meditations on a Sunday Morning While Driving on Sunset Boulevard 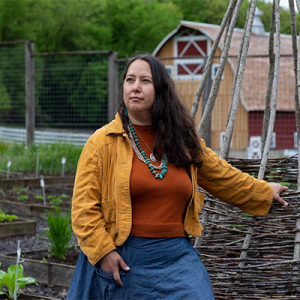 Reseeding the Food System: An Interview with Rowen White