On the Relentless Campaign to Force Americans to Accept the Automobile

Via Overland
By Jeff Sparrow

I’m gonna get myself a 1967 Cadillac Eldorado convertible
Hot pink, with whale skin hubcaps
And all leather cow interior
And big brown baby seal eyes for head lights
And I’m gonna drive in that baby at 115 miles per hour
Gettin’ one mile per gallon
Sucking down Quarter Pounder cheese burgers from McDonald’s
In the old-fashioned, non-biodegradable styrofoam containers
And when I’m done sucking down those greaseball burgers
I’m gonna wipe my mouth with the American flag
And then I’m gonna toss the styrofoam containers right out the side
And there ain’t a goddamn thing anybody can do about it …

Today, Leary’s rant takes on a special significance because we all know what Eldorados do to the planet.

A 2010 NASA study identified motor vehicles as the US’s greatest contributor to warming, since they emit greenhouse gases without the counter-acting sulphates and other cooling aerosols generated by the industrial sector. Not only do they consume great quantities of fossil fuels, they do so with particular inefficiency, wasting a considerable portion of the energy they burn.

Yet, if you search for the phrase “America’s love affair with,” Google autocompletes with “cars”—with “guns” a distant second.

On best estimates, there are some 270 million cars currently in the US, with 90 percent of households owning at least one. Most own several. The low fuel prices produced by the fracking boom encouraged the use of SUVs and trucks, which now account for more than 60 percent of vehicle sales.

Obviously, Americans aren’t the only people who drive cars. Throughout the developing world—particularly South and East Asia—car ownership continues to grow. Chinese customers, for example, bought some 28 million cars last year, a huge figure that actually represents a slight decline on recent trends.

Nevertheless, the US remains the spiritual home of car culture, the locus of a particular relationship with the automobile that was subsequently exported elsewhere.

For many progressives, that culture exemplifies the political dynamic of ecological destruction, a catastrophe they attribute to popular greed. They classify blue-collar SUV owners as assholes, actively hostile to environmentalism. The populist right agrees, but celebrates them as a core constituency.

At a MAGA rally in early 2019, for instance, Donald Trump sneered at his opponents for their hostility to the vehicular choices of blue-blooded Americans.

The conventional narrative presents the modern automobile and its internal combustion engine as inevitable.

Earlier, Trump’s Transportation Secretary Elaine L. Chao had published, along with Andrew Wheeler, now Administrator of the Environmental Protection Agency, a statement in the Wall Street Journal in which they pledged to roll back Obama-era vehicle emissions. Their title: “Make Cars Great Again.”

Yet, before we accept car culture as evidence of innate working-class conservatism, we might note that Americans only named their “love affair” with the automobile in 1961. In that year, DuPont—owner of 23 percent of General Motors—sponsored a TV documentary on the early history of American motoring titled Merrily We Roll Along. It is the film’s narrator, Groucho Marx, who first references the public’s “love affair” with cars. After the screening, the phrase entered public discourse, and never left. In historian Peter Norton’s words, the term “was introduced by the show and seen by millions of people, who eventually forget it was invented.”

Furthermore, it was coined precisely because DuPont knew full well that Americans hadn’t immediately fallen in love with cars. On the contrary, the car culture we now take for granted, both in the US and around the world, came into being only after a huge struggle by the auto industry, not just against other less destructive transport options but also against the environmental consciousness of ordinary people.

As you would expect, the car’s first enthusiasts were the wealthy, specifically powerful men able to afford an expensive and initially impractical machine. In 1902, one US motoring journal explained that, “in Europe, it is openly recognized that the main excuse for the speed mania is the desire to feel new sensations and juggle away the emptiness of a purposeless life.”

The early vehicles were mechanically unreliable and limited as to where they could drive. The problem wasn’t simply an absence of sealed surfaces. At the beginning of the 20th century, the car couldn’t dominate city streets in the way it does now. Roads were public places; they belonged to everyone, and everyone used them.

“Busy streets were . . . much like crowded city parks today,” says Norton, “places welcoming diverse uses, provided users did not obstruct or menace others.”

The onus was on the traveler not to hit others. Elderly pedestrians walked where they chose; children used the street as a playground.

The first cars threatened this common understanding, and did so with great violence. In 1925 alone, cars killed 21,000 Americans, most of whom were pedestrians. By our standards, that number might not seem huge. In the Atlantic, Edward Humes points out that, “If [today’s] US roads were a war zone, they would be the most dangerous battlefield the American military has ever encountered . . . [since] annual highway fatalities outnumber the yearly war dead during each of Vietnam, Korea, Iraq, Afghanistan, the

But in the 1920s, when a child died on the road—and many of the dead were children—passers-by didn’t blame adults for lack of supervision, as they might do today. They thought kids had a right to play. Instead, they blamed the (usually wealthy) drivers and their cars for selfishly monopolizing a space that had previously belonged to everyone.

The upper classes used automotive violence to drive the working classes and urban poor from the streets—relatively wide open spaces in dense urban neighborhoods. Vigilantes responded with attacks on the millionaire motorists who raced through working-class neighborhoods. Drivers were stoned and, in at least one case in Germany, beheaded by piano wire strung across the street.

Across America, people demanded action. In Cincinnati, in 1923, 42,000 people signed a petition demanding that cars be prevented from traveling more than 25 miles per hour. Many experts and the media agreed: in 1920, the newspaper Illustrated World declared that “every car should be equipped with a device that would hold the speed down to whatever number of miles stipulated for the city in which its owner lived.”

Such proposals—and the early anti-car agitation as a whole—might sound foolish today. Certainly, the conventional narrative presents the modern automobile and its internal combustion engine as inevitable, an invention embraced by the populace because of its innate usefulness.

But that is a retrospective projection.

During the last years of the 19th century, a variety of new machines had presented themselves, with the “hydrocarbon explosion” engine (as some writers styled it) often contrasted unfavorably against other innovations. As Albert points out, of the 4,200 vehicles produced in the US by 1900, fewer than 1,000 relied on internal combustion. The majority used either steam or electricity.

In many ways, the electric vehicle seemed the most promising technology. The early models could travel, on average, about 40 miles on a charge, a distance entirely adequate for early motorists constrained by crowded streets. They were relatively slow, but they were silent, accelerated quickly and braked more effectively than gasoline vehicles. In a demonstration race in Philadelphia in 1908, a Studebaker electric showed it could outmatch a comparable internal combustion vehicle in everyday conditions, partly because it didn’t need to be cranked after every stop.

Furthermore, as inventor Pedro Salom explained in 1896, electric cars didn’t emit fumes while “all the gasoline motors we have seen belch forth from their exhaust pipe a continuous stream of partially unconsumed hydrocarbon in the form of a thin smoke with a highly noxious odor.”

Alongside Henry Morris, Salom founded a business that became the Electric Vehicle Company (EVC). The EVC produced a machine called the Electrobat, featuring a comfortable cabin modeled on a London Hansom cab and an electric engine with a range of 25 miles. More importantly, while the EVC did sell cars, it also offered an integrated transportation system, in which customers could hire an Electrobat by the day, the month or the mile. The machines could be recharged at stations using an ingenious method in which batteries could be swapped within 75 seconds. In between trips, they were stored in a central location.

By 1902, some five billion people traveled on streetcars in the US across some 35,000 kilometers of tracks.

By January 1899, 55 cabs were in operation. The company expanded to New York, a move seen as preparatory to a nationwide and even global operation. As one contemporary paper noted, Morris and Salom’s intention was clear: “a worldwide network of branch EVCs.” According to historian David A. Kirsch, the EVC, at its height, was “both the largest vehicle manufacturer and the largest owner and operator of motor vehicles in the United States.”

But, like Uber and other ride-share services today, the EVC business model depended on rapid expansion, since the service could only become part of everyday life if the company possessed a sufficient mass of vehicles. In the era of Teddy Roosevelt’s “trust busting” rhetoric, the EVC’s plans for a transport monopoly created powerful opposition both from corporate rivals and the general public. Then, in 1899, a newspaper showed that the company had underpinned its growth with a fraudulent loan, a revelation that sent stock plummeting until the business collapsed.

Yet the disintegration of the EVC—a collapse so total as to wipe the Electrobat from historical memory—didn’t reflect a technical inadequacy in electric vehicles. By all accounts, the Electrobat performed quite well. “[T]he business failed the machine,” writes Albert, “rather than the other way around.” Even by the 1920s, the internal combustion engine wasn’t the only game in town. To traffic campaigners, the private car seemed contingent rather than inevitable. Why, they thought, should wealthy drivers be allowed to run down pedestrians at high speed when so many other options were available?

At that time, streetcars operated in most American cites, with the old horse-drawn trolleys now powered by electric motors. By 1902, some five billion people traveled on streetcars in the US across some 35,000 kilometers of tracks. The system was safe, efficient and pollution-free. Many people saw the expansion of streetcars as the most obvious way of moving the public around a modern city, especially since, as one contemporary newspaper put it, “the new problem created by the automobile . . . [is] will my child come home from school today alive and whole?”

Indeed, the campaign against the carnage wrought by cars coincided with a significant sales slump in 1923, despite the economy recovering from recession. “Auto industry insiders warned of coming saturation of demand for automobiles,” explains Norton. “Americans would soon have all the cars they wanted; many—especially people in cities—would never want them.”

Where Have All the Sin-Eaters Gone? (We Could Use Some Right Now) 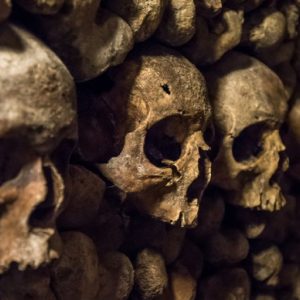 Where Have All the Sin-Eaters Gone? (We Could Use Some Right Now) Argyle, the sin-eater, came into being in the hard winter of 1984. My sons were watching a swashbuckler on television—The...
© LitHub
Back to top