How We See Iran: A Brief History of Fictions at a Distance

It is Wednesday afternoon, November 20. Once again, Iran made the news and, in my experience, that can never be a good thing. Reports from the latest protests only come from Iran in a trickle, since it has been over 90 hours since the internet fell into a state of almost total blackout in the country.

The latest episode started last Friday, when gas prices shot up overnight and protesters took to the streets in several cities across the country. Since then, I have been watching the videos posted online of people shutting down their engines to block roads and highways, crowds singing slogans in protest to the new prices, and fires sending black smoke into the air.

I could go on writing about all that. I could describe the men and women in the videos, or I could write about the short clip in which two sets of hands slice hunks of cheese to spread on flat bread as a woman’s voice explains that the group is making cheese sandwiches for the protesters who will be spending the night on the street until this whole issue is resolved. I could do that. But should I?

Perhaps like many other places in the world, living in Tehran means a lot of boring stuff: getting up early in the morning, having breakfast, getting dressed, riding the bus or taxi or subway, going to work or school for a certain number of hours, and getting back home on the bus, taxi, or the subway. Day after day after day.

Other, less frequent incidents sometimes disrupt this mundane rhythm: your father needs a spine MRI; your daughter wants some cardboard for her school project; you buy a new controller for your now-old Xbox 1; your uncle and his family come to stay with you for three days; you meet your boyfriend at a park close to your school before going home and talking to your best friend about him.

One reason I am a fiction writer and not a journalist is that I cannot convince myself that by clipping reality I would not be distorting it.

Then there are those newsworthy incidents: the government tests new long-range missiles; a strong earthquake leaves scores of casualties; a drug trafficker is publicly hanged; the president denies the Holocaust. Or those events that become history: the 1953 Coup; the 1979 Islamic Revolution; the hostage crisis; eight years of Iran-Iraq war; the presidential election protests of 2009 and 2010.

I was born and raised in Iran, and I lived there for three decades—I know firsthand that life there is unlike the fractions of misery and fury I see in these short videos and in what I read in news stories. I wasn’t dodging bullets and running for my life. Life looked like a nuanced, multifaceted picture, one that I don’t see in the media. Yes, I did almost get arrested for snapping a bunch of photos of burned motorcycles and hectic, uneasy streets, and I did live my childhood as the war between Iran and Iraq blasted from the TV and radio and claimed the lives of young and old men. But I also kicked striped plastic balls in street soccer with my friends, I hiked in the mountain trails, I sang Tom Waits’ “Gun Street Girl” with my colleagues on my walk home after work, I biked around the city like crazy, I played music, and I spent nights eating, drinking, and dancing with a group of friends, the like of which I expect I will never find again in my life.

I play some of the videos. Most are under one minute. They are slivers of the protests, themselves thin slices of daily life. They are cut out and juxtaposed with other similar excerpts. What would it mean if the camera had followed the young woman who watched the protest and went home, in place of the young man who was shot and fell to the ground? What if we followed the middle-aged man who jumped over the guardrail and walked away instead of the young woman who tore down a banner bearing the image of an authority figure?

In his book Metahistory (1973), Hayden White argues that historical writing shares composition techniques with narrative prose. Even the mere fact that the historian cherry-picks events from the infinite continuum of life and rearranges them in a sensible order is narrative logic. One reason I am a fiction writer and not a journalist is that I cannot convince myself that by clipping reality I would not be distorting it. Distortion and ideological meaning-making is in the nature of the media.

Rightly or wrongly, I may content myself that fiction absolves me of some of the responsibility to be true to reality. But even then, if some responsibility still remains, no matter how infinitesimal, the decision remains for me to make: where to cut, what to include, where to put the beginning and end?

I re-watch the videos from before the internet shut-down. If I wrote about these or similar incidents in the past, would I be reproducing an unrealistically violent distortion that becomes the image of Iran? And if I didn’t, would I be ignoring the struggles of people braving multitudes of local difficulties on top of international sanctions? As a writer from a culture and literature that are underrepresented in the Western media and canon, these questions resurface constantly in my mind.

The characters in my novel were born, grew up, and grew old in Iran in a span of nearly 70 years during which, the Coup, the Revolution, and the War happened. Rallies, crackdowns, arrests, speeches, and slogans were abundant in this historical period, but more numerous still were the millions of people who lived their lives and passed without leaving a trace in history. How does one weave a cohesive novel out of an incomprehensibly large universe of interconnected human actions without reducing them to stereotypes of violence and unrest?

My answer was to adopt an approach to accentuate the fictional in “historical fiction” almost to the extent of ahistoricity. I played with history. I twisted it to show that it’s a construct and that is how it should be read. But, of course, I didn’t make my novel all rainbows and unicorns either. I couldn’t. Because fire is real.

Checking the news later that same day, there is little reliable news on the internet about what is happening. Iran may have entered its sixth day of gas protests. Things may just as well have quieted down. What can be found is mainly conjecture by outsiders based on unconfirmed reports that may well be rumor.

I still don’t have answers to my questions. I am flitting from video to video still thinking about frames, what they show and what they leave out.

Ali Araghi is an Iranian writer and translator and the winner of the 2017 Prairie Schooner Virginia Faulkner Award for Excellence in Writing. He has published stories and translations in Prairie Schooner, The Fifth Wednesday Journal, Asymptote, and Hayden’s Ferry Review, among others. He earned his MA in Ancient Cultures and Languages at the University of Tehran and his MFA from the University of Notre Dame, and has translated Samuel Beckett and Richard Brautigan into Persian. His debut novel, The Immortals of Tehran, will be published by Melville House Press in April, 2020. 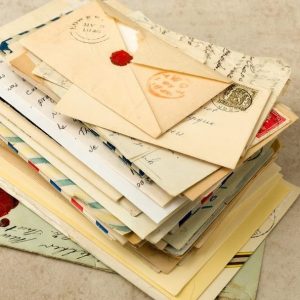 One day in April, 1939, a man named Emerson Pickerell dropped an unopened letter in front of a stationer’s shop in Great...
© LitHub
Back to top