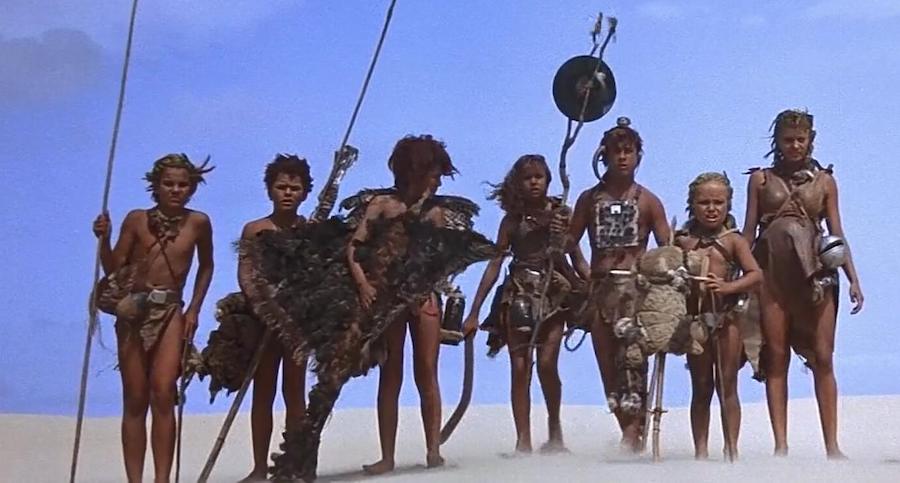 Two Graphic Novels Ask:
Why Have Children in an Uncertain World?

On Climate Collapse, Alienation, and the Ethics of Becoming a Parent

In 2017, I was filled with dread about nuclear war. Every night, when my commute home concluded with a short walk through my southwest DC neighborhood, I tried not to picture bombs falling on Congress, just a few blocks north. I pictured my family in California huddling for shelter from radioactive rain as black clouds cloaked Los Angeles. When I called my parents, I probed them for advice they’d gleaned during the Cold War. “You have no control over it, so why worry?” my mom said. The thought only filled me with more terror.

As time moved on, my fear of nuclear war faded, replaced by paranoia about catastrophic earthquakes, racing forest fires, and rising sea levels. It’s difficult to think about the future when you’re gripped by anxiety like that. Yet, faced with constant emergencies, the future can seem like the only thing worth thinking about at all.

In September, Emma Lim, an 18-year-old activist, publicly announced her decision not to have children due the escalating climate change crisis. Lim’s campaign, dubbed #NoFutureNoChildren, has attracted more than 5,200 supporters who similarly pledged to forego parenthood as of October. While not everyone will take this step publicly, half of the public foresee a worse standard of living for their children, and online forums like r/childfree provide a safe space to discuss doubts about the future. When I picture my future children, it’s impossible to picture their government leaders or what kind of weather they’ll be forced to endure; the news cycle is a highlight reel of nightmare fuel, churning out fresh and troubling updates every hour of the day.

These unknowable questions are at the heart of two graphic novels: Eleanor Davis’s The Hard Tomorrow and Sylvia Nickerson’s Creation, both released this fall. In The Hard Tomorrow, an activist named Hannah longs for a baby, despite preparing for war and environmental collapse that seem inevitable. Hannah and her friends chase an ever-elusive future without any reassurance that its promises will ever materialize.

For Creation’s anonymous narrator, the future isn’t an abstract concept. As a single mother surviving postpartum depression, she becomes increasingly attuned to the injustices that plague her home in Hamilton, Ontario. Once called “the ambitious city,” Hamilton has fallen to the twin threats of widespread economic depression and gentrification. Its once-bright future has culminated in a difficult present that the narrator must navigate as she cares for her infant son.

Though the two graphic novels reflect different facets of the same generalized anxiety about the future, Davis and Nickerson’s artwork is visually distinct. In The Hard Tomorrow, Davis uses crisp, deep blacks and pure whites for characters who are equally solid in their convictions. Hannah’s energy leaps off the page, her vibrancy conveyed through intricate details like her embroidered clothes and curly hair.

Nickerson’s main character couldn’t be more different. She observes her surroundings through the blur of postpartum depression, appearing as a soft, featureless outline wearing a baby carrier. As she moves through the city with her son, she wades through intentionally murky washes of gray that dull the edges of the city’s grim details. When details do break through—in interstitial pages that display the city’s crisp geometry or in a realistic portrait of a murdered homeless woman—they only call more attention to the narrator’s difficulty maintaining secure boundaries between herself and her environment.

Despite these differences, The Hard Tomorrow and Creation grapple with similar issues and themes. In particular, infants invite both deeply human connection and painful isolation in both novels. The deeply human experience of childbirth and parenting cuts across differences, allowing characters to discover unexpected moments of empathy. Yet parenthood can also be an alienating experience, putting strain on mothers’ relationships with their communities and themselves.

“Why the fuck would you want to have a kid?” Gabby explodes. Her mind immediately flashes to the chemical weapons they’ve been protesting.

Throughout The Hard Tomorrow, the prospect of having children helps characters find common ground—and pushes them apart. Early in the book, Hannah is pulled over because she is distracted by a couple out for a stroll with their baby. Ever bubbly and open, she blurts her desire for kids to the cop, who cracks a joke about her own children. The moment cuts through the two women’s roles—cop and activist—and allows them to relate, however briefly.

Later, the incident becomes a point of gentle contention between Hannah and her closest friend, Gabby. “That’s cool,” Gabby responds. “I like funny fascists.” As the two banter, it becomes clear that Hannah’s attraction to Gabby runs deeper than friendship. But just when their chemistry seems likely to blossom into something more, Gabby discovers Hannah’s attempts to become pregnant are more than just conjecture. “Why the fuck would you want to have a kid?” Gabby explodes. Her mind immediately flashes to the chemical weapons they’ve been protesting. “Just so you can get vix’d together in five years?”

The argument reveals a deeper division in how the two view their shared activism. “What do you think everybody’s been fighting so hard for?” Hannah pushes back. “For a peaceful future, Gabby! For the future!”

This sense of certainty is absent in Creation. In the novel’s opening pages, the narrator greets the reader with restlessness. “When my son was three months old, my mom asked me if I could imagine what my life would be like if he hadn’t been born,” she confides in the opening panels. Her mundane fantasies—drinking a latté, surfing the internet—accompany panels that show her diligently changing, bathing, and rocking her son to sleep. The effect is jarring, driving home the reality that infants require sacrifice and change.

Later, the narrator reflects on how having a baby impacts her career as an artist when her son’s bedtime coincides with the city’s monthly Art Crawl. “Lately, I spend the evening in the back room, nursing Toby to sleep,” she muses. “I feel good that I’m still a part of things.” The next frame shows her crouched in a darkened back room, removed from the people browsing her work.

Still, the narrator’s son awakens her to new forms of connection. As her son becomes a toddler, he becomes obsessed with garbage. Their walks turn into tours of the city’s bins, trucks, and dumpsters, a normally overlooked aspect of Hamilton transformed by curiosity and wonder. One afternoon, the narrator is horrified to discover a body in one of the neighborhood’s dumpsters. It turns out to be a homeless man taking shelter for a nap. “He’s fine,” a passerby reassures her. “Just sleeping.” The instant of connection collapses the distance that previously existed between the narrator and the people around her. Though painful, her postpartum depression and motherhood force her to view the city and its people through a new lens.

The narrator’s experience of motherhood also casts her own parents in a clarifying light. Her family originally moved to Hamilton so her father could work at a company that built nuclear reactors—and in doing so, secure a better life. But the same nuclear power that brought jobs came with a darker side. The narrator lives less than two kilometers from a toxic waste site, and both of her parents have cancer, both of them part of the first generation likely to die at a younger age than the one before it. “At the rate things are going now I’ll probably have two cancers by the time I’m forty,” the narrator says. “Who knows what will happen to Toby.”

By the end of The Hard Tomorrow, Hannah’s life has taken a turn for the worse. Her activist community has fallen apart, and Gabby has fled to Canada. Her gentle, but unreliable husband accidentally shoots his best friend—a survivalist who openly hates women—and his grief spills into a brief and shocking moment of domestic violence for which he never takes accountability. Hannah endures her pregnancy in the cold truck, the house still an unfinished frame when her baby arrives in the spring. The Hard Tomorrow’s final pages show Hannah’s newborn son slowly opening his eyes and taking in the world. Without stability or community, and with many pages of violence and disruption behind them, the family’s future remains an uneasy question.

At first, I couldn’t explain why the prospect of having children once again represented the pinnacle of my anxiety.

Creation follows the opposite trajectory, as the narrator eventually identifies her struggle with overwhelming sadness as postpartum depression. The panels from the beginning of the novel, which show her caring for her son, reappear with a new message. “This is a great moment in life,” the narrator tells herself and an imagined audience of fearful new mothers. “Be patient if you feel anger, fear, grief, or frustration. All things change.” In the novel’s final frame, the narrator’s son is finally visible in detail for the first time. There are two bikes outside, implying that her isolation has finally ended.

Eventually, my persistent fears faded, too. Months and years slipped by before I began to worry about my future children again. At first, I couldn’t explain why the prospect of having children once again represented the pinnacle of my anxiety; I’m not planning to have children immediately, or even soon.

Then I realized that the reason was in my headphones all along. In July, indie rock band Strange Ranger released their third album, Remembering the Rockets, and I kept it on a constant loop throughout the summer. On the record, vocalist Isaac Eiger’s lyrics dwell on flaming question mark our planetary future has become. “Daddies with their kids,” he sings on “Planes in Front of the Sun.” “I still want that, I still feel sick.” My favorite track, a three-and-a-half minute, synth-heavy song called “Living Free,” contains a haunting question: “What if I just want a family?”

Neither The Hard Tomorrow nor Creation offer definitive or easy answers. But by engaging the question, both graphic novels map new imaginative space in which to consider it. In doing so, they affirm that the enormous question of whether or not to have children in an unstable world isn’t something anyone has to ponder alone.

Michelle Delgado is a journalist in Washington, DC. Her culture reporting has been featured in The Atlantic, CityLab, VICE, and others.

5 Small Press Audiobooks To Give As Gifts This Year 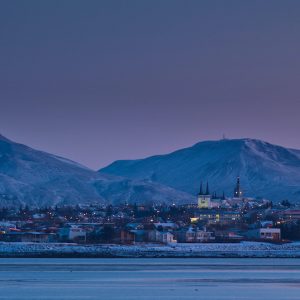 In Kaffibarinn, a dark, wood-paneled bar in Reykjavik filled with Scandinavians sipping on artisanal beers, looking impossibly...
© LitHub
Back to top