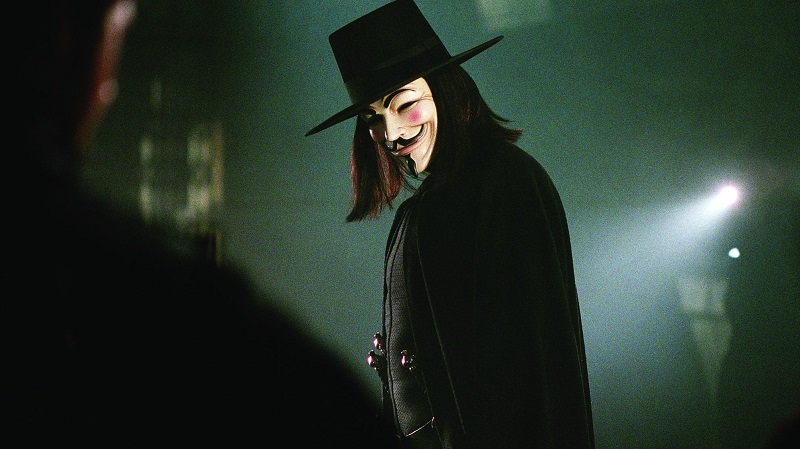 Remember, Remember Where the Word ‘Guy’ Comes From

Allan Metcalf on the Evolving Legacy of Guy Fawkes

What about Guy Fawkes? As “guy” and “guys” become ever more familiar, is he remembered as the original Guy, or is he left behind?

The answer is definitely the latter, at least for the United States and in some instances at least also the rest of the English-speaking world.

During the 20th century, most users of “guy” and “guys” had not the slightest awareness of its connection to Fawkes. Severing the connection, in fact, was necessary to allow the word to acquire positive connotations. Toward the end of that century, however, as the original reason for bonfires on November 5 faded from memories even in England, the face of Guy Fawkes became more familiar than ever.

This was thanks to V for Vendetta, a graphic novel written by Alan Moore, illustrated by David Lloyd. It began as a serial in an obscure comic in England in 1982. The finished story was published in one volume by DC Comics in 1988. V for Vendetta imagines a Labour electoral victory in the 1980s that develops into a ruthless Fascist government in the 1990s, one that keeps the population in thrall by television propaganda and ruthless force. Opposing the entire Fascist regime is a lone rebel, who develops skill with all manner of weapons as he miraculously manages to escape from a government concentration camp. He calls himself simply V, the V standing for Vendetta as in the title. And he goes about single-handedly destroying the entire government, thus freeing the population of England and enabling an anarchist state.

Moore and Lloyd made this character a modern Guy Fawkes. In the very first chapter, after rescuing a young woman from sexual assault and worse by government police, V recites to her the familiar “Remember, remember, the fifth of December, gunpowder, treason, and plot. I know of no reason why gunpowder treason should ever be forgot.” And with that they watch as the houses of Parliament blow up, followed by a V in fireworks.

During the 20th century, most users of “guy” and “guys” had not the slightest awareness of its connection to Fawkes. Severing the connection, in fact, was necessary to allow the word to acquire positive connotations.

What is particularly memorable about the character of V is his costume: a cloak with daggers, a hat like the fashionable one depicted in contemporary illustrations of Guy Fawkes, and a face mask that is a simplified version of Guy’s face in those contemporary illustrations. The one difference is the smug smile on V’s mask. The smile changes the original Guy’s fierce look to a lighthearted cheerful one, making him appear to be laughing as he goes about terrifying and destroying officers of the Fascist regime.

After a year of successful surprise attacks, the government collapses and freedom reigns. V himself dies, but the young woman puts on his mask and arranges a “Viking funeral” for V, complete with blowing up the prime minister’s residence on Downing Street.

This Guy Fawkes mask reached a larger audience in the 2006 movie made from the book, featuring Natalie Portman as a much stronger version of Evey and Hugo Weaving as V. The time moves ahead to remain in the near future. The destruction of the Houses of Parliament takes place in modern fashion: In a disused line of the Underground, V sends an empty subway train filled with explosives under the building. This makes for a grand finale of explosions and fireworks amid Tchaikovsky’s 1812 Overture, witnessed by angry citizens in the streets, all wearing Guy masks. The movie was changed so much that Moore refused to endorse it or have anything to do with it. But the connection to Guy Fawkes remains, and so does the mask.

Both the novel and the movie represent the complete transformation of Guy Fawkes from diabolic arch-villain of 1605 to heroic freedom fighter of the present day. Both versions explicitly refer to the original Guy, thus adopting the original Guy’s attitude toward evil authority, and making him succeed where the original Guy did not.

Unlike his collaborator Moore, David Lloyd approved of the movie. He told BBC:

The Guy Fawkes mask has now become a common brand and a convenient placard to use in protest against tyranny, and I’m happy with people using it. It seems quite unique, an icon of popular culture being used this way. My feeling is the Anonymous group needed an all- purpose image to hide their identity and also symbolize that they stand for individualism.

V for Vendetta is a story about one person against the system. We knew that V was going to be an escapee from a concentration camp where he had been subjected to medical experiments but then I had the idea that in his craziness he would decide to adopt the persona and mission of Guy Fawkes, our great historical revolutionary.

As Lloyd said, the book and the movie made the Guy Fawkes mask an icon for protests against governments and institutions perceived as evil. During the Occupy Wall Street movement of September 2011 and subsequent “we are the 99 percent” protests against wealth and income inequality, some protesters wore V masks to show their determination and unity, as well as to conceal their identity.

The masks are made by a variety of companies in a variety of styles, but the mask used in the movie is copyrighted by Time Warner and earns a royalty on every mask sold. It’s also a popular mask for Halloween.

The book and the movie today are the best- known current versions of Guy Fawkes, but they weren’t the first. The change in attitudes toward the original Guy began about 200 years ago. Early in the 19th century, James Sharpe notes, Fawkes sometimes had a role other than simply the villain of a dramatic or literary work.

Both the novel and the movie of V for Vendetta represent the complete transformation of Guy Fawkes from diabolic arch-villain of 1605 to heroic freedom fighter of the present day.

In 1835, for example, the “comic pantomime” called “Harlequin and Guy Fawkes: Or the 5th of November” had its premiere at Theatre Royal Covent Garden. A character named “Winter Discontent” gets Fawkes’s help in blowing up the House of Parliament:

With pantomime and rhymes like that, it’s hard to be frightened by this caricature of Guido.

In the mid-19th century, Guy Fawkes was a character in another pantomime comedy, “Guy Fawkes or a Match for a King.” The plot is updated to modern times, with the chief plotter Catesby now a director of the Accidental Death Insurance Company, worried about having to pay life insurance for a character who would be likely to attend the opening of Parliament. Catesby writes him a warning letter. “What is totally lacking,” Sharpe says, “is any reference to the more serious undertones of the Plot”:

When crackling faggots make the bonfire hot,
Let prejudice with faggots be faggot, [sic]
And let tar barrels with their roasting ribs,
Present the only objects for your squibs.
Let old antipathies in crackers end,
And polemic with fire balloons ascend.

In quick order in the 19th century, Guy Fawkes changed from villain to hero in works of drama and fiction. It helped that Catholics were no longer the enemy.

In 1840, in the novel Guido Fawkes: Or, the Prophetess of Ordsall Cave, Fawkes appears as a champion of the poor against “haughty masters.” “Ye look upon the poor as slaves,” this Fawkes says in one of his milder lines, “and set up rulers over them; any law you make is but to keep them more in subjection.” And he concludes, “Ye are going full gallop to the devil!”

William Harrison Ainsworth’s 1841 novel Guy Fawkes, or the Gunpowder Treason: An Historical Romance keeps Fawkes in the role of plotter but he is sympathetic, including a love match leading to marriage. As he prepares for the explosion, he declares, “Men cannot read my heart, but heaven can; and the sincerity of my purpose will be recognised above.”

As the 19th century goes on, Guy Fawkes becomes more distant and less important, for example, in the 1888 novel Return of the Native by Thomas Hardy. The background for the first day of the narrative happens to be November 5, where on Egdon Heath that evening some 30 fires are lit by furze carriers. That would seem to be a remembrance of Guy Fawkes, but Hardy spurns that interpretation as too modern:

It was as if these men and boys had suddenly dived into past ages, and fetched therefrom an hour and deed which had before been familiar with this spot. The ashes of the original British pyre which blazed from that summit lay fresh and undisturbed in the barrow beneath their tread. The flames from funeral piles long ago kindled there had shone down upon the lowlands as these were shining now. Festival fires to Thor and Woden had followed on the same ground and duly had their day. Indeed, it is pretty well known that such blazes as this the heathmen were now enjoying are rather the lineal descendants from jumbled Druidical rites and Saxon ceremonies than the invention of popular feeling about Gunpowder Plot.

To this day a flicker of interest in the original Guy remains, more in England than in the America that threw off its allegiance to the British crown. But it’s now completely separate from the ordinary words “guy” and “guys” we use every day. And so, guys, it’s time to get back to the rest of the story of those transformed words. Excerpted from The Life of Guy: Guy Fawkes, the Gunpowder Plot, and the Unlikely History of an Indispensable Word by Allan Metcalf. Copyright © Allan Metcalf 2019. Reprinted with permission from Oxford University Press.

Allan Metcalf is Professor of English at MacMurray College, former executive secretary of the American Dialect Society, and a forensic linguist. He is the author of OK: The Improbable Story of America's Greatest Word and The Life of Guy: Guy Fawkes, the Gunpowder Plot, and the Unlikely History of an Indispensable Word, as well as six other books on language.

How to Throw a Shower for a Novel 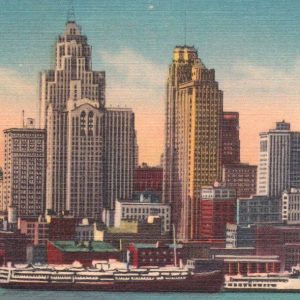 As I spent several years in Detroit following a small group of residents in the aftermath of their city’s bankruptcy to write...
© LitHub
Back to top