TODAY: In 1910, French author Colette begins to publish her novel The Vagabond in serial form.

Emma Straub’s advice for what to wear to a book launch • Spending time in Joy Williams’s celestial waiting rooms • What we’ve lost (and gained) with virtual reading tours • Jenna Fischer and Angela Kinsey on finding creative freedom in The Office • Why is Italo Calvino so beloved outside Italy? • When Biggie Smalls and Puff Daddy made Ready to Die • Unearthing the history of pre-NBA African American basketball • Natalie Diaz on the Mojave language and where English fails us • How “My Old Kentucky Home” became ubiquitous • Rachel M. Harper on learning a love of libraries • The tale of an unlikely American odyssey • On the “gnostic ironies” of Nathaniel Mackey and Fanny Howe • Victoria Shorr on the art of the novella • Peter Serpico on connecting to his Korean heritage through food • TANAÏS on the politics of caste and feminine joy in Satyajit Ray’s Charulata • Finding the spirit of Ukrainian resistance in the poetry of Marjana Savka • How Greenwich Village bohemians found their way to Provincetown • On Willa Cather’s long-term relationship with Edith Lewis • The quick and dirty on foot fetishes • Putsata Reang on telling her own origin story as a refugee • Naheed Phiroze Patel on the significance of life-long projects • How growing up in the digital age affects young minds • When Sidney Poitier went to the Moscow Film Festival • On the role of stillness in the creative process • What the rise of Insta-poets means for culture • Founding the first English-language library in Gaza • Tracing the evolution of free speech on the internet • Using songs and sermons to structure a memoir about fighting for Black lives • Eimear Ryan in praise of women who compete on their own terms • David J. Dennis Jr. on growing up with a complicated man • Can national service stitch America back together? • How do we give names to nature? • On the many strange uses of the letter X • Why the novelist Ann Hood became an airline stewardess

Nothing Burns as Bright as You by Ashley Woodfolk, Read by Amani Minter 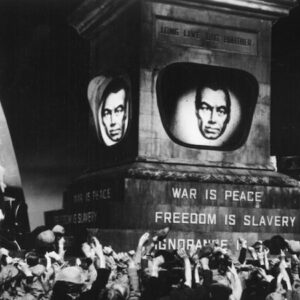 In very 1984 news, Belarus has banned the sale of 1984. Belarusian weekly newspaper, Nasha Niva, reported that security...
© LitHub
Back to top