How Bill Bryson’s A Walk in the Woods rocked the Appalachian Trail community • Aminatta Forna on the pains of insomnia • Rebecca Rego Barry digs through Marlon Brando’s personal library • After our pandemic year, Marta Bausells puzzles over the conundrum of time • Why are we so afraid of the dark? • Edward Slingerland on the science behind alcohol as muse • Larissa Zimberoff on the history of turning waste into edible food • Alexander Lobrano recounts a dinner out with Giorgio Armani • Anne Sebba on the many fictional afterlives of Ethel Rosenberg • Brian Stelter calls for a reckoning at Fox News • Kathryn Lofton deconstructs Edith Hamilton’s Mythology for modern times • Traversing the most dangerous region of the Norway coast • Gillian Osborne on color theory and William Blake’s “The Ecchoing Green” • Libby Copeland on America’s obsession with genealogy • E.J. Levy on being late to the party, in both publishing and parenting • Andy Martino digs into the cheating scandal that nearly ruined baseball • “There is no place on Earth where human presence does not cast a shadow” • Brian Hall on approaching a writing project with the mentality of a carpenter • Tiya Miles considers the importance of material ownership for enslaved African Americans • How Harold Pinter reinvented the contemporary period drama • Ly Tran on finding home by the water, from the Mekong Delta to Coney Island • Goldberg on the young doctors who went from medical school into a pandemic • What can we learn about the COVID-19 aftertimes from the period following the Black Death?

Leaving the Atocha Station, My Year of Rest and Relaxation, Song of Solomon, and more rapid-fire book recs from Zaina Arafat • “I think no one but Mailer could have dared this book.” Joan Didion on Norman Mailer’s Pulitzer Prize-winning “true crime novel,” The Executioner’s Song • N. K. Jemisin’s Inheritance Trilogy, Toni Morrison’s Beloved, and more rapid-fire book recs from K-Ming Chang • New titles from Rivka Galchen, Lionel Shriver, Akwaeke Emezi, and Lawrence Wright all feature among the Best Reviewed Books of the Week 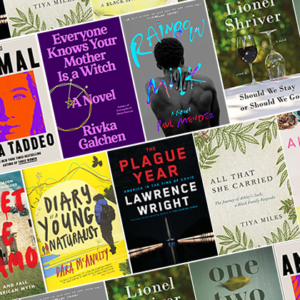 Rivka Galchen’s Everyone Knows You Mother Is a Witch, Lionel Shriver’s Should We Stay or Should We Go, Akwaeke Emezi’s...
© LitHub
Back to top