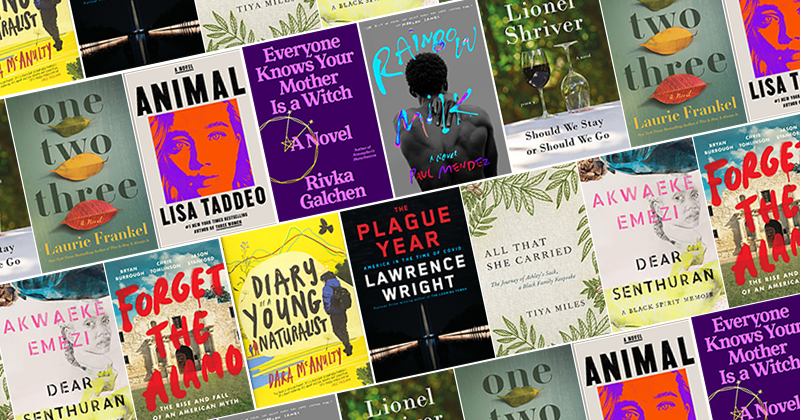 Rivka Galchen’s Everyone Knows You Mother Is a Witch, Lionel Shriver’s Should We Stay or Should We Go, Akwaeke Emezi’s Dear Senthuran, and Lawrence Wright’s The Plague Year all feature among the Best Reviewed Books of the Week.

1. Everyone Knows Your Mother Is a Witch by Rivka Galchen
(FSG)

“The comedy that runs through Everyone Knows is a magical brew of absurdity and brutality. Galchen has a Kafkaesque sense of the way the exercise of authority inflates egos and twists logic … There’s real sorcery here, but it arises only from the way Galchen fuses ancient and modern consciousness … testimonies present a jaw-dropping catalogue of anxieties, irritations and non sequiturs—all the various ways human beings can make themselves believe whatever they must to avoid acknowledging that they’re afraid, that they’re jealous, that they can’t control their lives. Late in the novel, all the most bizarre accusations are enumerated in a list that could pass for Renaissance Twitter … The fate of Kepler’s mother is a matter of historical record, but Galchen arrives at something the facts can’t catch: The exhaustion, the bone-weariness of fighting such misogyny year after year. It’s enough to break a weaker person.”

“[An] erotic and fearlessly explicit debut … the impact of Mendez’s frank descriptions of sex acts is not amplified through multiple tellings. Rather, it suffers diminishing returns. The prose is more rewarding when recounting, with tenderness, how Jesse arrives on the streets … The most successful areas of this immersive semi-autobiographical story are where it explores the intersection between Jesse’s performance of sex and his performance of blackness … his emotional intelligence is stunted, and Mendez shows how it’s possible to find a route to self-knowledge through an excited interrogation of song lyrics. The downward slide of unprotected sex and hedonism, which results in physical injuries, leads Jesse to have an epiphany of sorts.”

3. Should We Stay or Should We Go by Lionel Shriver
(Harper)

“Have patience with the first chapter of Lionel Shriver’s new novel … As [the protagonists] go over the pros and cons, they sound less like characters than authorial mouthpieces. But their exchange is actually a canny setup for a wildly inventive and sometimes hilarious novel on a sober subject … She also creates a composite portrait of a married couple and their three children that, for all its contradictions, hangs together with glorious plausibility. Indeed, by paying as much attention to what Kay or Cyril don’t do in some scenarios, she digs into corners of their characters that no single account of ‘what happened’ could ever reveal. Twelve different stories unfold—and you need all 12 … Shriver may be a contrarian—but she has a sense of humor about it. More to the point, she never lets her politics interfere with the sheer zest of her imagination. The fugue-like pleasures of the novel, as key passages and images recur in ever-shifting patterns with ever-differing outcomes, are intense … a delight to read—even as it leaves you wondering if maybe now is the right time to get hold of a lethal cocktail.”

“… winning and amiable … The end of the story does seem a bit rushed, and one might wish that the townspeople weren’t so relentlessly good and that the villains weren’t so cartoonishly villainous, but then one might feel waspish and small-hearted. The full and simple pleasures of Frankel’s luscious prose lull the reader into rooting for the good people of Bourne and these plucky heroines. After all, doesn’t rooting for uncomplicated integrity feel good these days?”

Read an excerpt from Animal here

“… propulsive, fiercely confident … To her great credit, Taddeo resists the pressure—rampant these days—to craft a likable, ‘relatable’ female narrator. In Animal she gleefully does the opposite … Taddeo can write a killer sentence…She’s at her best when exploring the murky, sometimes twisted relations between men and women … If all this sounds far-fetched, it is. Taddeo isn’t a subtle writer. But what she lacks in nuance, she makes up for in bravado, psychological acuity and sly wit. Joan’s voice is so sharp and magnetic that the reader will follow her anywhere—even to the dark and increasingly unbelievable depths her creator sends her … The world of Animalis relentlessly bleak. If its particulars don’t always make sense, its values at least remain consistent … Writing a novel is a shell game—an elaborate con in which the author aims to dazzle with what she does well, in hopes of distracting the reader from what she can’t do at all. Taddeo’s prose glitters. She has a gift for aphorism, the observation that astonishes. She is less successful at imagining the shape of a life. As the story unfolds, Joan’s depravity has a numbing effect, and the unremitting degeneracy of the male characters begins to seem didactic. The intention seems less to shine a light on human nature than to cast it in funhouse shapes … Taddeo is writing with all her stars out, though they shone a little brighter when life itself supplied the plot.”

1. Diary of a Young Naturalist by Dara McAnulty
(Milkweed)

“… a remarkable book, the most moving memoir I have read in years. Now 17, Dara wrote it when he was 14, and his knowledge at such a young age amazed me—not just his understanding of the natural world, which is immense, but of literature, of Irish history and legends, of music and politics. His writing is clear and honest, laced with analogies from nature … What drives this book is Dara’s fierce passion—for his family, for the out of doors, for sharing his knowledge and enthusiasm with others … And now as I walk through my neighborhood and look at the many glorious, tangled gardens planted for pollinators and bees, or the manicured lawns with signs warning of chemical weed killers, or the great-horned owl family that roosts in the pines, I try to look with Dara’s eyes and I see it all new.”

2. The Plague Year: America in the Time of COVID by Lawrence Wright
(Knopf)

“… lean-limbed, immersive … Chapter by stellar chapter, Wright charts COVID-19’s arc … Wright is at his commanding best, though, when he places the pandemic in historical context—his detours into the Black Plague and the 1918 Spanish flu are narrative marvels—and in his portraits of the players … He threads The Plague Year with delightful transatlantic calls to Gianna Pomata, a former Johns Hopkins professor now retired to her hometown of Bologna. Pomata has long studied the transformative impacts of pandemics on economies and social orders. She sees a silver lining in COVID-19, noting, with Italian brio and humor, that innovations evolve from global calamities. One could say the same about Wright’s arresting book, birthed by a plague year but rich with peerless reportage and incisive critique.”

3. All That She Carried: The Journey of Ashley’s Sack, a Black Family Keepsake by Tiya Miles
(Random House)

Read an excerpt from All That She Carried here

“… a remarkable book, striking a delicate balance between two seemingly incommensurate approaches: Miles’s fidelity to her archival material, as she coaxes out facts grounded in the evidence; and her conjectures about this singular object, as she uses what is known about other enslaved women’s lives to suppose what could have been.”

“What is revealed in these letters is both the immense strength Emezi has nurtured in order to sustain a belief in who they are despite the destructive noise of the world, as well as Emezi’s own brave and poignant vulnerability in charting this journey … Written in imagistic language that is both poetic and crystalline, Dear Senthuran is an honest and lyrical accounting of a boundless mind exploring the wide expanse of creativity and experience. Authentic and vulnerable, the writing winds through the depths of wrenching wounds, but also explores the beauty in not pretending to be less that one truly is.”

=4. Forget the Alamo: The Rise and Fall of an American Myth by Bryan Burrough, Chris Tomlinson, and Jason Stanford
(Penguin)

“… zesty … Setting out to distinguish ascertainable fact from Texas tub-thumping, Burrough, Tomlinson, and Stanford, all Texans, succeed brilliantly in their intent … evenhanded … Despite a bit too much chattiness and some unnecessary vulgarity, this lively book is sure to cause plenty of interesting conversations in Texas … An iconoclastic, romping, bull’s-eye volley at an enduring sacred cow—popular history at its most engaging and insightful.”