Adam Scovell on One of the Playwright’s Many Legacies

A Nobel laureate and the backbone of post-war British theater, Harold Pinter was responsible for some of the most important shifts in drama of the last century. Yet, if his plays disappeared tomorrow, his name would still be dramatically important because his work was never solely confined to the stage. As his catalogue of work makes plain, Pinter loved cinema.

The writer’s earliest plays coincided with an artistic storm in Britain. New playwrights found space on television’s growing array of drama anthologies. The crossover between British theater and television in the 20th century became a great creative boon. Pinter, being an admirer of screen drama, took such opportunities with aplomb. It came as no surprise that, between his debut play The Birthday Party (1958) and his success with The Caretaker (1960), screen opportunities quickly arose.

Pinter soon jumped to big screen adaptations, his first being an effective collaboration with Clive Donner bringing The Caretaker to cinemas in 1963. At the same time, Pinter started to adapt other writers’ work, his first being Robin Maugham’s The Servant (1948). The Servant (1963) began several collaborations with exiled American director Joseph Losey, setting the benchmark for intelligent literary adaptations even then. As Pinter’s work progressed on screen, his experimentation gained confidence.

In hindsight, his most daring and influential work came in adapting period dramas. By the 1970s, Pinter was already redefining period drama with the addition of defiant non-linear storytelling. It was in his final collaboration with Losey in 1971, adapting The Go-Between (1953) by L.P. Hartley, that his work found a new temporal voice. Time would dominate his writing for the foreseeable future, and, a decade later, resulted in his widely admired take on John Fowles’s The French Lieutenant’s Woman (1969) with Karel Reisz.

With The Go-Between celebrating its 50th anniversary this year and The French Lieutenant’s Woman celebrating its 40th, it’s clear today that both films had a powerful influence on British literary adaptations. The past for Pinter was something not to naively cherish, but to regain in earnest. Rather than excavate, he looked to fragment. Time was his to remold. Memory splintered.

“The past is a foreign country, they do things differently there.” Few novels open with such a succinct summation of their purpose as Hartley’s The Go-Between. Already, the division between the yellowing daydream of the past and the melancholy of the cold present is inescapable for the reader and the main character Leo. Following Leo’s recollection of the summer of 1900 and his stay at Brandham Hall, the narrative is one in which the past is a nostalgic yet troubling place. Recalling the awkward position he was put in by the daughter of the aristocratic household, Marian, he tells of his role as messenger boy in her affair with farmer Ted Burgess.

The novel has elements that naturally interest Pinter; communication or lack of, affairs and their concealment, dialogue infused with ulterior meaning. For a writer so well known for his pauses in communication, the go-between itself is a concept that fits perfectly into Pinter’s creative intention. Leo is almost a personification of the Pinter pause, that clichéd embodiment of his dialogue in which silence became crucially measured. As Leo (Dominic Guard) passes secret, lustful messages between Marian (Julie Christie) and Ted (Alan Bates), he becomes a human example of Pinter’s grammatical trait.

The Go-Between showcases Pinter’s growing experimentation with time. He broached its potential as a structural device earlier in adapting Nicholas Mosley’s Accident (1965) with Losey in 1967, and Penelope Mortimer’s The Pumpkin Eater (1962) with Jack Clayton in 1964. It feels a less adventurous inclusion considering their narratives’ modern settings and mores. The Go-Between provided subtler possibilities, despite the vast qualities of those earlier films.

Enraptured by the novel and unable to put it down, Pinter completed the script in 1969. Several notable changes took place. The first was to shift the emphasis from class to the emotional revelations on first encountering human sexuality. The chief change from page to screen, however, is in the relationship between past and present. In Hartley’s novel, the modern day manifests almost uniquely in the book’s prologue and epilogue. The older Leo finds paraphernalia that elicits his Proustian reminiscence. Subsequently, his reunion with Marian decades later concludes the book.

Though opening with the same modernity, the film becomes a cut-up of Hartley’s novel. The epilogue is spliced throughout. It’s an intriguing move, adding a sense of inevitability to Marian and Ted’s doomed affair. Their future is one of rain and loneliness. Hartley’s ending is edited abruptly too, with Leo’s choice to deliver Marian’s final message to her grandson denied the novel’s firmer confirmation. The formal experiments feel loose compared to, say, those seen in Pinter’s later play Betrayal (1978) and its screen adaptation in 1983. Yet, certainly, they germinated at Brandham Hall.

“I am fascinated by the concept of time,” Pinter suggested in an interview with Michel Ciment, “and by the power the cinema has to suddenly reveal the meaning of a whole life from the age of twelve to sixty.” This may have been what initially drew him to adapting The Go-Between but it doesn’t explain his changes to its temporal flow. The dialectic between time and memory became so intertwined in the film, and his subsequent screenplays, that it arguably had a greater influence over his writing than almost anything else besides politics. And cricket, perhaps.

After The Go-Between, Pinter worked on another telling project conceived again for Losey. With the success of their third collaboration, Pinter adapted Marcel Proust’s In Search of Lost Time. It feels an ambitious yet logical progression from The Go-Between. The project was too large in scope, in spite of Losey calling it “the best screenplay I’ve ever seen or known of.” It never left the page and it wasn’t until the 1980s when Pinter again implemented on screen the temporal effects explored in The Go-Between.

“I am fascinated by the concept of time, and by the power the cinema has to suddenly reveal the meaning of a whole life from the age of twelve to sixty.”

“What I find exciting about the subject is the role of time,” Pinter told John Russell Taylor, “the annihilation of time by the man’s return to the scene of his childhood experience.” This is widely quoted when discussing Pinter’s take on Hartley’s novel. He saw emotional destruction as the by-product of cinema’s shrinkage of time. It sets the tone for the playwright’s future adaptations. Pinter’s time corrodes rather than heals.

John Fowles’s The French Lieutenant’s Woman would present a challenge to any screenwriter. A deeply 19th-century tale of love affairs and pre-Raphaelite atmospheres, the inescapably anachronistic perspective of Fowles’s own epoch frames the story. Its prose tells of another doomed love affair, relying on everything from descriptive references to Henry Moore’s sculptures to its famous attempt at combining two distinctive endings. It was unsurprising that Fowles struggled to see his story put on screen.

The project was first earmarked by director Fred Zinnemann, still riding the success of another British period adaptation, Robert Bolt’s A Man for all Seasons (1966). The script was initially reworked by noted screenwriter Dennis Potter, but the project floundered. Its challenge was somewhat unusual: how to maintain the duality of Fowles’s narrative without simply resorting to voice-over? Certainly, a narrative that skillfully suggests two different endings would strain most cinematic tricks. It wasn’t long before Pinter was approached and, seeing the novel as a technical challenge, started to work on the problem with Karel Reisz.

In a conversation with Mel Gussow, Pinter set out the conundrum. “The problems involved in transposing it to film are quite considerable,” he suggested. “It pretends to be a Victorian novel, but it isn’t. It’s a modern novel, and it’s made clear by the author that he’s writing it now.” The method used to solve this was a natural evolution from The Go-Between. The writer split the temporal aspects of the story into an interconnected pair, following the Victorian narrative of Sarah (Meryl Streep) and her affair with paleontologist Charles (Jeremy Irons) on the one hand, and on the other following the filming of Sarah’s story in the modern day, with Sarah being played by Anna (Streep) and Charles played by Mike (Irons).

The actors’ affair mimics the fictional one they film. Mike conflates his feelings with those of his fictional character. The two love stories cross when necessary and differ when the change in period arises. The structure also innovatively allows the double ending of the book to be played out in full. Mike even comments on how the book they’re adapting has both “a happy ending and a sad ending.” He is unfortunately stuck with the latter.

The film cleverly couples the period scenes with their modern rehearsal and filming. If the success of the Victorian romance is in spite of the circumstances of their society (honor-bound, confused, sexually ashamed), then the failure of the modern romance occurs in spite of the new freedoms. Sarah and Anna both share a radical spirit, the former continuing the relationship on her own terms, the latter choosing to leave in spite of Mike’s desperation to give up everything for her. Hindsight cannot save Mike’s feelings.

“I don’t just transcribe the novel; otherwise you might as well do the novel.” This was Pinter’s assessment of adapting The French Lieutenant’s Woman. He knew it was a huge achievement, even before the award nominations started to arrive. His radical scripts, from his own plays to adaptations of novels like Hartley’s and Fowles’s, put pay to the idea of note-for-note retelling being the only way to put novels on screen. The legacy can be seen everywhere today, from most BBC period adaptations to the immediate successors in British cinema, namely Merchant Ivory’s literary dramas.

Augmenting literature for the screen is something most filmmakers understand as necessary, in spite of still-regular cries from the literary world fearing the sanctity of the novel to be sullied. With Pinter’s unparalleled successes, it became an inevitable tool in doing novels justice. A different form required change in order to avoid mere transcription. Time in these adaptations may have been fragmented, annihilating even, but it was also emotionally regained.

Adam Scovell is a writer and filmmaker from Merseyside now based in London. He completed his PhD in Music at Goldsmiths in 2018. He has written for the BFI, The Times, Financial Times, Little White Lies, and the BBC as well as for many other outlets. He has collaborated with the writer Robert Macfarlane on several films, including adaptations of Holloway (2015) and Ness (2019). In 2017, his first book Folk Horror: Hours Dreadful and Things Strange was published by Auteur and University of Columbia Press. In 2019, his first novel Mothlight was published by Influx Press in 2019. His latest novel, How Pale The Winter Has Made Us, was published in 2020 by Influx Press. 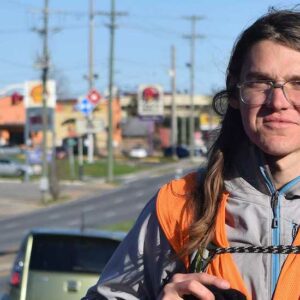 Yesterday, I took a photograph of abandoned plastic sleds in Prospect Park, Brooklyn. The photograph’s blue shadows match...
© LitHub
Back to top