TODAY: In 1866 , in Jules Verne’s Twenty Thousand Years Under the Sea, the steamer Governor Higginson encounters a mysterious sea creature five miles off the coast of Australia.

Colson Whitehead on writer’s block, John Carpenter, and Inner Space exploration • 40 writer’s writers readers should read • Maris Kreizman talks to John Waters about taking LSD at 70, Clarence Thomas, and reading bad reviews • What Hemingway cut from For Whom the Bell Tolls • Richard Russo on the power of regret • A primer on tasting chocolate like a professional (seriously) • Leni Zumas on The Judas Rose • When bad presidents misbehave do they always get away with it? • Sarah Parcak on how space technology is revolutionizing archaeology • Kevin Alexander recommends six funny, unflinching, and unsparing cooking memoirs • Emily Guendelsberger on the high human cost of low-wage work at an Amazon warehouse • Read a new poem by Margaret Atwood • Jon Gertner on the disappearing ice sheet of Kangerlussuaq, Greenland • On the fine (and difficult) art of science writing • How contemporary poetry treats the old myths of the American railroad •

Mukoma Wa Ngugi on the poem that made him fall in love with words • CJ Hauser has some pretty convincing evidence that her niece is the reincarnation of Shirley Jackson • How does a lobster wind up with the Pepsi logo “tattooed” on its shell? • 11 literary parties we’re sad to have missed • In honor of the 50th anniversary of the moon landing, some lunar perspectives: What if we had gotten stuck up there? • A poet and a novelist discuss the literary allure of outer space • Gaze upon some heroic (and very good) space dogs • On Gemini, the human spaceflight program that made Apollo possible

Interested in Colson Whitehead's new novel? You're not alone. 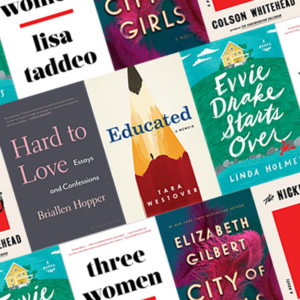 Interested in Colson Whitehead's new novel? You're not alone.

Hello from Book Marks, Lit Hub’s “rotten tomatoes for books!” How It Works: Every day, our staff scours the most...
© LitHub
Back to top
Loading Comments...