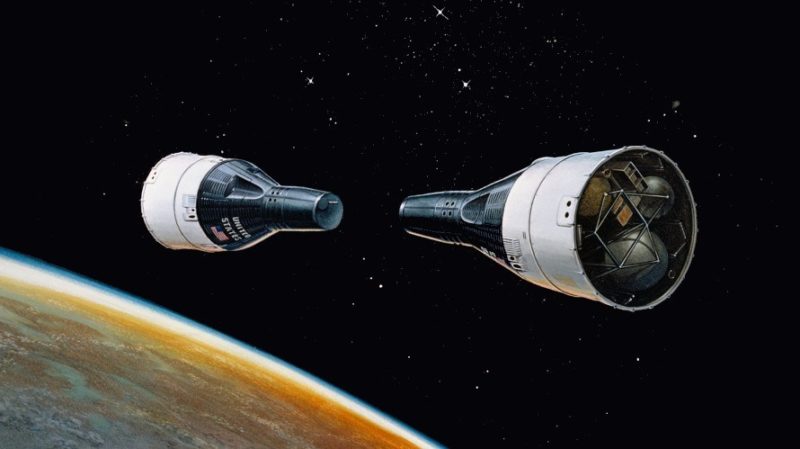 Gemini: Fine-Tuning the Techniques to Send People to the Moon

The Walk, and a Sky Gone Berserk

We try and plan for the unknowns. It’s the unknown unknowns that you have concerns about.

If there had been a space equivalent of Car and Driver magazine, its editors would have voted Gemini the Spacecraft of the Year.

By the time the spacecraft was man-rated and ready to fly two astronauts, its total cost had ballooned to $1.35 billion, almost double its original budget of $700 million. But Gus Grissom had done his job well. It was a pilot’s dream in every way that counted. And he had gotten his wish, thanks to Al Shepard’s inner-ear problem—he would command the first Gemini mission. To prepare, he and his shipmate John Young, one of the New Nine astronauts, had spent many hours in the Gemini simulators, precise duplicates of the capsule’s cabin in which a crew could approximate a complete mission, from liftoff to touchdown. Included were realistic visuals outside the windows and tilting and vibration that faithfully simulated the feel of launch and reentry. Nominal missions were flown at first, with various failure and abort situations added later.

At 4:40 a.m. on March 23, 1965, Deke Slayton knocked on the bedroom door of the crew quarters of Hangar S to wake up Gus Grissom and John Young. Slayton had first done this for Gordon Cooper on the final Mercury mission. He would do it for 24

flights altogether. He had also begun choosing the crew for each flight, subject to the approval of Bob Gilruth and a few senior NASA officials, though Slayton would be overruled only once.

Over the next 20 months, from March 1965 to November 1966, 16 Americans would roar into space on ten different missions, roughly one every two months. Gemini’s crews would comprise three of the Mercury Seven, every remaining member of the New Nine, and five astronauts from the 1963 selection. Each flight would incrementally increase the knowledge and experience needed to reach the ultimate goal of a man on the moon. Each would face its share of problems, some minor, some major. None would endanger the lives of its crew except one.

Two unmanned Gemini missions preceded Gemini 3, though, because of the piloting required in the new spacecraft, there were no more flights for the astrochimps. They had done their duty, and most of them were eased into retirement at various zoos to live long and happy lives.

On March 23, 1965, Gemini 3 blasted into space from Cape Kennedy’s launch complex 19, as would every Gemini mission, to begin a three-orbit shakedown cruise. Grissom had tried naming the craft Molly Brown, after the popular Broadway musical The Unsinkable Molly Brown, a dig at the criticism of his Mercury flight. (Grissom had a sense of humor; his first name choice was Titanic.) NASA management was unamused, but allowed the name to stick. It would be the only Gemini spacecraft to have a name beyond the flight designation.

In the launch control center several hundred yards away—a blockhouse similar to its predecessors but even better fortified—was Wernher von Braun. It was his 53rd birthday. His Marshall team had nothing to do with the Gemini program, and he and his center were busy enough; though costs and problems were rising on his Saturns and their F-1 engines, several test Saturns had been launched into orbit successfully. He was already worrying about Marshall’s post-Apollo fate, since there were no plans for more large boosters. But he wanted to see for himself the launch of a spacecraft capable of maneuvering and changing orbit.

The mission had two main goals. One would end up being a perplexing failure, the other a smashing success.

Grissom’s flight went as smoothly as expected. “Grissom Maneuvers the Gemini” ran the large headline on the front page of the New York Times the next day, emphasizing the superior piloting control available on the spacecraft. Grissom raved about its maneuverability and handling; unlike Mercury, Gemini had powerful thrusters that allowed it to change orbit and effectively go where its pilot wanted, short of leaving the Earth’s gravity (which would require a larger rocket engine). Every astronaut who flew it agreed with Grissom. Passengers no more, they were finally flying in space.

An EVA had been planned for a later Gemini flight, but after Alexei Leonov’s space walk five days before Gemini 3—a mission clearly timed to preempt Grissom’s—NASA officials decided to move it up. Ed White, a world-class athlete who had barely missed qualifying for the 1952 Olympic track team, seemed a perfect choice for an activity that might be strenuous. In the weeks leading up to Gemini 4, some newspaper articles suggested the EVA might have been advanced to match the Soviets. Flight director Chris Kraft took offense when asked about it in one interview: “We’re not playing Mickey Mouse with this thing,” he replied testily. “I don’t think it’s very fair to suggest we’re carrying out a propaganda stunt.” But on a wall in the MOCR at the Manned Spacecraft Center was a neatly lettered poster that belied Kraft’s denial: we are 301 man-orbits and 443 man-hours behind the Russians in space flight time.

For the first time, Kraft would lead his ground team from Houston. The MOCR would handle all future manned missions, taking

control as soon as the rocket cleared the launch tower. The new Mission Operations Control Room in Building 30 (there were two MOCRs, actually, one on the second floor, used for simulations and practice runs, and one on the third, used for all the Gemini and Apollo Saturn V missions) was larger and more up-to-date and would host not one or two but three shifts of flight controllers for around-the-clock operations. Gene Kranz would oversee one shift; he named his team White, in contrast to Kraft’s Red team. John Hodge, the pipe-smoking engineer whose gray hair and British accent gave him a distinguished air, would handle the third shift, Blue. (Each flight director picked his team’s color; when a flight director left, that color was retired.) He had been Kraft’s assistant for a while but was promoted to flight director when it became clear that the last Mercury mission, Gordon Cooper’s daylong Faith 7 flight, would require a third shift. And the tracking network had been increased to some 20-odd stations around the world to improve communication. Data radioed from the spacecraft was received at NASA’s Goddard Center near Washington, DC, digested, and then sent to Mission Control in Houston.

On June 3, 1965, ten weeks after Grissom’s flight, astronauts Jim McDivitt and Ed White, El Lago neighbors and good friends since their time together studying aeronautical engineering at the University of Missouri, orbited the Earth for four days in Gemini 4. The mission had two main goals. One would end up being a perplexing failure, the other a smashing success.

A hundred miles above the Earth, he went drifting out into the void of space connected to the craft by a 25-foot, gold-tape-wrapped umbilical cord supplying his oxygen.

A spacecraft had never tried to rendezvous with, or even approach closely, an object in a different orbital path. But rendezvous and docking would be required for a lunar landing using LOR, the chosen method. Command pilot McDivitt tried to maneuver his Gemini close to the spent upper stage of its Titan II booster, but as he pointed the nose of his craft toward the target and activated his thruster jets to close the distance, a curious thing happened—the booster moved away and downward. A few minutes later, he tried again, once more with no luck. After a few more attempts, Kraft finally told him to quit trying. Without an onboard rendezvous radar, planned for later Gemini missions, rendezvous would have to wait.

What this revealed was the complexity of orbital mechanics, which on the most basic level worked exactly the opposite of how it did with aircraft. Adding speed while in orbit raises a ship to a higher orbital path, where it will paradoxically slow down, since the craft’s orbital speed is a direct function of its distance from the center of gravity of the object it’s circling—in this case, Earth. The ship’s target will now be traversing a lower, and shorter, orbit, and will consequently move faster around the Earth. To  catch up to a target ahead of it or in a higher orbit, the ship needs to reduce its speed and drop into a lower orbit. At the correct moment, a burst of speed will lift the craft close enough to the target’s orbit to eliminate all relative motion between them, at which point these paradoxical effects virtually disappear, and station-keeping, or flying in formation in space, is achieved. Only then can docking be attempted. McDivitt’s failure was a lesson learned, and much of the subsequent Gemini missions would involve perfecting orbital mechanics and rendezvous maneuvers.

The second goal, however, was achieved. A few hours after the failed rendezvous, the cabin was depressurized, and after some difficulty, White’s hatch was opened. A hundred miles above the Earth, he went drifting out into the void of space connected to the craft by a 25-foot, gold-tape-wrapped umbilical cord supplying his oxygen. For 20 minutes, he floated around the capsule, maneuvering with bursts of compressed air from a small zip gun and shooting photos with a Hasselblad on his chest. McDivitt also had a camera, and his vivid images of his cavorting crewmate, the arc of the Earth and its clouds, continents, and oceans behind him, be

came iconic. Each man had decided to have an American flag patch sewn onto the left shoulder of his spacesuit, and every subsequent astronaut would wear the Stars and Stripes there.

White enjoyed himself so much that he needed a bit of coaxing to return to the craft. When he finally pulled himself into the cabin, he stood on his seat, drinking in the view. “This is the saddest moment of my life,” he said. He needed McDivitt’s help to close the hatch, and by the time he was securely fastened in his seat, he was exhausted. But his performance impressed his superiors; a few weeks later, he would be named backup commander for Gemini 7, and soon after that, he’d be assigned to the crew of the first Apollo flight. McDivitt was also rewarded; he was given command of another early Apollo mission. 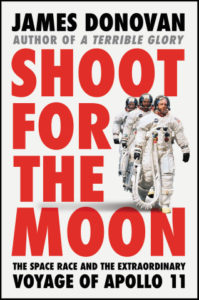 Excerpted from Shoot for the Moon: The Space Race and the Extraordinary Voyage of Apollo 11. Copyright © 2019 by James Donovan. Reprinted with permission of Little, Brown and Company. All rights reserved.

James Donovan is the author of the bestselling books The Blood of Heroes: The 13-Day Struggle for the Alamo–and the Sacrifice That Forged a Nation and A Terrible Glory: Custer and the Little Bighorn-the Last Great Battle of the American West. He lives in Dallas, Texas.

Writing Through Extreme Grief Helped Me Become Myself Again 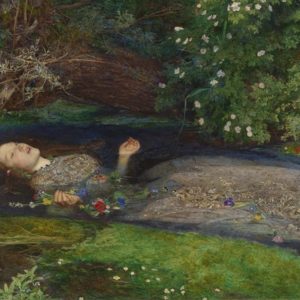 Writing Through Extreme Grief Helped Me Become Myself Again

The cover of my first book, Late Migrations, features a leaf-filled silhouette of a little girl’s face. My face. The original...
© LitHub
Back to top
Loading Comments...