Zach Powers: Why do you think there’s this subset of writers who are so fascinated by the cosmos, and not necessarily writers working specifically in science fiction? Where does the cosmic overlap with the literary for you?

Gale Marie Thompson: Last night I went with another writer out to Dead Horse Point, a Dark Sky Park near Moab, Utah. We sat for hours, looking out over canyons as the stars poured out in front of us. By midnight there were so many stars that at points the sky looked more white than dark. We saw satellites, meteors, and even Jupiter in its fuzziness. Bats came out and circled overhead, blocking out stars as they went. It was thrilling—and terrifying. I remembered how the definition of awe includes not just wonder, but that primordial sense of fear and dread. A feeling so deep in the body that we feel its only connection is back out into the cosmos.

I think it’s the job of a writer (or poet!) to come up against the ineffable, time and time again. We compulsively work to make meaning out of something that can never completely have meaning, to put words to things that can’t be verbalized. Space is full of things that we know exist, some of which we can see from far away, but we can’t touch them or actually be in their presence. We can see and feel the immensity of space when we look up at night, but infinity lies beyond what little we see. Humans—writers—attach so much meaning to these unknown bodies. They are charged, like talismans, with our emotions, our struggles, our relationships. What exactly that meaning is, we’re often not sure, but with it comes magic. Humans are really good at projecting onto things. I feel like I should quote Jodie Foster’s character in Contact here: “No words…they should have sent a poet!”

When I was little, I had a series of dreams where I would be falling through open space. Every now and then a huge planet would pass by, lit up like a lamp. Each planet was always so bright, and it gave me a feeling that I didn’t understand: of being small and large at the same time. Toward the end I would accidentally trip on a cord and “unplug” all of the planets and stars. Suddenly, the entire universe became black as pitch. Just as I realized that I was alone, vastly and openly alone, I would wake up. This was around the time I remember reading in an old Childcraft book that the sun was getting bigger and would one day consume the Earth. But of course, the book reassures me, I don’t need to worry, because this won’t be happening anywhere near my lifetime! Cue a child’s first existential crisis.

The loneliness of planets, and that contradiction of scale—of feeling infinitely large and small, permanent and impermanent, at the same time—adds to the mystery of who we are, how we connect with others, and what we hope for the future. And the best sci-fi is the kind that takes space on more literally but also builds on this imaginary that space imagery offers us!

Why do you think writers are so drawn to space as a source of inspiration? When did you realize that writing and outer space connected for you?

ZP: I was never going to be an astrophysicist. The fascination I felt with cosmic discovery never paired with a desire to do the math behind the science. Instead, I wonder at the scope of the universe, the god-destroying scale of existence. Because, cosmically speaking, we’re small enough to not exist in the same way we pretend our skin doesn’t teem with wriggly motes. If the universe had a brain, it would shudder at the image of us under a microscope. I can’t believe that those are on me.

To be fascinated by space is to be fascinated by insignificance. But that’s the fun of life (and of writing): making meaning where none ought to exist. When I look up at the moon and remember that Neil Armstrong left footprints there—and I always remember Neil Armstrong when I see the moon—how can I but marvel at the sheer audacity of us as specks? We are the dust that refused to settle. Breeze or not.

If the universe had a brain, it would shudder at the image of us under a microscope. I can’t believe that those are on me.

Space is practical knowledge and space is poetry and space is, like you said, feeling simultaneously small and boundless with potential. Why do I think so much about space? Why do I sometimes turn to it when I write? Because I want every possible way of saying holy shit about the subject. We are small and space is huge and ain’t that a fuckin’ thing.

There’s a Calvin and Hobbes comic strip I’ve loved since I was a kid. All four panels feature Calvin standing outside at night, looking up at the stars. In the second panel he shouts, “I’M SIGNIFICANT.” In panel four, he mutters his own dialogue tag, “Screamed the dust speck.” I find humanity most beautiful when we’re faced with the realization of our place in the universe but still manage to get out of bed in the morning. Resilient specks, we are.

Have you specifically tackled space in any of your work?

GMT: Yes! The first poem in my book, Soldier On, includes the line “welcome, orbit,” and other poems have titles like “Earth in Space” and “Questions of Comets.” One poem, “Pulsar,” builds on the relentless pattern of energy pulses that emits from a pulsar. It connects these lonely, consistent pulses to making plans for the future, the passage of time, and how we are only physical beings for a futilely short time. There’s something so lonely, but so doggedly hopeful about the gestures we make to each other for the sake of feeling connected.

I just finished writing a book called Dummy Prayer, that builds on this idea of the gestures we make to communicate and connect with each other. Both space and polar exploration play a huge role in this book—the epigraph is a quote from Apollo astronaut Gus Grissom, spoken right before the Apollo I disaster: “How are we going to get to the moon if we can’t talk between three buildings?”

Other poem titles in this book include: “The Milky Way is a Snowy White,” “Emanations” (where the “you” leaves via a “push through the heliopause”), “Lageos Satellite” (a Carl Sagan creation), “Solar Divide,” and so on. Again, I’m just fascinated by those lonely, but consistent pulses we emit to call out to each other. The inevitable divisions between us and those we love. The feeling of being alone in the world, and yet having to keep moving (Beckett’s “I can’t go on I’ll go on”) and building relationships. I promise it’s not as depressing as it sounds!

There’s something so lonely, but so doggedly hopeful about the gestures we make to each other for the sake of feeling connected.

You and I share not only a fascination with outer space but with the history of space exploration as well. Your upcoming book imagines the Soviet program, while mine has an epigraph from a failed Apollo mission (wait, are we re-enacting the Cold War? A question for another time). What is it about these early missions and failures of space exploration that resonates so deeply with you?

ZP: In researching my novel, I came across a fact I’d never realized before. If Earth’s mass were just a little bit bigger, gravity would be too great for chemical rockets to overcome. We live on a planet peculiarly suited to spaceflight. What about all those super-Earths we’ve discovered in other solar systems? Even if a super-Earth supports intelligent life, they’ll never have spaceships like we do. No chemical combination burns with enough control and enough force to escape those planets’ surfaces.

The other thing I learned was the precariousness of every single launch. The complexity of these machines and the scale of the power being harnessed means that a hairsbreadth deviation leads to an explosion instead of a liftoff. Yuri Gagrin, the first cosmonaut to ride a rocket into orbit, only survived because of luck. Vostok I’s service module was supposed to jettison, but it remained tethered by wires, sending the whole capsule into violent gyrations. Gagarin was seconds away from bursting into flame, turning into a shooting star, but the wires melted away just in time.

Last summer, Mars was particularly bright in the sky, and more than once I spoke to it, “You’re next, motherfucker.” What’s more human than seeing a dot in the sky and deciding to go there? What’s more human than the dream of shrinking vast distances? I feel we’re in an era of human grotesquerie, and maybe that’s the only era there’s ever been, but I find us lovely when we strive.

Gale Marie Thompson is the author of ​Soldier On​ (Tupelo Press 2015) and Helen or My Hunger​ (YesYes Books 2020). Her work has appeared in ​Crazyhorse, American Poetry Review, BOAAT, Tin House Online, and Guernica​, among others. Gale is the founding editor of Jellyfish Magazine, and in August she will be moving to the mountains of North Georgia, where she will begin directing the creative writing program at Young Harris College.

Zach Powers is the author of the novel First Cosmic Velocity (Putnam, August 2019) and the story collection Gravity Changes (BOA Editions, 2017). His work has been featured by American Short Fiction, Tin House, and elsewhere. He is Director of Communications at The Writer’s Center in Bethesda, Maryland, and teaches writing at Northern Virginia Community College. Get to know him at ZachPowers.com.

What If We Got Stuck on the Moon? 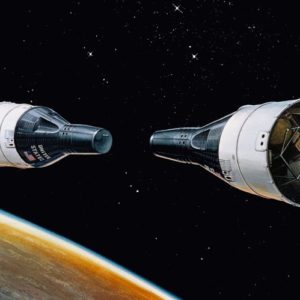 The Walk, and a Sky Gone Berserk We try and plan for the unknowns. It’s the unknown unknowns that you have concerns about. –Bob...
© LitHub
Back to top