A Laid-Off Journalist Takes a Job in an Amazon Warehouse

Emily Guendelsberger on the High Human Cost of Low-Wage Work

It’s 6:45 am, and I groan—actually groan out loud—as I log in to my scanner and find myself assigned to the fourth floor. Again.

Nobody likes the fourth floor. Sometimes, when pickers log in and draw an assignment on four, they’ll log out and back in again, rerolling the dice until they get any other floor. My suspicions about my probability-defying number of fourth-floor assignments were confirmed when we all got scolded for rerolling at standup a couple of days ago.

Here are some of the many reasons to hate the fourth floor:

• Stairs. All the bathrooms and break rooms are on the ground floor, and three flights of stairs is no joke when your body hurts this much—plus, it adds to your Time Off Task.

• Metrics. Four is where they store oversize items—puffy winter coats, enormous Michael Kors bags, improbably large Carhartt overalls. The drawers up there are double-wide, so the distance between picks is twice as long—at least, it definitely feels that way. Your rate also gets kneecapped by all the extra trips to the conveyor belt and back, because a single fuzzy bathrobe or puffer coat can fill a bin to the brim. I almost never make rate on the fourth floor. The rate is 90 per hour (or whatever it is today—it’s always changing), whether we’re picking small miscellany from the tiny yellow TEK0 cubbies on the ground floor, where, bored, I clocked 140 one day seeing how fast I could go, or big stuff up on four, where I average between 50 and 60.

• Heat rises. It’s not so bad in December, but the fourth floor is the only place in SDF8 where I get sweaty. I can’t imagine what it must be like up here in the summer.

• It’s dark, lonely, and kind of creepy. Since the whole grid is bigger up here, pickers are even more widely spaced out than usual. You don’t realize it on the lower floors, but the mod’s fluorescent lights turn off after five minutes or so if they don’t sense motion nearby. There’s so few people on the fourth floor that each picker basically blazes a light trail into the darkness as she walks. From above, it must look like that Snake game on early Nokia cell phones.

But there’s one upside to the motion-sensor lights—they make it clear when there’s nobody within earshot and I can sing at full volume. This is no small thing, because I’m starting to lose my mind with boredom.

My body is grudgingly adjusting to the job, but my brain isn’t. I’ve started dreading the monotony even more than the pain. There is literally nothing to do out in the mod but pick. I’m desperate for an audiobook, music, a conversation—anything to do with my brain while my body picks.

It’s hard to communicate how big a deal the boredom is—it’s much easier to write about pain. But I’d never considered quitting because of the pain. The long days of lonely monotony bring me close to walking out more than once.

I get desperate. I pose myself still more hypothetical questions that should take a while to consider, like “What’s the most specific human emotion that would still be recognizable in all cultures?” I assemble extremely specific playlists in my head. I play car games with myself.

But anything that requires prolonged thought or attention is hard to keep up, I find. Something about picking uses that same part of my brain. The only thing I can do without losing the thread of one or the other is sing. So I sing until I’m hoarse, every day. I have literally taken to memorizing new songs so my repertoire has more variety.

Honestly, though, I’ve stopped caring who overhears me, which nullifies the only benefit of the fourth floor. I consider rerolling to see if I can get a different assignment, but . . . whatever. I should embrace the Christmas spirit and let the people gunning for that blue badge, like Blair, have the assignments that’ll help their metrics.

As we head out into the mod after standup, I find myself climbing stairs next to the blue velvet harem pants guy. I keep meaning to talk to him, and not just because of the pants—whenever I see him, he’s always walking super fast, just like Blair, and always seems to be in a great mood.

“I like your pants,” I say. He says thanks, they’re his favorite, and introduces himself as Eli.

“Hey—whenever I see you out there, you look like you’re having a good time. Can I ask what you do to keep yourself from going nuts?” I ask.

The crowd on the stairs thins out as we climb past the second floor.

“Đồng,” he repeats, smiling. “It’s the currency in Vietnam.” He’ll be traveling around Vietnam, Thailand, and Laos for five months after peak. “I like to convert the wages into the currency there. Like—I’ve made three million đồng today!”

“Hey,” I say, making a spur-of-the-moment decision. “This is weird, but I’m actually a reporter working here for this book I’m writing—can I maybe talk to you after work sometime?”

“For sure!” says Eli. He’s here as a workamper, someone who travels the country doing seasonal jobs, so he’s down at the RV park across the street from where we had orientation, with the rest of the workampers.

Eli’s in his early forties, much younger than the average workamper. Most are retirees who, for whatever reason, sold the house and bought an RV but can’t actually retire-retire. So they drive around the country following a nomadic circuit of seasonal work—the previous stop for many of them was the late September sugar beet harvest in Minnesota and North Dakota. Amazon’s CamperForce program specifically recruits workampers for peak at some sites, including SDF8, and pays for their campsite rental as an incentive.

Eli says he came to work peak with a bunch of friends, and in the evenings they usually hang out around the campfire down at the RV park. He invites me to stop by sometime. They’ll be easy to find—they’re the ones without RVs. I say I’ll bring a sixer as Eli turns off at the third floor, waving. The ones without RVs? 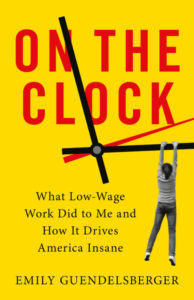 Excerpted from On the Clock: What Low-Wage Work Did to Me and How It Drives America Insane. Copyright © 2019 by Emily Guendelsberger. Used with permission of Little, Brown and Company, New York. All rights reserved.

Brazil's History Is Ahead of It, Not Behind 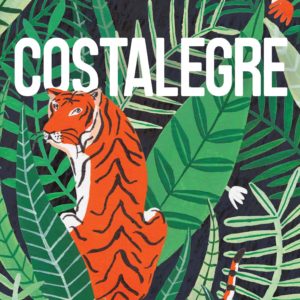 Domingo I find myself thinking a lot about my dear Elisabeth. What else am I to do? Of course, I think a lot about my brother,...
© LitHub
Back to top
Loading Comments...