TODAY: In 1967, S.E. Hinton’s The Outsiders is published by Viking.

Will Self: Why do we read, anyway? • Check out a 1964 collaboration between Frank O’Hara and Italian painter Mario Schifano • Isabel Wohl considers the possibilities and constraints of place in fiction • Alia Volz on growing up in a cannabis bakery • How a queer couple masterminded a Nazi resistance campaign • Khalisa Rae on what it means to write poetry in the “Southern tradition” • Martha Cooley considers cats (and cat deaths) in literature • Kyra Wilder on motherhood and madness in Victorian literature • Lynn Berger has some thoughts on raising a second child • Maryanne O’Hara reflects on turning to nonfiction after the death of her daughter • How a Catholic priest changed Einstein’s mind about the universe • Tyler Gillespie traces the rise and fall of the Florida Man meme • KT Sparks recommends literary characters who make graceless exits • How Lying George Carmack set off the Klondike Gold Rush • J. Robert Lennon on spending his pandemic year inside a video game • Drew Johnson recommends treating yourself to a Hot Balzac Summer • A photo essay on living in exile • Rereading The Phantom Tollbooth during pandemic doldrums • Madeleine Watts talks about coming of age amidst climate catastrophe • Emmanuel Mbolela on the plight of migrants • 19th-century socialites threw parties that would put Gatsby to shame • Audrey Clare Farley on the eugenicists who weaponized biology • Fatima Bhutto on channeling the fearlessness of Malcolm X • Kate Aronoff draws a line from the Green New Deal back to FDR’s New Deal • How the ICU influenced Paul Griner’s novel • Lilly Dancyger on the many costs of an Ivy League grad degree • Pike on the fine line between a signifier and a trope • Cassandra Lane on conception stories and the weight of memory • Throwing a rave in Chernobyl’s exclusion zone

To celebrate Earth Day, Olivia Rutigliano recommends 50 of the best new nonfiction books about the natural world • From climate change to car crash sex: a look back at five classic J. G. Ballard novels • “Here is the master technician once more at the top of his form”: a 1952 review of Ernest Hemingway’s The Old Man and the Sea • “He writes with impassioned control, out of a maniacal serenity”: Thomas Pynchon’s 1988 review of Love in the Time of Cholera • New titles by Richard Wright, Jenny Diski, and Anthony Bourdain all feature among the Best Reviewed Books of the Week

Crime and delves into noir in Italy’s capital of style • Mark Aldridge on Hercule Poirot’s first appearances on radio and television • April’s best debut crime and mystery fiction • Amy Suiter Clarke wants crime writers to reimagine public safety without police • From Hitchcock to heists, a host of new crime nonfiction out this April • Audrey Clare Farley on the sensational trial that uncovered a secret world of medical atrocities • Sabina Stent gives a close reading of The Thomas Crown Affair as a masterpiece of surrealism • Mindy McGinnis on resurrecting Edgar Allan Poe while continually disappointing her mother • Zhanna Slor with seven suspenseful novels that examine immigrant identity • A look at the nominations for the 2021 ITW Thriller Awards

The Last Garden in England by Julia Kelly, Read by a Full Cast 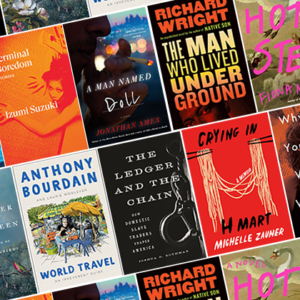 Richard Wright’s The Man Who Lived Underground, Jenny Diski’s Why Didn’t You Just Do What You Were Told?, Anthony...
© LitHub
Back to top