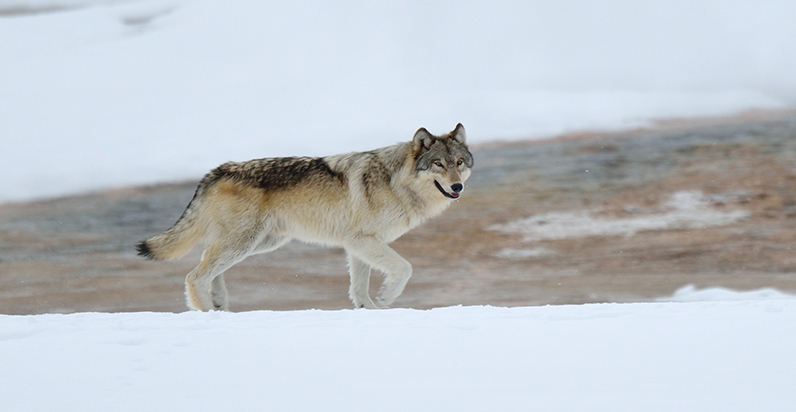 Tony Hiss on Pluie, the Lone Wolf, and Her Lessons on Landscape

On June 6, 1991, a mile up in the Canadian Rockies near Banff National Park, a drenching storm turned the fur of a gray wolf black. A poetic zoologist, who’d just captured this five-year-old female wolf to fit a radio transmitter around her neck, named her Pluie (“rain” in French) and then let her go. It seemed like routine research but was anything but. It was, as they’d discover, a profound glimpse into a larger geography where animals are the guides, scouts, surveyors, and mapmakers.

Pluie wore something unprecedented that now, in a world flooded with 3.5 billion smartphones capable of pinpointing people’s locations moment by moment, seems almost quaint. She was the first wolf, and one of the first mammals, to wear a collar whose pinging signal could be picked up by satellites flying 530 miles above the earth and then sent back to a receiver on the ground.

This was shortly before the Defense Department’s Global Positioning System (GPS) was made available for civilian use, as part of a peace dividend that later made smartphones possible. GPS—24 satellites 12,600 miles overhead, launched during the Cold War—kept track of American submarines and hostile missiles. More expensive but more accurate than earlier satellites, GPS made possible animal tracking based on a vastly tall, invisible isosceles triangle of signals and relays.

It was known that wolves wander. Packs roam, and individuals peel off, looking for food, a mate, or another pack. In a couple of years Pluie, considered a loner, might log 60 or 70 miles in back-and-forthing. For six months Pluie told her researchers exactly that: she moved a bit north and briefly joined a Banff wolf pack. Then came two surprises, as wildlife biologist Karsten Heuer, one of the trackers, recounts in his book, Walking the Big Wild.

The first came in late November, when transmissions stopped. Researchers checked all nearby roads and hiked ridge after ridge. No Pluie. Zoologists closed the books on her, figuring either the wolf or the battery must have died. A month later came the second and much bigger surprise, a real jolt. A civilian branch of NASA got in touch to say a satellite had picked up Pluie’s signal hundreds of miles to the southeast, down below the US border in Montana. Pluie hadn’t stopped broadcasting for a moment. The researchers hadn’t thought beyond their expectations and so weren’t looking nearly far enough away.

It was a profound glimpse into a larger geography where animals are the guides, scouts, surveyors, and mapmakers.

Over the next 18 months, before transmissions ceased once more, zoologists followed Pluie’s every move and with growing amazement. At one point during her Montana trek, she was walking through open prairie, east of Glacier National Park. She then turned west for hundreds of miles, went up and over the Rockies, skirted Glacier’s southern edge, crossed planted fields and busy highways, traversed rivers and lakeshores in the Idaho Panhandle, passed by Coeur d’Alene, a resort town Barbara Walters once called a little slice of heaven, and got all the way to Spokane, Washington, a city and surrounding suburbs with half a million people.

After that, Pluie changed direction again, doubling back through Idaho and Montana, and moving north returned to Canada through British Columbia. After another several hundred miles of travel, she was back in Banff. “We thought she was on a pickup truck for a while,” Paul Paquet, the lead researcher, told The New York Times, “she was moving so fast.”

Wolves are somewhat nearsighted, but in other ways their world is far more vivid than ours, as Wolf Country, a website, makes clear. They like to move at an eight-to-ten-mile-an-hour trot, a speed that increases to thirty-five miles an hour when chasing another animal. They can see at night, and because their sense of smell is about 100 times more sensitive than ours, they can pick up a scent a mile and three-quarters away. Within the Rocky Mountain forests, Pluie could hear sounds six miles away, while out on the open prairie she could detect sounds ten miles off in any direction.

In late 1993 Pluie went silent again. Her bullet-damaged transmitter turned up on a mountainside outside Banff, but we know she kept on roaming for two more years. Hunters killed her, her mate, and their three pups in 1995, 80 miles north of where her transmitter was found. But for a year and a half Pluie had been a kind of 24/7 radio station, an all-news-all-the-time bulletin from another species.

Pluie hadn’t stopped broadcasting; the researchers hadn’t thought beyond their expectations and so weren’t looking nearly far enough away.

Some inventions resonate, changing forever how we see the world and adding dimensions to our understanding of reality—though it can take time to sink in. In the early 17th century, Galileo’s telescope, after provoking convulsive arguments, convincingly established the hugeness of the universe. Microscopes, an innovation from the same period, opened the domain of the minuscule and two centuries later tightly linked human health to the existence of tiny living things with the rise of the germ theory of disease.

It took quite a mash-up of recent inventions—radios and satellites and software—to give Pluie a voice. More than a quarter century after she went off the air, conservationists and ecologists, landowners and developers, and vacationers and government officials are still coming to terms with her messages. Far from being static, opaque entities lurking in our peripheral vision, the landscapes around us are alive with purpose, drama, movement, a constant parallel presence that directly intersects with our lives. Landscapes are verbs, not nouns. The living world operates at an epic scale that dwarfs the traditional conservation thinking of the last 150 years.

To keep 90 percent of species alive, the 50 by ’50 goal, we have to know where and how these species are actually living their lives. Pluie’s irregular path, something between a squashed circle and a lumpy triangle, encompassed a 40-thousand-square-mile territory not indicated on any map because it ignored political and geographic boundaries. She was a transnational wolf, crossing parts of three US states and two Canadian provinces as she made her way around an area ten times that of Yellowstone. Because places stay put but animals don’t. 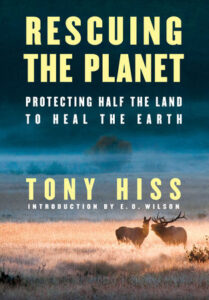 Rescuing the Planet: Protecting Half the Land to Heal the Earth by Tony Hiss is available from Knopf. Copyright © Knopf.

Tony Hiss is the author of fifteen books, including the award-winning The Experience of Place. He was a staff writer at The New Yorker for more than thirty years, was a visiting scholar at New York University for twenty-five years, and has lectured around the world. He lives in New York with his wife, young-adult writer Lois Metzger. 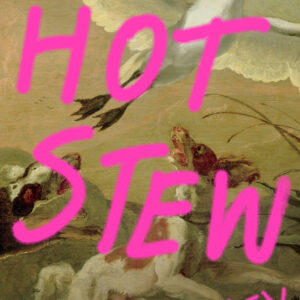 Bastian Rolls Over in bed. He stretches his arm out to the warm dip in the sheets. There was someone beside him and they...
© LitHub
Back to top
Loading Comments...