TODAY: In 1957, a California Superior Court judge rules that Allen Ginsberg’s poem “Howl” is of “redeeming social importance” and thus not obscene.

We cannot stress this enough: without the mighty beaver we are all well and truly screwed • Katherine Gaudet on raising reluctant readers • John Freeman on the power of participatory democracy

• Blaine Wilson (Tsartlip First Nation) on life under one of the oldest treaties in North America • David R. Roediger: Why does everyone in this country think they’re middle class? • Brian Dillon reminds us of the genius of Theresa Hak Kyung Cha • Vaughn Scribner on made-up monsters in the age of imperial conquest • On Bedwyr Ab Ion Thomas’s mission to reach one million Welsh speakers • Amir Ahmadi Arian on navigating literary censorship in Iran • Didn’t think we could love W.S. Merwin more than we already did • Jonathan Alter on a crucial moment in Jimmy Carter’s presidency • Seven books that rethink mass incarceration, a reading list from the National Book Foundation • Sara Reggiani on translating Ellen Meloy and finding an unlikely home in the Utah desert • Jeremy Sigler does what we all want to do: goes on a rant at an Apple Store • Darcey Steinke life in our newly masked world • Ru Freeman: What does it mean to be an American citizen? • How a 27-year-old heiress helped shape the post-WWII world • On malaria, drought, and the personal consequences of greed • James Raven asks what is a book? • Gregory Ariail on Kafka’s newly translated “lost” writings • Juliana Hatfield has been appearing on tribute albums for three decades and isn’t sure why • Henry Kogan on the questions we should all be asking about the president’s tax returns • In which Jamieson Webster does a very very very close reading of the poet Paul Celan • On riding out the COVID-19 pandemic in the heart of the old Holy Roman Empire • What a video game can teach us about getting through a pandemic • Beth Kephart makes a case the memoir in essays

David Biespiel recommends five books, a play, and a film on the meaning of Texas • A month of literary listening: AudioFile’s best audiobooks of September • Midnight’s Children, Luster, Wolf Hall, and more rapid-fire book recs from Cree LeFavour • Mariah Carey’s memoir, Colm Tóibín on Marilynne Robinson’s latest Gilead novel, Parul Sehgal on the legacy of the Zealy slave Daguerreotypes, and more of the reviews you need to read this week • “No contemporary American author writes with more clarity and depth of feeling about the quotidian moral questions of ordinary people“: Lori Feathers on the novels of Marilynne Robinson • New titles from Marilynne Robinson, Nick Hornby, Naomi Novik, and Mariah Carey all feature among the Best Reviewed Books of the Week

5 international crime novels to check out this fall • Thomas H. Carry pays homage to the long tradition of darkly humorous crime novels • October’s best new crime and mystery novels • Mark Pryor rounds up 8 thrillers featuring Americans in Europe • Olivia Rutigliano examines the rearranged Sherlockian world of Enola Holmes • Why writers are always in pursuit of the Maltese Falcon, from Gordon McAlpine • Tyler Maroney goes inside the secret world of private investigators • What are the sexiest books in contemporary crime fiction? • Mike Sager on the mysterious life of a 1970s guru

This audio recording of Wallace Stevens is the opposite of the news.

Outpost by Dan Richards, Read by the Author 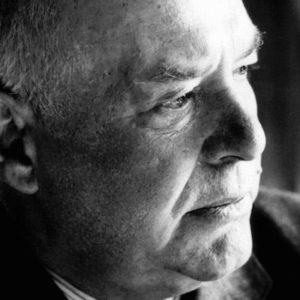 This audio recording of Wallace Stevens is the opposite of the news.

It's been a real week, hasn't it? Here's one thing that may make it the slightest bit easier: Because it is his birthday,...
© LitHub
Back to top