My book is out, or at least on its way back from the printer. I got an advanced copy, which is all that really matters to me, selfish as that may sound. I’m not sure anymore what drove me to obsessively ponder the necessity of its creation for so long and to then see it through to completion. Initially, I had an mysterious urge to write my last poem—to take a bow and bid myself farewell. To step aside. But to also acknowledge that my foolish adolescent dream of being a poet had slowly morphed into a pathetic mid-life delusion.

Maybe this innocent poet dream grew from a basic desire to be listened to, but in an impossibly intimate way. One poem in my new book tries to get at this impulse. It is comprised of a complete signature of blank, perforated pages that await being torn out, curled up into a loose tube, and used (by the reader, at least hypothetically) as an ad-hoc stethoscope, to essentially hear what my heart has to say. Perhaps nothing… if I’m dead. Can I get away with calling this my last love poem?

Another poem is similarly ridiculous—a confession of my juvenile ambition to emerge as the voice of my generation. As if. It appears on the page as a simple math equation: the total number of human beings born into the MTV Generation, minus me. BTW, I’ve taken the liberty of retitling my generation “The MT (as in empty) Generation.” I contend that we were all more or less lobotomized by the daily rotation of rock videos.

The most deadpan and absurdist poem in the collection takes the form of a letter from an imagined fan of my work nominating my Brooklyn apartment to be preserved as a National Historic Landmark: The Sigler House (something like Poe and Dickinson). I figured there was something at stake in admitting to being consumed by such a vainglorious fantasy of posterity.

A short blurb on the publisher’s homepage sums up Goodbye Letter as the deconstruction of the author’s will to write,” let alone “the implied obsolescence of language itself.” It does seem plausible, no?

The poems actually began to loiter around the door of my consciousness like a bunch of underage suburbanites outside a 711. Actually I remember how one kind of came to me fully formed (a readymade) when I was standing in an Apple store at the Genius Bar waiting patiently to voice my complaint: “Why, after only a few years, is my laptop so old? Why are the letters on my keyboard rubbing away?”

I don’t really want rays of blinding techno-light beaming out from within this overrated comic book tool.

The salesperson’s answer was perfectly cool and confident: “It must be your fingers?”

I raised my voice, causing a crowd to gather: “My fingers are not that abrasive.”

“Oily? The skin on my fingertips is not oily! I seriously doubt my hands are any oilier than anybody else’s hands!” I paused to think about my calluses from years of playing guitar. “I have a ’63 Gibson Firebird, and it still has its dots and frets!”

And then I lied. I told him it had originally belonged to this albino twin named Johnny Winter. But it went over his head completely. (I’ll admit, in any case, the guitar is actually the very cheap Fender mini Squire I bought for my daughter when she was 5, which I’ve pretty much played to death. My point is that I was now basically losing the debate.)

Baby Genius seemed to know it when he challenged me with this piece of wit: “Shouldn’t you be capable of typing without looking down at the keys?”

Ouch! Shouldn’t a true virtuoso, he was implying, go forward blindly? A low blow. Clearly we were now at war. “I guess these i-whatevers you cyborgs are selling are just 2001 fetish objects. Toys for tinkering around all day on the web.” My face was now red, I think, and I felt sweat forming on my temples under my Bernie-ish unkempt gray hair. “Toys for clicking! And dragging! And cutting! And pasting… fragments of found words written by others! Plagiarized!”

I was now lecturing to the entire store, and I had some pretty concerned, frightened-looking eyes on me. I bumped it up a notch to maximize the drama. “Presumably, Apple no longer designs these things for…”

And he cut me off: “Crazy customers.”

“You mean cre-a-tive customers—individuals—who intend to take them home, remove them from all the fancy white cardboard packaging, plug them in, and… I don’t know… write something original… and literary.” I was enunciating my words and pacing the bar like a peripatetic philosopher, intent on teaching a cosmic lesson to an entire generation, all the while studying the piece of junk disguised as a U.O.P. (Unidentified Overpriced Product).

I explained to Boy Bartender that Apples’ designers had made a grave miscalculation by painting the keys black. Then I tried to articulate how “the corporate designers and manufacturers in their diabolical laboratories had sacrificed durability in order to stencil the letters so they’d be clear and transparent, thus allowing light from inside the computer to shine out through their chinks.”

Impressive? Not really. I don’t really want rays of blinding techno-light beaming out from within this overrated comic book tool that turns out to be less useful than a yellow legal pad and a snapped Crayola crayon.

I do, however, want my own rays, or brain waves, or pulsations of love to transform the ether. I do want inspiration to sizzle from my finger tips and blaze across my alphabet like a xylophone doused in lighter fluid. This thing should be built to withstand me, right? Like Mahler’s Hammer. I should be able to type all night without trashing this featherweight folded paper plate. It’s cheaper than some crappy sad thing you’d buy with the hundreds of tokens you’ve accumulated from playing skee ball in the arcade on the boardwalk of a deserted beach town on the Jersey Shore all winter.

I was now venting some pretty abstract sentiments when another shopper tried to interrupt me and steal my thunder. I barked: “wait your turn old man.” As is obvious to anyone reading this, I was now creating a very unpleasant situation. No doubt it was all being caught on a security camera, and some guy trained by Erik Prince was no doubt on the way with his taser. I was now holding things up, wasting enough time to cause the Apple stock to plunge. I was sending shock waves of audible rage through the store like a TED-talk gone awry.

And yet, I have to say, the guy was remaining surprisingly chill. Was he on lithium? His clever tone had not changed a bit. He’d heard me out, and was about to give his thoughtful, indeed accommodating response, offering to replace my keyboard entirely free of charge.

But apparently, out of my mind as I was, I cut him off before he could satisfy me with an excessive string of hypotheticals: “Even if I dipped my fingers in turpentine, I’d still expect to attack the keyboard and set my epic prose poem free till it felt like a satisfactory first draft.”

And “Did Glenn Gould have to bring in his Steinway to get the keys replaced each time he tapped out Bach’s Well-Tempered Clavier Book 1 with those mighty knuckles? No!”

QWERTY, that concept we all know and love, was in the midst of a full-fledged paradigm shift.

And “Would any of the typewriters dug up from the landfills in Staten Island show this much manual wear and tear? No!”

And “Even an army of pasty secretaries in horn-rimmed glasses filling the 1950s Manhattan skyline typing around the clock couldn’t have eroded their industrial machinery this quickly?”

By now I had worked my way up to a truly imaginative supposition: “Did the letters rub off the keys in Naked Lunch? No. That typewriter oozed puss and had the legs of a cockroach, and even in this diseased state, its alphabetical keys remained in perfect working order.”

“What’s a naked lunch,” asked the clone? Alas. I was clearly fighting a losing battle; even after getting the offer I was hoping for, I was still spinning my wheels without traction. It was a sign, I guess, of grief, of a deeper sense of disappointment and despair. Somehow I must have known I had lost the game—that typing was over, that writing was over, that poetry was over. All of language had gone bust.

QWERTY, that concept we all know and love, was in the midst of a full-fledged paradigm shift, being replaced by some kind of AI brain-to-brain thought bubble algorithm: Mac-manipulated “i-telepathy.” Words, to put it simply, were now on the verge of obsolescence.

I went home, went to the fridge, cracked a White Claw, threw on my headphones, turned up Benny Sings, and popped open my laptop one last time. Looking down, I began to say goodbye to my beloved keys, as I typed my very last poem, as if I were individually saluting the letters that had served me so well.

I thought of Robert Walser’s last boot prints in a snowy field leading up to where he collapsed on his back and let the floating snow petals melt on his lips and freeze his last vowels into a block of larynx, as a white sheet accumulated over his face and chest and knees, as his breath constricted to a fading warm straw. I pressed each key in order.

First the top row: QWERTYUIOP. Then the middle: ASDFGHJKL. Then the bottom: ZXCVBNM. My work as a poet was now complete. I’d found an honest way to dismount, to say goodbye, knowing that I’d already died so long ago. 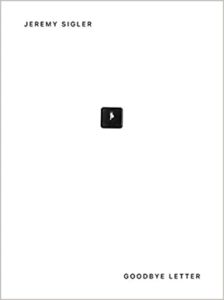 Jeremy Sigler was born in Baltimore, Maryland, in 1968. After studying at the University of Pennsylvania and UCLA, he moved to Brooklyn and began writing poetry. He worked as a secretary for John Ashbery in the 1990s while working as an editor for the Swiss art journal, Parkett. In 2006, he received a Lannan Foundation Fellowship in Marfa, Texas. He is the author of numerous poetry collections, including To and To (1998), Mallet Eyes (2000), Math (2008), Crackpot Poet (2010), ABCDEFGHIJKLMNOPQRSTUVWXYZ (2014), and My Vibe (2017). He was the editor of the Dia Art Foundation exhibition catalog, Carl Andre; Sculpture as Place, 1958-2010 (2014). His art criticism has been published in many journals, magazines, exhibition catalogs and monographs, and he has taught art and literature in numerous colleges and universities.

Natalie Diaz on Writing Poetry as a Body 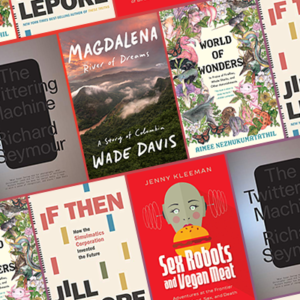