TODAY: In 2001, Douglas Adams, author of The Hitchhiker’s Guide to the Galaxy, which sold more than 15 million copies in his lifetime, dies.

Author photos: a taxonomy • Jon Meacham on E.B. White and American democracy • Sixteen poet biopics, ranked • Douglas Brinkley on our love of ranking American presidents • On illustrating the ideas of Walter Benjamin • As we welcome the Royal Baby, Robert Morrison wonders why America is so obsessed with the British royal family • Who creates an Australian national literature? Nam Le on David Malouf and the violence of world-building • Nina Subin on the careful process of taking an author’s photo • On creating a new toolkit for memoir writing • The passionate beginnings of Georg Forster, revolutionary travel writer

• Natasha Trethewey on Eudora Welty’s photographs • How a run-down Hollywood hotel achieved legend status • On the selfie-filled memoir of Halldór Laxness • Patricia Dwyer on Elizabeth Bishop, loss, and coming out after 20 years in a convent • Erika Swyler on the autobiographical truths of fiction • Damian Barr moves from memoir to fiction and finds inspiration in a real life crime • On class, gender, and the weird dynamics of eating beef in America • Existential dread and the art of boat-building: on fatherhood and large projects that make no sense • On the Chinese American laborers who built the Transcontinental Railroad • Is it still “punk” when the musician makes it big? • The paradoxes of prison rehabilitation: Rachel Louise Snyder on the struggle to learn nonviolence in a violent place • How the Bubonic Plague almost came to America • One German’s two-decade search for a poem she couldn’t quite name • Balancing power in the Lebanese borderlands • Esi Edugyan on the fraught relationship between the writer and the void • And in honor of  MOTHER’S DAY this Sunday, some of the many ways of looking at motherhood: • Tobias Wolff on the iconic memoir he never intended to write • John McMurtrie finds his mother in the pages of her favorite cookbook • The stories mothers never tell: a collaborative essay • Sarah Knott, in the moments after birth • “Original Fire,” a poem by Louise Erdrich

Michael Lewis on Harper Lee’s murderous reverend, Joyce Carol Oates on Ted Chiang’s humanist sci-fi, and more of the book reviews you need to read this week •  The Book Review is Dead, Long Live the Book Review: 14 literary critics on algorithms, Elizabeth Hardwick, and that Harper’s essay • An Experimental Library Grows in Brooklyn: Dev Aujla’s Sorted Library is reimagining the experience • Rabbits For Food author Binnie Kirshenbaum recommends five unforgettable novels of mental distress, from The Return of the Soldier to Mrs. Bridge • Leah Schnelbach recommends 5 Sci-Fi and Fantasy books to heat up your May, from Ted Chiang’s Exhalation to Karen Russell’s Orange World • For this week’s Secrets of the Book Critics, Rumaan Alam on the foolishness of fixed opinions • David Brooks’ The Second Mountain: genius synthesis of world-class thinkers OR foggy bait-and-switch • Ted Chiang, George Packer, Harper Lee, and Dr. Seuss all feature among our Best Reviewed Books of the Week

W.M. Akers grapples with the all-too-frequent elements of hate in classic pulp fiction • It’s not all sun and fun in the French Riviera: Crime along the Cote d’Azur •  Lisa Levy recommends

May’s best psychological thrillers •  Editor Juliet Grames on writing her first book – and breaking all her own rules • Vince Houghton on Stanley Lovell, the chemist behind some of WWII’s craziest schemes • Mollie Cox Bryan rounds up the best mysteries set during Hollywood’s Golden Age • Casey Cep talks true crime, deep research, and following in Harper Lee’s footsteps • Laura Elliot rounds up the 10 greatest crime novels set on islands • Tim Hennessy on what made Milwaukee noir • Who really killed McKinley?Lawrence Goldstone investigates • Laird Barron on the indelible mark of the Alaskan wilderness, in life and in noir
Lit Hub Daily
Share:

Did you know that Shakespeare once caused a deadly riot in NYC?

A Brief History of Queer Language Before Queer Identity 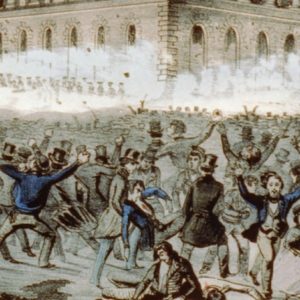 Did you know that Shakespeare once caused a deadly riot in NYC?

He did! On this very date, in 1849, outside the Astor Place Opera House in New York City, 22 people died after two actors—one...
© LitHub
Back to top