“Here, try it on!” the punk poetess Patti Smith urged me. Together with the photographer Dennis Morris and her guitarist Lenny Kaye, we were sifting the racks of a Japanese store, unusual for the times, in West London’s Notting Hill Gate. It was 1976, and Smith had recently begun to find herself in an unusual position for a native of the counterculture—making unprecedented cash from her first LP, Horses, a surprise critical and commercial success. Being a leftist bohemian, she was showing generous integrity by doing something unexpected—she bought both myself and Morris a proper present.

Smith wanted to spread her largesse, and being a writer herself for Creem magazine as well as a published poet, she did not regard the rock media as dodgy lackeys to be ducked, but rather cultural workers like herself. Her gracious gift, a zip-front, black velvet quilted Mao jacket piped in red, was actually a bit boxy—but I wore it for years. After all, Patti Smith got it for me. And besides—it was free!

Smith would be garlanded with awards including the French Ordre des Arts et des Lettres in 2005, the National Book Award for her 2010 memoir Just Kids, and membership in the Rock and Roll Hall of Fame. She continues to help artists, now on a somewhat larger scale; in 2017 she bought the reconstructed chateau of her great inspiration, the poet Rimbaud, on the Franco-Belgian border. It was there that Rimbaud wrote his “Seasons of Hell” at just 19 years old, the match that lit a brief but incandescent life. His intensity, the idea of living life ablaze even if you are extinguished too soon, has always inspired Smith. As we wandered back down Portobello Road to her hotel from Notting Hill with our shopping bags, she told me, “I don’t have a stage persona or a record persona, not one that’s separate from myself.”

When we chatted on that sunlit afternoon, a British woman’s right to sign for her own bank loan without consent from a father or husband had only been legal a year; a further four would pass before risqué boundary-flexer Madonna would wittily bitch-slap the old association of punk females and the anti-consumerist counterculture with “Material Girl”; ironic or not, her compelling persona helped to hustle in a new, Reagan/Thatcherite, more me-centric groove. Unlike the Raincoats, more like her fellow New Yorkers Blondie, in the song’s video, Madonna exuberantly channels tropes of 1950s sexuality—notably our sacrificial blonde Marilyn Monroe, both brazen and demure as she purrs, “Diamonds Are a Girl’s Best Friend” in 1953.

Of her complex array of personae, that specific Madonna moment signaled, winking: Who cares that Congress just rejected the Equal Rights Amendment! We still have our old-school feminine wiles! Onscreen, our MaMas, Madonna and Marilyn, flaunted parrot-bright satin, red and hot pink. By contrast, as we traipsed into the Portobello Hotel lobby, Patti Smith was wearing an oversize man’s dark jacket that could have been borrowed off a scarecrow. The radical newness of her downbeat, un-girly-girl image would remain her “look” and be a consistent aesthetic foil for Madonna’s decades of frisky ego games.

That monochrome, boyish severity signals Smith’s integrity and authenticity, to both her and her audience. Reliably, every show is a commitment and a communion, in which she appears to strip her spirit down to below the bone, reaching for shamanistic revelation and rebirth. After she fell off the stage in a show in Florida in 1977 and broke several vertebrae, narrowly avoiding death or paralysis, she spoke to me at the Sounds office in then-shabby Covent Garden, long distance on the transatlantic telephone. “I was spinning like a dervish—you’ve seen me do that. I’m like the kind of performer that courts risk, I court death,” she proclaimed. The Field Marshal, as she called herself, saw the legendary white light—but was called back to round up her troops once more.

For the writer and performer of “Free Money,” the ability to be free with money (as opposed to money being free) was an expansive rejection of the frugality she had grown up with in her hardscrabble New Jersey working-class family. The sight of her mother painstakingly sticking the stamps for “free” giveaways, trying to stretch the family’s meager resources as best she could in a system designed to never let her get ahead, infuses “Free Money” with a piercing elegiac yearning.

Every night before I rest my head
See those dollar bills go swirling ’round my bed
I know they’re stolen, but I don’t feel bad
I take that money, buy you things you never had
Oh, baby, it would mean so much to me
Oh, baby, to buy you all the things you need for free

Starting with fragility, over piano player Richard “DNV” Sohl’s lyrical triplets, Smith’s gentle vibrato caresses the lines, drawing the listener in until, quite smoothly, the speed builds, just like the whirling dervish she said she channels on stage; rock ’n’ roll propulsion kicks in, with its smart changes and statement drum fills by Jay Dee Daugherty. Then it is right into overdrive, pushed by Lenny Kaye’s urgently scratched chords and, having described the material delights she wishes she could offer, Smith chants the title repeatedly, the Field Marshal calling on all to find the spirit within themselves which is their true engine, and the real moneymaker to shake.

It has remained in her set for four decades, and she renews its meaning each time it is performed. For Patti Smith, all the pain that rises in the chest and blocks the throat when one longs to save a beloved and money would make all the difference is palpable in every performance of “Free Money.”

These women are artists and determined to remain so, which is a job in itself, though one whose financial rewards have historically been unpredictable, whatever your gifts.

The career of 1980s New York artist Carl Apfelschnitt (lost to AIDS too young) was buoyed by rich patrons, and he would comment, “Money is love in action.” So it can even be for an anarchist, as when Vi Subversa came into an inheritance and was able to fund Crass’ first 45. Smith’s early “outsider” period was well spent preparing for a lifetime of making a variety of art.

Like all conscious first-generation punks shaped by the student riots of the 1960s in London and Paris, Smith was touched by the free-living, free-loving ideas of the Situationists, like Guy Debord, and their illustrated cartoon-style injunctions made to startle, like “Beneath the paving stones—the beach!” Her approach to life and art was bold, exploratory, fulfilling the movement’s agit-art manifesto from May 1960: “At a higher stage, everyone will become an artist, i.e. inseparably a producer-consumer of total culture creation, which will help the rapid dissolution of the linear criteria of novelty. Everyone will be a situationist, so to speak, with a multi-dimensional inflation of tendencies, experiences, or radically different ‘schools’—not successively, but simultaneously.”

Thanks to talent and timing, Smith transcended the general fate of mid-1970s women. It was only when the decade hustled its way into the next “me-terial” decade that gender income equality started to move more briskly. Between 1978 and 1990, the game of catch-up took us from a tragic 61 percent pay gap to a still utterly weedy and inexcusable 76.5 percent of what men got. And after that, things flatlined. Female incomes froze while males’ rose—just in time for the 1990s Riot Grrrls to feel it. Add to that, these women are artists and determined to remain so, which is a job in itself, though one whose financial rewards have historically been unpredictable, whatever your gifts.

As fear battles with surveillance and danger to see which will drive the civil liberties of our international capitals, and scuzzy bohemia from Paris’s Les Halles and New York’s Lower East Side to London’s Ladbroke Grove mutates into glossy condos—how much space will be left for budding artists to “duck and dive”? Nonconformity has been branded as a lifestyle just when it has largely been expelled from the big cities. However, committed female artists will find a way through, as Patti Smith did in her looser time. The story of female punks and money, as told in their music, is a template for our direction as a whole in this increasingly economically divided society.

Though closely associated with punk, Smith’s creative credentials extend further back into the days of Andy Warhol, and before that to the beatnik bohemians she associated with: free spirits such as jazz icon Ornette Coleman, writer William Burroughs and poet Allen Ginsberg. Prior to becoming a rock star, she was a dramatist and working poet. By the time Horses rode in, Smith’s countercultural standing reputation had translated to the growing first-wave New York punk scene. Its locus had also shifted, a few blocks down and east: from Warhol’s silver-painted Factory off Union Square and its café, Max’s Kansas City, down to the scuzzier, more easterly Bowery, then home to bums and drunks, and a grotty dive bar called CBGB, the mecca of downtown punk.

She was joined there by the rest of the city’s new wave—an artier marketing term for punk devised by Seymour Stein, the managing director of WEA/Sire Records, the label which signed a swathe of downtown New York coolmakers including Madonna and Talking Heads with their intense female bass player, Tina Frantz. Re-calling the marketing brainwave, Stein writes, “Nothing at all wrong with punk, but bands like Talking Heads, and there were others, were something different.”

Vive la différence. A new breed of autonomous, self-defined, and uninhibited female rock star, in her creative partnership with Robert Mapplethorpe, Smith did not shrink from exposing armpit hair or posing nude, more changeling than centerfold, oddly angled by a radiator on a wooden floor. Her portrait on Horses, in which she wears a man’s open-neck white shirt and tie, slinging a jacket over her shoulder like an urchin Frank Sinatra, is watchful, knowing yet curiously innocent. The images made her as much of an androgynous icon as Jamaican multi-talented artist Grace Jones, glowering in her low-cut tuxedo and flat-top hair, cigarette dangling dangerously, shot by Jean-Paul Goude.

Smith courted the edge. She had not specifically focused on making work calculated to attract money. No doubt she made artistic choices that she trusted would not alienate an audience, but she basically made the sound and told the stories she wanted to hear. As she chronicles in her memoirs, like any aspiring artist without family money, Smith knew how to enjoy life without necessarily having much financially. Playing it her way was of more significance, and appropriate material reward would hopefully follow. 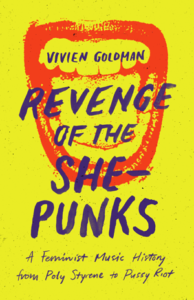 Excerpted from  Revenge of the She-Punks: A Feminist Music History from Poly Styrene to Pussy Riot by Vivien Goldman. Used with permission from the University of Texas Press, © 2019

Born in London, Vivien Goldman has been a music journalist for more than 40 years and was the trusted chronicler of Bob Marley and Fela Kuti. She was a member of the new-wave bands Chantage and The Flying Lizards; Resolutionary, a retrospective compilation album of her work, was released in 2016. A former documentarian, her five previous books include The Book of Exodus: The Making and Meaning of Bob Marley and the Wailers’ Album of the Century. 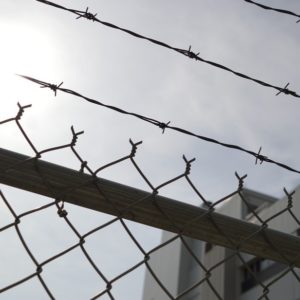 I'm driving through coal country, on the border between Pennsylvania and New York. Summer of 2018. Rainy. Several months...
© LitHub
Back to top
Loading Comments...