What's Not to Love About Descriptions of Food and Strong Opinions About Poets?

My favorite book by Halldór Laxness is titled When I Was Young. This is the second volume in Halldór’s collected memoirs, which were published from 1975 to 1980. In When I Was Young, Halldór tells of his journey, at the age of 17, from Iceland to Copenhagen aboard the passenger ship Gullfoss. He is wearing a cutaway coat, and perched on his nose are spectacles with lenses made of window glass. He takes himself extremely seriously. He knows that his first novel, Child of Nature, is being printed back home in Iceland, and he knows as well that in the months and years to come, he will earn his living as a writer. He is a determined young man, or, as he states of himself in the memoir: “I wanted to learn to write books. To me, anything else was useless.”

Halldór describes this 17-year-old as a “costumed kid playing an adult.” This is an accurate description, as he keeps to himself, reads a book by Maxim Gorky, and takes snuff. “There was no one else my age,” he says of the ship’s passengers, and is surprised that a few people actually wanted to talk to him, “an adolescent with hair like an artist’s.”

Oftentimes, Halldór’s peers also saw him as a costumed kid playing an adult. Living at the retirement home where I worked when I was 16 was a woman who had been confirmed along with Halldór. Her memory of that time was not entirely clear, except for her vivid recollection of when the other children in their confirmation group asked Halldór Guðjónsson from Laxness to play tag with them. He responded by crossing his arms on his chest and replying haughtily: “Not interested.” The kids never asked him to play again. Nowadays, he might have been taken aside and asked to explain his behavior, but back then, he was simply considered an eccentric. He got his own way. At least he got an adult somewhere to make spectacles for him using window glass. And his mother footed the bill for the printing of his first novel. Halldór Laxness had the freedom to invent himself.

He fashioned himself after all sorts of men: Lord Byron and Beethoven and Rikharður Jónsson, the painter. The young Halldór’s role models all seemed to be male. I stopped at page 17 to count up the men and women that he names, and came up with 19 men but only one woman, Marie Louise, who was in fact not a woman, but the name of a type of soup.

Halldór Laxness may have known a thing or two about the people aboard the Gullfoss, but he did not know that 55 years later, he would write the book When I Was Young, in which he pokes fun at the boy he once was.

It’s a bit disconcerting thinking of what sort of trouncing Halldór might have given you if he’d met you on the street.

The account actually begins on an unexpected note, when Halldór tells of the first soup that he tries in the world beyond Iceland, the aforementioned Marie Louise soup. Halldór is extremely picky about food, and can barely bring himself to taste any of the delicacies that he is served. Even clear water in a clear pitcher revolts him.

Once done with his descriptions of food, Halldór can finally turn to his peers, many of whom receive a skewering. He has little regard for the national poet, Jónas Hallgrímsson, who is—in Halldór’s opinion—quite average. One of Jónas’s chief works, Gunnarshólmi, is just “a good poem”—nothing more. Another great poet, Einar Benediktsson, is also the target of Halldór’s derision, when Halldór says that he has “built a herculean container around air.” Halldór visits Einar when he is still in high school, but in his description of their meeting, Halldór seems mainly concerned with criticizing the poet as a terrible host. Einar served no food—just sherry, and then did not even propose a toast! And he never smiled—which Halldór finds completely ludicrous. I myself find it funny that such a picky eater as Halldór would even want to be fed in another man’s house.

Halldór has strong opinions on the conduct of Iceland’s major poets. They should have been offering high-school students delicious meals, and with smiles on their faces. In his descriptions of people, Halldór is preoccupied with physical endowment. Some people limp, others are fleshy, while a few are slim and even others scrawny. One person not only has an arched back, but is chubby as well, with a fatty neck. It’s a bit disconcerting thinking of what sort of trouncing Halldór might have given you if he’d met you on the street. Most important, though, was to make sure that you were sober in his presence, as respectable drinkers were particularly prone to his scorn; for instance, when he writes: “A drunken man is in my eyes one of the most disgusting sights I know. Whenever I have a nightmare, the monster that assails me is invariably a drunken man or woman, trying either to break into my house or my car in the dream.”

When I Was Young is loaded with selfies, as well.

Halldór seems to hate everything and everyone—which makes for enormously amusing reading! When I Was Young is loaded with selfies, as well. Just as people nowadays take selfies with celebrities, Halldór uses language as his camera in relaying his meetings with the poets Einar Benediktsson, Tómas Guðmundsson Jóhann Jónsson, and also Hallgrímur Kristinsson, the chairman of the Federation of Icelandic Cooperative Societies! YOLO!

Halldór wants the world to know that he met these people and that they got to meet him. He also wants others to know that he has touched others’ lives, for example when he states that he was the only one who said goodbye to Svala Einarsdóttir, the daughter of the poet Einar Benediktsson, before she sailed overseas to get married. That he had carried her suitcase for her. Svala is one of the very few about whom Halldór writes beautifully in this book. The others are the poet Jóhann Jónsson and the artist Muggur. And what is it that grants these three such good fortune? Yes, they had the sense to die young. That appears to be a rather secure way to get on Halldór’s good side.

Many individuals appear in the memoir, people who are still the subject of Icelanders’ curiosity and others who have disappeared from the social dialogue. It is rather astonishing, in fact, for Halldór to have gone to the trouble of recounting all of these people, in the light of how little actual influence they had on his life. Yet it all forms a unified whole, and Halldór would hardly have been inclined to write this book if he had had to restrain himself. Through it all, he slips in messages that would be fun to put on T-shirts and distribute to young writers—for example this one: “The problem with writing is knowing how much to leave out.“

Halldór invites readers to join him on his journey, which we are only too eager to do, though perhaps having something like Google Maps handy would help us feel more secure. Our guide is not entirely reliable. In the final chapter of the book, we find this statement: “You can never tell your own story; it just becomes more nonsensical the more effort you put into telling it truthfully.“

Can it be that Halldór was embellishing? Fabricating? Perhaps his account should be re-read with the idea in mind that he was doing so. The Marie Louise soup may in fact have been as delightful as its name and he may very well have enjoyed meeting Einar Benediktsson, who proposed a toast, smiled, and burst into song. In When I Was Young, we have an account of how a 74-year-old man sees himself as a young man. He was awkward, helpful, and haughty, but at the same time, rather delicate. Above all, it is an account of a man who sailed out into the world with grand designs and stuck to them.

Gerður Kristný will be appearing at several events at this year’s PEN World Voices Festival.

Gerður Kristný has published poetry, short stories, novels, and books for children, as well as a book about the Westman Islands Festival in 2002 and the biography Myndin af pabba—saga Thelmu (A Portrait of Dad—Thelma's Story), which received The Icelandic Journalism Award in 2005. Other awards for her work include the Children's Choice Book Prize in 2003 for her book Marta Smarta (Smart Marta), the Halldór Laxness Literary Award in 2004 for her novel Bátur með segli og allt (A Boat With a Sail and All) and the West-Nordic Children's Literature Prize in 2010 for the novel Garðurinn (The Garden). Gerður's collection of poetry, Höggstaður (Soft Spot), was nominated for the Icelandic Literature Prize in 2007 and she then won the prize in 2010 for her poetry book Blóðhófnir. She lives in Reykjavic with her husband and sons. 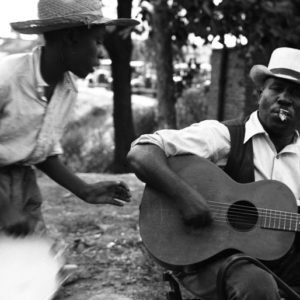 How Eudora Welty's Photography Captured My Grandmother's History I was given my first copy of Eudora Welty’s Photographs in 1990, not long after the book’s initial publication. Back...
© LitHub
Back to top
Loading Comments...