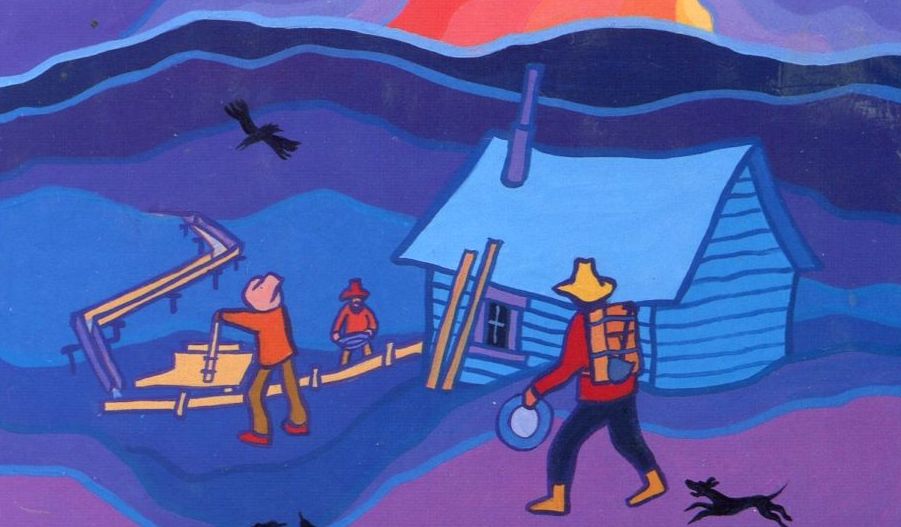 Deep within the Mary Poppins bag of the internet, there exists a lost-and-found for poetry. Picture it as a virtual corkboard full of post-it-sized cries for help. Lost sonnet! No author! It is the National Poetry Library London’s Lost Quotes page. If you are looking for a poem and all you have is a snippet, a few metric feet of something smooth or edgy you fell in love with, you can send the Poetry Library a note and ask for help. Missing, you would write, a ballad.

This has happened to me many times. I spent hours and hours in search of lost poems—sometimes successfully, sometimes not—well before there was a website to come to my aid.

It began when I was twelve years old in Heidelberg, Germany, and heard what I thought was the greatest poem of all time on German public radio. It went like this: There are strange things done in the midnight sun by the men who moil for gold. I don’t remember why this poem got broadcast, or why they played it in English at a time when everything on German TV or radio was dubbed, but there it was, abridged as I later discovered, and spoken in a rhythm so addictive it made my head spin. The poem told the ballad of Sam McGee, a prospector in the Yukon, who freezes to death but snaps back to life in the sizzling heat of his own cremation. I can still hear the speaker’s booming baritone, making the syllables roll over the airwaves like the inevitable Arctic winter.

The ballad of Sam McGee was, for my 12-year-old self, an astounding work of art. I had never heard anything like it, and I had to have it. Problem was, I didn’t quite catch the author’s name. Or the title. It was the 1980s and Google did not exist. All I knew was that this poem came from America. And thus began my decade-long hunt.

My hometown happened to boast of an American library at the Amerikahaus, an American cultural center in the heart of downtown. Its shelves were filled with practical tomes on how to prep for the TOEFL, GRE or SAT, as well as resources for internships in the US. There was a poetry section, but my intense skimming over all of the first lines in all of its volumes didn’t reveal the origin of the words I had absorbed and recited over and over again in my head.

There are strange things done in the midnight sun. I eventually found a librarian who said she believed that the poem I was looking for had been written by the Canadian poet Robert Service. Whenever I came across a book of poetry, any book of poetry, I would quickly open the page of contents and look for his name while my hope would spring high in anticipation. Robert Service’s name, however, never appeared.

Still, I kept looking. I started going to the American library more often. I branched out and searched the shelves of other local libraries. I enjoyed the hunt and found other poems along the way that I started to translate into German because the existing translations did not please me, like T.S. Eliot’s “The Naming of Cats” and Charles Baudelaire’s “The Albatross.”

While I had looked for a lost poem I had found an entire language.

I wanted to be a writer but I wasn’t ready to take the leap. Instead, I chose the lucrative path and studied law. It didn’t go well at first. In the law library, I felt like a visitor. At parties, I left early, knowingly and willfully cementing my wallflower status. The world felt unstable because I didn’t fit in, and poems were there for me when I needed them most; consolation for a distraught college girl, lost in self-doubt and Minderwertigkeit, a feeling of inferiority.

At age 23, I remember spending winter break on the island of Sylt on the North Sea, trying to decide if I should give up law school to become a writer. There I was, marching along the waterline in deafening winds, fierce gusts ripping syllables from my lips, barely able to breathe, cheeks burning, reciting my translation of “The Albatross” over and over again until I got it just right.

How the poet resembles this prince of the sky, chasing storm clouds and mocking the arrow fly by. But confined to the ground, where they spit, laugh, and kick, he is clumsy and crude and his wings way too big. My feet would follow the rhythm of these words.You could likely trace the poem’s exact metric pattern by looking at the depth of the imprint of my boots, anapest after beautiful anapest.

A few years later, in my late twenties, my father became very sick. In his many years of declining health, he did all he could to make himself useful. His hands turned white and skeletal with progressing neuropathy. But he could still work a knife, so he cooked. He could just barely flip the pages of a book, so he read. After he died, I found a copy of Deutsche Lyrik on his bedside table. It had pieces of paper sticking out at varied lengths like a cheap haircut. These were bookmarks, the non-electronic kind, leaving behind a trail of favorites, one of them Rilke’s “The Panther.”

My father had always understood why I had sent myself on this quest for Sam McGee. As fierce introverts, we had shared a deep appreciation for the acuteness of the exact right word. We loved how poets could paint images with words that left no need to explain any further. We could feel a pang in our gut when a poem was good. I know that my father must have clung to the lines of a poem when he died, repeating them like a broken record, a meditation of a life cut short, until death ripped the syllables off his lips. Stop all the clocks.

I finished my law degree. I wrote in my free time. I had regrets. But somewhere along the way the course of my ship changed. It was as if my father had given me permission to follow the wind. I was transformed by the language that attracted me so much. It had opened up a new world to me, and, in my mid-thirties, I found myself moving to California and writing. I am not sure this would have happened if I hadn’t fallen in love with a ballad at the age of 12 and spent my afternoons in the reference room of the Amerikahaus.

On the day I finally found Robert Service’s Spell of the Yukon—on the shelf at Border’s, another lost place—and in it, “The Cremation of Sam McGee.”

I had never heard anything like it, and I had to have it. Problem was, I didn’t quite catch the author’s name. Or the title. It was the 1980s and Google did not exist.

I had forgotten I was still looking for it. Almost 25 years had passed since I first heard it on the radio. The small book was invisible to most, but I spotted it right away, a skinny spine between the works of Walter Scott and William Shakespeare, and instantly felt a pang in the gut. I remember how the clatter of coffee cups at Border’s became soundless. There it was!  All I had to do was reach for it and bring it home. I pulled the book out, opened it, felt the sweetness of anticipation, read

—and then I put it back. There are strange things done in the midnight sun.

I didn’t bring it home. I had finally caught this elusive butterfly with my bare hands, had let it tickle my palms, and then set it free. Why? Did I feel I already, metaphorically speaking, owned it? That I didn’t need it anymore? No. It was the realization that while I had looked for a lost poem I had found an entire language.

I still search for lost lines of poetry. Last week, I wrote a note to the Lost Quotes Page of the National Poetry Library London and asked them for help. There’s a line that has circled my life like a moth, I told them:

Crept to his feet to offer his seat to the blind lady. Google hasn’t helped me find it.

They answered within a day.

Dear Susanne, Thank you for your enquiry to the National Poetry Library. Unfortunately, having searched through our various poetry indexes and databases, we have been unable to identify the poem.

Crept to his feet to offer his seat to the blind lady.

Do you know it? I am tempted to say, if you do, please send it to me. But I won’t. I think I like that some things can still be lost, and good things might happen when we set out to look for them.

If you are in search of a line, you could give the Lost Quotes Page a try, too. Missing, you will write, a ballad, a feathery thing. Last heard thirty years ago. Echoing ever since.

Susanne Tägder lives in the San Francisco Bay Area with her family where she works and writes in two languages. Her short fiction and essays have appeared in various literary magazines in Germany. She is also a participant of Hoergang, the annual Litquake Festival in Munich. 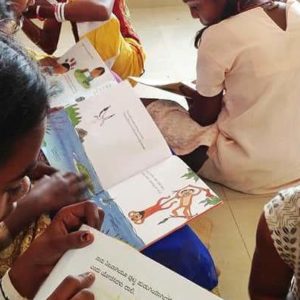 When I arrive at Bangalore's Buguri Community Library, Sangeetha Ramesh is reading aloud from a Kannada children's book to four...
© LitHub
Back to top