TODAY: In 1592, the London theaters are closed, remaining so for about 16 months due to an epidemic of bubonic plague.

New from Rebecca Solnit: Not caring is a political art form • When the president liked to read: a brief history of Barack Obama’s recommended reading lists (oh look, Reinhold Niebuhr!) • Ahmed Saadawi’s Frankenstein in Baghdad tells a new story of the war in Iraq • Rebecca Makkai: as hard as it may be, we have a responsibility to write across difference • Is this the biggest book cover trend of the year? • “You write what you want, the way it has to be.” Real talk from one of our greatest living writers, Anne Carson • “The most famous unknown of the century!” On Djuna Barnes queer, modernist classic, Nightwood • Camille Perri on subverting genre and queering romantic comedy • And while we’re looking back: on Orwell, Metropolis, and the “future shock” of David Bowie’s Diamond Dogs • For the first time online in full, read Roxane Gay’s short story “Sweet on the Tongue,”from her new collection, Ayiti • “So when does my mythic writer’s life begin?” Dana Schwartz thought that publishing a book would change everything for her… Reader, it didn’t • Why do some people feel compelled to cheat, connive and swindle? (And why do we love reading about it?) • Dear Book Therapist: How do I survive my C- marriage? • For novelist Richard Flanagan, the last subversive, truly private act might be reading a book • Kristen Arnett: librarians will guard your personal data fiercely (and they might even look the other way about the porn you watched that one time “by accident.”) • I hate your asterisks, and your dinkus, too: Brandon Taylor is fed up • Caoilinn Hughes kindly asks that you take your loud chewing elsewhere: on being a writer highly sensitive to sound • “I had to live in the shadows while contributing to the welfare of this nation.” José Angel Maldonado on living the undocumented life, and the need for action • It’s been a tough week. Here are 12 writers for whom every days is “take your dog to work day”

From a Pulitzer Prize-winning comic novel to a lesbian pulp noir, Lambda Literary recommends 7 contemporary classics of LGBTQ literature • Jane Ciabattari spoke to Murder on the Left Bank author Cara Black about five books that reveal Paris • This week in Secrets of the Book Critics: Chicago Review of Books editor Adam Morgan on Penelope Fitzgerald, Eve Ewing, and Chicago critics • Colm Tóibín on Tommy Orange’s There There, Edmund White on Édouard Louis’ History of Violence, and more Book Reviews You Need to Read This Week • New titles from Tim Winton, Rebecca Makkai, Penelope Lively, and more all feature among our Best Reviewed Books of the Week

The 72 most-anticipated crime, mystery, and thriller reads to last you all through the summer •  Sarah J. Harris rounds up the most visually striking new crime novels, from the Australian outback, to the bright lights of the circus • Crime novels make the best travel guides: Jordan Foster recommends 5 international crime novels for the armchair traveler • J. G. Hetherton recommends 11 reporter mysteries starring investigative journalists, from Gillian Flynn’s Sharp Objects, to Laura Lippman’s Baltimore Blues • Edgar Cantero on teaching children to love mystery, one comic at a time, and learning to love noir through parody • Martin Walker on gourmand detectives and crime fiction’s best and worst meals,from Mme Maigret’s coq au vin to Philip Marlowe’s BBQ • Carsten Stroud looks at 7 classic thrillers that explore the strange, the unexplained, and the supernatural • Caroline Kepnes on Providence, social media, and monsters among us •  Lisa Levy guides us through New York’s spy museum • Donald S. Murray digs deep into the history of peat bogs, final resting place of the criminalized • “There’s something wrong, on a visceral level, about the very idea of children murderers.” Nina Laurin on the most unsettling mystery of all•  Eleanor Herman investigates the poisoning of a royal mistress, 500 years ago • Raymond Villareal on writing a vampire novel as a legal thriller 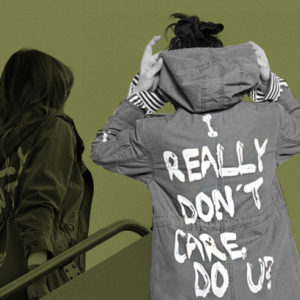 There’s an argument about whether Melania Trump’s faux-combat jacket emblazoned with “I REALLY DON’T CARE DO U”...
© LitHub
Back to top