Caoilinn Hughes Kindly Asks That You Stop the Loud Chewing

A: “What’s the apple doing on the sink?”
B: “I was going to eat it earlier but then I thought it would be too noisy.”

It was all over the news a few years back: people who get extremely distressed by specific repetitive noises—notably mastication, respiration, keyboards clicking, cutlery scraping—may suffer from a newly discovered condition called misophonia, or decreased sound tolerance. Something to do with salience networks in the brain going into overdrive, producing strong emotional responses that differ distinctly to the mere annoyance non-sufferers experience at the same noises; prompting a fight of flight response (aka: hyperarousal) in sufferers.

That is to say: my brain processes your pen clicking as a threat to my survival. The overwhelming urge to punch someone in the mouth and/or to flee is typical.

Misophonia sounded to me like one of the many undiagnosable conditions plaguing the species, such as “picky nose syndrome” or “bigotty mouth disease.” Only a few small studies had been carried out, but the media did its amplification trick turning my family WhatsApp into an echo-chamber of suggestions that perhaps I wasn’t just a tetchy feck and I had this thing all along! But I was a tetchy feck, and a sceptic. If only two or three studies had shown correlations in the neurobiology of self-professed misophonia sufferers*, then dozens of studies with negative results would either have never made print or would have been published in low-tier journals that responsibly publish negative results and, for their service to science, go utterly ignored.

No, no. Keeping ear-plugs to hand as a diabetic keeps insulin is merely a writerly quirk. Escaping my house in a robe and slippers because of a ticking extractor fan shows my respect for Edgar Allen Poe. Getting off buses and trams and trains mid-journey and fleeing restaurants mid-meal is mad-hat creative spontaneity! Dreaming about being able to afford soundproofing only to wake up because my partner’s heart is beating uncivilly loudly is … passion? Forcing the orchestra to pause the rehearsal until my laughing fit is under control (a chronically flat pizzicato is all it takes to set me off, weeping) is because we sound either hysterical or intolerable! Besides, all genius-types are prone to such irascibilities. Marcel Proust lined the walls of his bedroom with cork to dampen the noise! … until he developed an allergy to cork. …

So how does having this hypochonhypersensitive ear effect my writing life? What habits have I developed on account of or in response to this relationship with the aural?

I Like the Sound of Orange, Which Rhymes with Nothing

Whenever I teach, I play “background noise” soundtracks during all reading and writing exercises. At first, students think this is weird and even rude and contrived, potentially fascist, and it is … in that it’s non-negotiable. They’ll be less conscious of the silence before their pen finally hits the page, I promise. There is truth in that. (Another truth is that writing begets pen-clicking and knees jiggling beneath desks, chaffing jeans). Carefully modulated ambient noise, I tell them, is scientifically proven to enhance concentration, cognition and creative processes. I don’t cite the one article I know, as it’s from the Journal of Consumer Research, and creativity can be consumed but it cannot be manufactured. I quote the abstract to sound authoritative:

There are 10 million results for “white noise” on YouTube. There’s your quantitative data. Students get used to it—even come to depend on it—after a fortnight, and it helps to build associative muscle-memory, I like to think. I blur the lines between what truths have been peer-reviewed and what notions have taken my fancy. Some student’s chewing chewing gum, which is explicitly banned (there were three rules: “No Phones, No Laptops, No Mastication”). I press my ears so hard my skull becomes a squishy stress ball. I should not be allowed to teach.

White noise, like white light, covers all (hearable) frequencies at once, at a constant power rate per hertz. But, sound connoisseurs and temperamental cretins know that human anatomy hears more sounds in higher frequencies than in lower ones, so actually white noise sounds tinny and high-pitched. (It kilohertz. I’m sorry.)

Pink noise is a bit more tolerable; sounding of heavy rain if you’re standing in it, rather than hearing it muted through a window.

Brown noise dampens the high frequencies to counteract our anatomical bias—inserting that windowpane—so it sounds calm and bass-y. It helps me focus and stay alert. It’s good for poems.

Purple and red noise are pleasant, though they make me more studious than contemplative. Good for journalism.

Blue and yellow noise make me feel a bit freaky, like I’m in a spaceship or a coffin; and sleepy, at last.

Were I writing speculative fiction, or reading Karen Russell, George Saunders, Amelia Gray, Kafka, Kelly Link, I’d play super deep blue noise. But it’s no good for realism, even though Link is good for realism; and yellow is good for Gray.

After a while, orange noise hurts my ears—it strains too much in the temples.

As Jane Austen puts it in Persuasion: “Every body has their taste in noises as well as other matters; and sounds are quite innoxious, or most distressing, by their sort rather than their quantity.” Hear hear. So I choose background soundtracks as neutral and innocuous as possible for my writing students. Good soundtracks have been calibrated to the frequency-spectrum of brown noise, though with a less calm, consistent and more changeable, realistic soundscape. Coffitivity.com is a go-to. Just as I listen to café noises soundtracks in cafés, I play campus undertones in my university classes. Baudrillard, eat your heart out.

A Final Note on Soundtracking: Music

I tend to live in the same set of sounds for however many years it takes me to write a novel. Besides the above. Call it three albums totaling 130 minutes of music. I listen to those three albums on repeat daily for years. Ludicrous and purgatorial? Yes, it is. But it helps. And it’s hard to find lyricless music that doesn’t impose its atmosphere with too much force on the psyche.

This method was recently put to the test, when I had to work on a novel that I’d left aside several years prior and, for the life of me, I couldn’t recall what albums I listened to during that novel’s composition. Bizarre, given how often I’d heard them, but perhaps there had been some wounding effect and I had buried the memory. It took me weeks of reading the novel aloud to remember its voice and tone. When finally I remembered the albums, hey presto! I was able to re-enter the composition properly. To scoot all the way along the novel’s cabin and into its cockpit. It was a huge relief … until I remembered that I was flying a plane / writing a novel.

As if tuning a new, stiff violin string with an oil-slick peg, the sentence slips, gives and comes loose. It is flat. It is too long. Too strict. Too polysyllabic for this or that narrative voice. Too Anglo. Too Latinate. Saxon. Too six of one, half dozen. Too much tongue-clack for the other character. Ample spittle for that protagonist. Is “resonant” too resonant for so mundane a meaning? Is “echoey” too elfin? Is one noun too dull for its flamboyant connotation? By the time I’ve written—and, say, published—a short story of 6,000 words (say, this one), I have read the story aloud 600 times. That is to underestimate. Even this essay—such a skew-whiff, narcissistic, neurotic thing as this—has been orated to an audience of empty chairs and the background “rainy jazz” more times than I’m willing to admit.

Next week I’m flying to London to record the audiobook of Orchid & the Wasp. That they’re letting me narrate it feels something like an April Fool’s trick. For a sceptic, I’m highly persuadable and gullible. Still … I did audition. And I do know the book pretty-well by heart. And I’ll be able to control the amount of susurration on the esses, which reduces my anxiety considerably. And, unlike professional actors, I won’t need to do any homework! I did a school’s worth of homework during the writing process. Weeks listening to dialect videos on YouTube; not for the obvious responsibility and accuracy reasons, but because I can’t write a character unless I hear them fully and specifically and I know how they refer to carbonated drinks. I have to be able to imitate them, to know how their throat expands and their cheeks concertina. What their phone voice is. Whether or not they have safe words. Tomato or tomato. Tornado or Sharknado. This assignment could be a huge, uneditable, immutable mistake. I will blame Carol Ann Duffy.

I told Carol Ann Duffy at a writing festival in New Zealand many years ago that I was working on a character from her bailiwick (though she’s Scottish, she teaches in Manchester, so I meant northern England). I’m a dab hand at accents, I told her. (When I’m a fan of somebody, I become my knobbiest self.) “Go on, then,” she said. “Give us a go.” Lo and behold, I’m doing my best middle-aged male Leeds voice for the British Poet Laureate. She listened, with her chin lifted. “That’s not Leeds,” she said. “That’s Bolton.”

I think it’s fair to say that counts as encouragement, and thus the audiobook culpability should be shared.

“I have long held the opinion that the amount of noise that anyone can bear undisturbed stands in inverse proportion to his mental capacity and therefore be regarded as a pretty fair measure of it.”

Caoilinn Hughes debut novel Orchid & the Wasp is available from Hogarth in July.

The following story by Caoilinn Hughes features in Galway Stories: 2020. Caoilinn Hughes is the author of Orchid & the Wasp, which won the Collyer Bristow Prize 2019. Her short fiction has won an O. Henry Prize and the Moth International Short Story Prize. Her second novel, The Wild Laughter, was published in July and is shortlisted for Novel of the Year and the RTÉ Listener's Choice Award in the Irish Book Awards 2020.

I Grew Up Undocumented: Now is the Time For Action 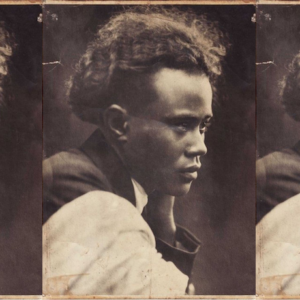