TODAY: In 1992,  Mary Norton, author of The Borrowers series, dies.

It’s that time of year: Emily Temple considers the new generation of great campus novels • Jhumpa Lahiri, Eduardo Halfon, and Ilan Stavans share views of the pandemic as immigrant writers • On William Faulkner’s pride in—and quarrels with—his ancestral legacy • Exploring the gulf between history and national myth in Israel • Nick Flynn on the hard art of teaching your child where you come from • Rev. William J. Barber on the scourge of environmental racism • A poem by Dawn Lundy Martin • Clifford D. Conner looks at the many ways in which corporate money has distorted American science • Ros Anderson on the difficulty of finding a distinct human voice for her AI protagonist • In lockdown, David Farrier rediscovers drawing • The frustrated migrations of Greece, in mythology and life •  Joy Harjo on the diverse, groundbreaking world of Indigenous poetry • David Giffels considers rural addiction and the need for a multitude of voices • Was The Graduate inspired by a Brontë family scandal? • Jason Diamond on the sprawl of suburban culture • Sarah M. Broom looks back at the devastation of New Orleans East, 15 years after Hurricane Katrina • Daniel Torday on The Protocols of the Elders of Zion, 100 years later • Heather O’Neill on reading Virginia Woolf and looking back at her younger selves • Bask in some welcome beauty with the best book covers of August

Five international crime novels you should read this August • Eight dark thrillers with even darker antagonists, from Michael Laurence • Elizabeth Penney on cozy mysteries featuring murder in the midst of festivities • August’s best debut crime and mystery novels • Carl Hiassen on Palm Beach, slithery characters, and Florida crime fiction • Wendy Corsi Staub asks authors how they plan to address the pandemic in their fiction • Sarah Vaughan on why motherhood is a fertile subject for crime fiction • Hannah Dennison fondly recalls the sordid world of 1970s hotels • Why The Sting is still the ultimate grifter movie, from Olivia Rutigliano • S. J. Watson on six novels that could only take place at the seashore

Check out this gorgeous illustrated map of Black-owned bookshops across the country.

"The Language of Cats and Dogs" 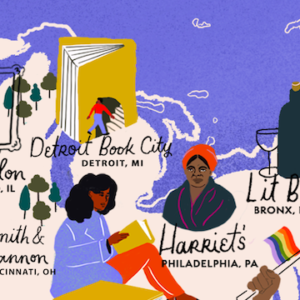 Check out this gorgeous illustrated map of Black-owned bookshops across the country.

Happy Independent Bookstore Day! As part of its guide to Black-owned bookshops in the US, O, The Oprah Magazine created...
© LitHub
Back to top