The citizen’s guide to climate change • Emily St. John Mandel on the narrative possibilities of time travel • Jesymn Ward on discovering the work of Ntozake Shange • Edward Hirsch traces the roots of American poetry • Arundhati Roy on the battle between myth and history • The digital age is destroying us • Considering Kathryn Davis’ meditations on grief •  Where are all the matriarchies in fiction? • On Jeff Bezos’ awkward journey to Hollywood • Emily Van Duyne on teaching as a rape survivor • Sanaë Lemoine on a tumultuous love • On the many (many) ways to die in Shakespeare’s day • Rebecca Scherm on the daily terrors of writing climate fiction • How do you fictionalize technology when it’s constantly changing? • Adrienne Celt on grad school and ambition • What does it mean to understand pain? • Following Henry David Thoreau’s walks • Alan Lee on illustrating The Lord of the Rings • Jendella Benson’s advice for writing about gentrification • Inside the surprising history of Chairman Mao’s love for dance • How has the pandemic changed our perceptions of loneliness? • When airline stewardesses were forced to retire at 32 • Using dictation software to navigate pandemic pain • On fictionalizing the long-suppressed histories of Holland and Indonesia • On the legacies of the transcendentalists • Imagining the aviators who inspired William Faulkner • On the limits of scientific terminology • The pleasure of British historical reality TV shows • Surviving a breakdown by reading nothing but royal biographies • On the erased lives of enslaved women forced to bear their enslavers’ children • When German business tycoons funded Hitler • Did Thomas Edison “disappear” his motion-picture rival? • Chloe Caldwell on the joys and invisibility of stepmotherhood • Lessons from Tacitus 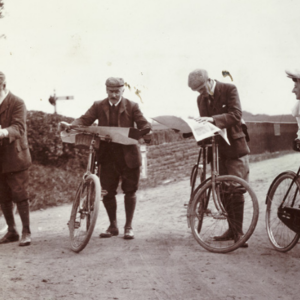 Here's your delightful news for the day: Jon McGregor, author of Lean Fall Stand, decided to see how many independent bookstores...
© LitHub
Back to top