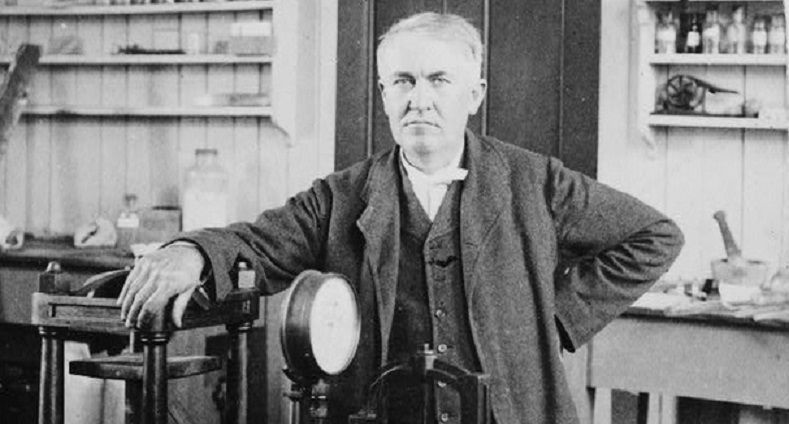 Paul Fischer’s on a Dark Corner of Motion Picture Lore

On Thursday, May 28, the largest headline on the front page of the New York Sun announced in loud, bold letters: “THE KINETOGRAPH. Edison’s Latest and Most Surprising Device—Pure Motion Recorded and Reproduced.” Edison claimed to be able to “reproduce the image of a living, moving, speaking human being, and not only one image but a dozen images together, or forty of them,” using a “small pine box…[with] some wheels and belts near the box, and a workman who had them in charge.”

The Kinetograph was a peep-show device—the pictures viewable through a pinhole in the top of the machine—but Edison predicted it could be adapted so that “a man can sit in his own parlor and see reproduced on screen the forms of the players in an opera produced on a distant stage,” or each devastating blow of a prize fight, or each moment of a president’s speech.

It would all be available to watch on “a big screen. You watch the screen, and see a picture of the stage, full size,” made possible through the use in the camera of “a roll of gelatine film,” as celluloid film was often referred to then.

The article ran one column on the front page, two and a half columns on the first inside sheet. With every passing word, Lizzie’s dread grew. Twenty-five years later, when she put her memories of the time down to paper, she wrote that she knew immediately the machine Edison was describing.

“It was my husband’s invention of moving pictures!”

For 48 hours every newspaper in America was full of praise for Thomas Edison. “Edison’s Newest Wonder,” exclaimed the Evening World in an extra edition on the 28th, “telegraphs 2,400 Photographs per Minute. The Wizard Thomas A. Edison, of Llewellyn Park, waves his wand and the world marvels.” The Pittsburg Dispatch dubbed the Kinetograph “his latest and most wonderful invention.”

The Philadelphia Inquirer, unable to find the right words to describe the inner workings of the machine to its readership, settled on “‘Photos’ by Electricity.” By May 30, comparable praise appeared in newspapers in England and across Europe.

Throughout that weekend, Lizzie, still “much upset,” received word, by cable and in person, from outraged friends. Henry Woolf, a decorator and friend of Louis’s, had seen an early version of Le Prince’s camera years earlier. “I remember seeing the pictures,” he said later, and “I had grasped the manner of working the apparatus enough to know that on reading Edison’s account of the Kinetoscope in the papers of May 1891, that it was an infringement on Le Prince’s machine.”

Mary Borer, who had known the Le Princes in England and now lived in Connecticut, was so “indignant” at seeing Louis’s work being brought out “in Edison’s name” she cut the announcement out of the Sun and sent it immediately to the Jumel Mansion to alert Lizzie.

Inventors toiled away at parallel ideas all the time; Le Prince had been aware of at least two rivals. And yet, with every new reported detail, the similarities between Edison’s Kinetograph and Le Prince’s moving picture apparatus came into sharper focus. Each device could take a great number of photographs per second, sequentially, through a single lens, powered by a hand crank.

Both the Kinetograph and Louis’s camera used strips of celluloid film, and both advanced that film past a single lens using sprockets that pulled it forward intermittently—the teeth clicking into a metal belt, in the case of Louis’s machine, and directly into film perforations, in the case of Edison’s.

What were the odds Edison and Le Prince had conceived of the exact same method of capturing and projecting images, within a year of one another, without any contact?

“My idea was to take a series of instantaneous photographs of motions so rapidly that in the reproduction the photographic representatives become resolved into a pure motion instead of a series of jerks,” Edison explained to a newspaperman. “The kinetograph takes a series of 46 photographs in one second and keeps it up as long as desired. It starts, moves, stops, uncloses the shutter, takes a photograph, closes the shutter and starts on 46 times a second. The result when reproduced is a pure motion.” The successful working of this mechanism—a strip of rollable film exposed intermittently past the camera shutter, fast enough to sustain persistence of vision—was precisely the system Louis had been perfecting in the year before his disappearance.

Other rivals had used glass photographic plates, continuous movement appliances, even rotating contrivances in the shape of a gun’s cylinder. What were the odds Edison and Le Prince had conceived of the exact same method of capturing and projecting images, within a year of one another, without any contact? How could the US Patent Office have permitted Edison’s application for the Kinetograph when Louis held the right to the technology through a patent granted in 1888?

Joseph Whitley, in his long career as an ironmonger and engineer, had patented many innovations of his own, and spoke often, and disdainfully, of how common patent theft had become. Le Prince had admired Edison and even, in the earliest days, considered bringing his idea to the exalted genius for endorsement, as many others had and would continue to do. But Le Prince had grown increasingly secretive as he approached the achievement of his plans.

Lizzie remembered how one day, shortly before Louis had left New York in 1887, she had questioned the need for him to go to England, and her husband had answered “very quietly and gravely that he had heard of ‘queer’ things, and that he might be ‘safer away.’” Was it Edison he had come to fear? Had that fear driven him back to Leeds, an ocean away from Edison’s New Jersey lab, to finish his work?

Edison was currently in court, defending his patent on the incandescent light bulb from competitors he asserted were infringing his rights; indeed, during the end of May, breathless eulogizing of the Kinetograph and rapt descriptions of proceedings in the US circuit court jostled for column inches almost daily. Was Thomas Edison, the Wizard of Menlo Park, a patent pirate himself?

There were accounts from England that William Friese-Greene, a professional photographer from Bristol, had patented and publicly announced a “kinetoscope” device of his own conception as early as February 1890, and that Friese-Greene had written to Edison, enclosing press clippings, for his approval. (Friese-Greene would later marvel at Edison’s claiming that he had come up with the word himself.) Many businessmen accused Edison of intellectual property theft and self-aggrandizement, chief among them Edison’s most vocal rival in the electrical field, George Westinghouse.

It was suspicious, too, that Edison’s final caveat (a form of prepatent) on the Kinetograph had been filed in the dying days of 1890, just weeks after Louis’s disappearance, and that this caveat, after multiple earlier versions in which Edison’s motion picture machine was of an entirely different design, suddenly bore an uncanny closeness to Louis’s own patent.

Lizzie was taken by speculation—but two more events happened to tip her fancy into certainty. One morning that spring, Lizzie had business in southern New Jersey; her appointments fulfilled, she boarded a boat at Atlantic Highlands to return to Manhattan. On the deck, according to her, was Thomas Edison himself, embarked on the same journey. He was hunched in close conversation with another, younger, man, whom Lizzie recognized almost immediately. William Dameron Guthrie, 31, was a patent attorney with the firm of Seward, Blatchford, Griswold, and Da Costa. He was a friend of Jack Whitley’s—and had briefly been Louis’s own patent adviser.

Her husband, on the brink of unveiling a machine that would change the world and make his fortune, had mysteriously disappeared—and then, just months later, Edison had gone public with what looked to be the same exact invention.

The boat reached Manhattan; its passengers stepped off into the downtown streets. Lizzie, at a distance, kept her eye on Edison and Guthrie. “I followed them up Church Street as far as Broadway,” she recorded, which was either their destination or the point at which she lost them. Soon after, Lizzie said, a “connection by marriage” in England by the name of Alfred Pickard apprised her he had “received a visit…from a New York representative of Mr. Edison, who made minute inquiries about Le Prince’s work and disappearance. This was at once followed by the first fan-fare [sic] in the New York papers about ‘The Wizard’s gift to the world’ in May 1891.”

Le Prince had been missing for over eight months, and for eight months Lizzie had been at an impasse, without the slightest clue to his whereabouts, let alone a real lead. In the spring of 1891, when Edison’s Kinetograph was announced to the world, Lizzie suddenly held on to something she hadn’t had since the beginning. Her husband, on the brink of unveiling a machine that would change the world and make his fortune, had mysteriously disappeared—and then, just months later, Edison had gone public with what looked to be the same exact invention. Until then, Louis’s disappearance had been incomprehensible. Now, however, his wife saw coherence: Louis hadn’t vanished, he’d been eliminated.

Lizzie had a suspect—with a motive. 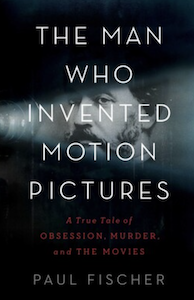 Excerpted from The Man Who Invented Motion Pictures. Used with the permission of the publisher, Simon & Schuster. Copyright © 2022 by Paul Fischer.

Paul Fischer is an author and film producer based in the United Kingdom. His first book, A Kim Jong-Il Production has been translated to date into twelve languages. It was nominated for the Crime Writers’ Association’s Nonfiction Book Award. It was chosen as an Amazon Best of the Year Nonfiction Selection, one of Library Journal’s Top Ten Books of the Year, and one of NPR’s Best Books of The Year. It was also nominated for a Goodreads Choice Award for History & Biography. Paul has also written for the New York Times, Los Angeles Times, and The Independent, amongst others. In addition to writing, he works as a film producer and is an alumni of the Guiding Lights mentorship program. His first feature screenplay, The Body, based on a short film of his conception, was produced by Blumhouse and Hulu in 2018, starring Tom Bateman (Vanity Fair), Rebecca Rittenhouse (The Mindy Project), Aurora Perrineau (Truth or Dare), David Hull (Crazy Ex-Girlfriend), and Ray Santiago (Ash vs. Evil Dead). Photo by Sean Trayner.

Romeo Oriogun on Life as a Poet in Exile from Nigeria 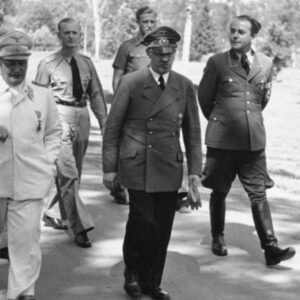 “And there they stand, affectless, like twenty-four calculating machines at the gates of Hell.” –Éric Vuillard,...
© LitHub
Back to top
Loading Comments...