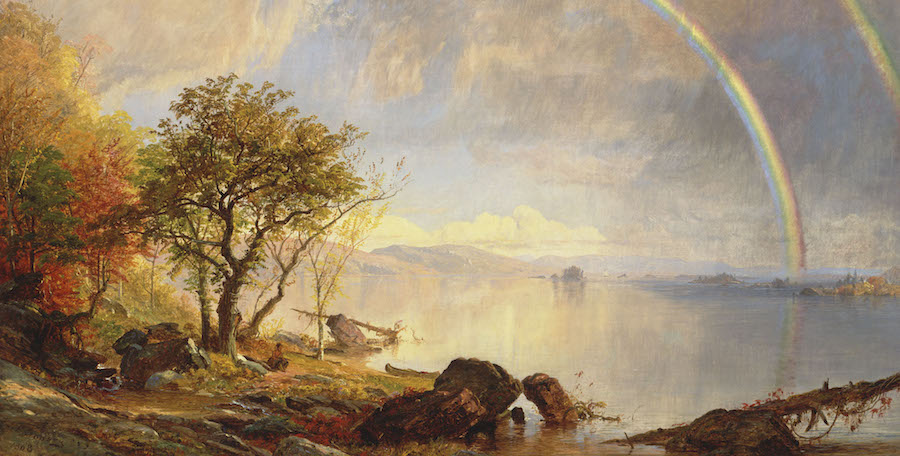 How the Transcendentalists Shaped American Art, Philosophy and Spirituality

Dominic Green on the Legacies of Whitman, Thoreau, Tyndale, and More

November 10, 1856. The poet shares his attic room and bed with his brother the simpleton. Books are piled on the mantelpiece and framed pictures of naked, muscled figures are pasted to the walls—Hercules, Bacchus, a satyr. The visitors smell the unmade bed and the unemptied chamber pot. The house has a parlor, but the poet has led his visitors up two narrow flights, to display his privacy. They are in their Sunday best, and he is in his.

Walt Whitman wears a workingman’s red flannel shirt, cowhide boots, his patent “man-Bloomer”—a pair of baggy, loose trousers like those worn by his friend, the women’s rights advocate Abby Price— and a loose jacket with a Byronic collar to frame his brawny laborer’s neck. Atop this ensemble: a slouched hat, unkempt gray hair and beard, a pair of “cautious yet sagacious” gray eyes, and thick, graying eyebrows whose centers curve upward, as if inquiring as to the effect.

Whitman’s guests are the Concord hermit Henry Thoreau, the Transcendentalist educator Amos Bronson Alcott, and Sarah Tyndale, a women’s rights advocate and friend of Lucretia Mott’s. This trio have come from Plymouth Church, where they heard a sermon by Henry Ward Beecher, whose sister Harriet is the author of Uncle Tom’s Cabin. Alcott thinks Henry Beecher is as much an actor as a preacher, and Thoreau finds him too pagan. This is their second visit to Whitman’s ramshackle fringe of Brooklyn. They came yesterday, but he was not home. Like Flaubert, and Baudelaire too when the money runs out, Whitman lives with his mother. She fed cake to the visitors and exposited proudly on her son the great man.

Alcott visited Whitman for the first time a few weeks ago. With his bent arm for a pillow, Whitman reclined languidly in his Bohemian outfit, admitting “naively” how “slow” and lazy he is. To Alcott, the father of the author of Little Women, Whitman embodies Young America—the loose grouping of reformers, artists, and political journalists who seek to create a national culture, and also a metaphysical ideal. Whitman agrees. “I too, following many and follow’d by many, inaugurate a religion.”

To Alcott, Whitman embodies Young America—the loose grouping of reformers, artists, and political journalists who seek to create a national culture, and also a metaphysical ideal.

Emerson, the first to make the pilgrimage to Whitman, has praised Leaves of Grass as the “most extraordinary piece of wit & wisdom that America has yet contributed.” Thoreau has reservations. He finds Whitman’s “pomes” exhilarating. They speak, Thoreau feels, “more truth than any American or modern I know,” and Whitman may be “the greatest democrat the world has seen.” But Thoreau finds their sensuality “disagreeable” and “strange.”

The Transcendentalists are adept at transcending the body. “If you would obtain insight,” Thoreau advised, “avoid anatomy.” In the woods, Thoreau found a stinkhorn fungus, Phallus impudicus. He took it home, and as he watched it decompose into “fetid, olivaceous, semi-liquid matter,” he wondered how Nature could delight in such “disgusting” creations. Whitman seems to revel in Nature’s obscenity: “It is as if the beasts spoke.” Thoreau hopes that Whitman’s readers will be “pure” enough to read him “without understanding him.”

In five years’ time, Whitman will augment Leaves of Grass with a sequence of poems on “manly love,” named “Calamus,” for another phallic flower. After exhibiting his slovenly den, Whitman takes his guests back downstairs to the parlor. Whitman and Thoreau exchange “cold compliments.” Thoreau notes Whitman’s “coarse nature.” Whitman senses Thoreau’s snobbish “disdain” for ordinary people. Alcott watches as Emerson’s would-be heirs eye each other “like two beasts, each wondering what the other would do.”

In 1842, Whitman, then twenty-­two, heard Emerson deliver his lecture “The Poetry of Our Times” in New York City. Emerson called for a poet who would write the “great American poem on the nature of American things: “our log-rolling, our stumps and their politics, our fisheries, our Negroes and Indians, our boasts and our repudiations.” That poet’s “possessed and conscious intellect” would summon “new energy” by “abandonment to the nature of things.”

“I was simmering, simmering, simmering,” Whitman recalled, “and Emerson brought me to the boil.” Ingesting self-help and lyceum lectures, Whitman wrote a weak novel about temperance. He worked as a schoolteacher, a printer’s typesetter, and a housebuilder and then became a radical journalist and editor. He advocated for women’s rights and abolition, praised the European revolutions of 1848, and called Franklin Pierce a president who “eats dirt and excrement for his daily meals, likes it, and tries to force it on The States.”

The Transcendentalists are adept at transcending the body.

The borders of consciousness and flesh melt as the moral merges with the biological, the species with the universe. Sex is as natural as Mesmer’s electrical fluid, and the sparks of the divine fall where they must. Compassion, love, and human “adhesiveness” are waves in the “measureless ocean of love.” Sex is the democratic liberator of “forbidden voices”: “voices of sexes and lust, voices veil’d and I remove the veil.”

His revolt incubated for years in his notebooks and was born fully formed. In “The Song of Myself,” Whitman introduces a new spiritual type: the comprehensive man who contains all and accepts all. “I resist anything better than my own diversity,” Whitman admits, becoming the first to translate “diversity” from racial science to sexuality, and providing the template for Oscar Wilde’s joke about resisting all temptation apart from temptation. The human essence is not a taint in the blood, but an inner spring of vitality, pure and clean. “Divine I am inside and out, and I make holy whatever I touch or am touch’d from; / The scent of these arm-pits is aroma finer than prayer / This head is more than churches or bibles or creeds.”

The triumphant individual expands to inherit the cosmos. Emerson is his father and Nature his mother. He is the modern heir to the Renaissance uomo universale, with the brutish power of Caliban and the delicate self-love of Narcissus. Nothing human is alien to him because everything is now human, and all that is human is natural—the night soil in the chamber pot, the sweat in the bedsheets, the feces in the president’s mouth, the poet’s fruity armpits. He contains the sacred and the profane as proofs that the universe is finally known, accepted, and mastered.

The old morality is overcome, the New World democracy unleashed.

In Whitman’s America, the free body shapes its own evolution toward a happy ending.

There has never been a civilization healthier than Whitman’s Amer­ica. Democracy is the natural state of the body politic, the gymnasium for “freedom’s athletes,” and faith is the “antiseptic of the soul.” The moral athletes renew their bodies by physical labor, until all are sunburnt and sinewy, prime “naked meat.” Unlike President Pierce, their bowels are “sweet and clean.” All is one healthy flow, as though life is one long water cure. Everywhere, the wholesome toilers haul, lift, dig, and hammer, incarnating “spirituality the translatress… the finale of visible forms.” There is plenty of hard and dangerous manual work, but the only trade union is the fraternity of “manly love.”

Whitman was a consciously American innovator, pragmatic and promiscuous in his mixing of art and commerce. Forerunners like Poe and Emerson showed how the writer must help himself, and Whitman’s years in the print shop and the newspaper office had inculcated the practical virtues. When Whitman took his poems to the Rome brothers’ printshop on the corner of Cranberry and Fulton Streets in Brooklyn, he helped with the typesetting. He explained his greatness in the preface to Leaves of Grass and included a photograph of himself in disheveled working clothes.

Struggling to find a publisher willing to associate itself with Leaves of Grass, he found a distributor in Fowler & Wells, a company that was run by phrenologists and specialized in books on health fads. Then he sent a copy to Emerson. Flattered by Whitman’s unsolicited but “wonderful gift,” Emerson wrote back, saluting Leaves of Grass as the “beginning of a great career.” Whitman bound this private encomium into review copies, advertised it in the New-York Tribune, and placed it in gold letters on the spine of the second edition.

Wheeling in the skies, Whitman eyes the vast scope of “Democracy’s lands.” Far below, the workers are indistinguishable from their tasks, like Ruskin’s medieval urbanites. “See, ploughmen ploughing farms—see, miner digging mines—see, the numberless factories… See, lounging through the shops and fields of the States, me, well-belov’d, close-held by day and night.”

As Hegel suspected and Emerson hopes, universal truth will speak in an American accent.

Whitman has great power, Emerson says, and “great power makes us happy.” The future is a golden age, not a gilded one. The endless swarms of alert, turbulent, and good-natured citizens in Whitman’s America are not Carlyle’s mites in cheese. Their material power is a spiritual power, and each production is a proof of individual “diversity.” Man not only retains his soul amid the machines and crowds; he discovers and develops it. In Whitman’s America, the free body shapes its own evolution toward a happy ending. As Hegel suspected and Emerson hopes, universal truth will speak in an American accent.

On the morning after the prayers and roast geese of Christmas 1859, Britain’s ruling class sat down to breakfast, opened The Times, and read Thomas Henry Huxley’s review of Origin of Species.

Mr. Darwin, Huxley explained, already stood in the “front ranks” of British philosophers, but that did not preclude his remaining a sensible Englishman. Any sheep farmer could explain artificial selection. Darwin merely applied its “familiar but well-nigh forgotten facts” to the wild world. His hypothesis was perfectly simple and comprehensible: “There is in nature some power which takes the place of man.” Then Huxley led the reader to Darwin’s tableau of slaughter.

“Who, for instance, has duly reflected upon all the consequences of the marvelous struggle for existence which is daily and hourly going on among living beings? Not only does every animal live at the expense of some other animal or plant, but the very plants are at war.” The seeds in the ground robbed each other of light and water. Animals dismembered each other for food. Only “robbers” and killers survived. 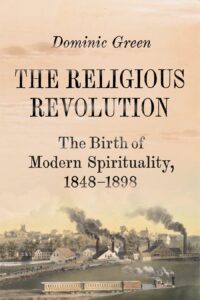 Excerpted from The Religious Revolution: The Birth of Modern Spirituality, 1848-1898 by Dominic Green. Copyright © 2022. Available from Farrar, Straus and Giroux, an imprint of Macmillan.

Dominic Green, PhD, FRHistS is a critic, historian and the deputy editor of The Spectator’s US edition. He writes widely on the arts and current affairs, and contributes regularly to The Wall Street Journal and the New Criterion. He is the author of the books Three Empires of the Nile, Armies of God, Benny Green: Words and Music, and The Double Life of Doctor Lopez. He lives in Cambridge, MA.

Arundhati Roy on Religious Nationalism, Dissent, and the Battle Between Myth and History 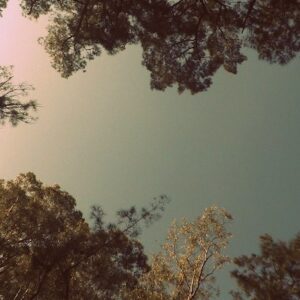 Carl Linnaeus invented our taxonomy system. Like God in a lab coat, he used the system to classify and name species from...
© LitHub
Back to top
Loading Comments...