TODAY: In 1713, French philosopher, art critic, and writer, best known for serving as co-founder, chief editor, and contributor to the Encyclopédie, Denis Diderot, is born.

The end of the decade is nigh, and so our reckoning continues with the ten best debut novels of the 2010s • Karl Ove Knausgaard has some thoughts on one of Norway’s great writers • Madeleine Watts on Patrick White, Australia’s great unread novelist • Jeanette Winterson and Mark O’Connell discuss the future of humanity in a tech-dominated world • Cornel West on the revolutionary Foundry Theater, “a uniquely American movement against the dominant forces in America” • Mieko Kawakami on

the women characters of Haruki Murakami • On Virginia Woolf, Anne Carson, and the use of form to investigate truth and death • Anthony Doerr on the pleasure of throwing out all the rules when writing a short story • On the irreconcilable temptations of Anne Carson • Felicia Day on writer’s block, weirdness, and women with swords • Why give a rapist a voice? Jeannie Vanasco on writing the character of her abuser • Steve Luxenberg on journalism versus storytelling • Are civilization and income inequality inextricably intertwined? • On Monsieur Bovary, one of literature’s most necessary characters • Lev Grossman on the history of cartography in sci fi, fantasy, and more • Running a bookstore aboard a 100-year-old Dutch barge never gets boring (though it sometimes gets wet) • With Jenny, Sigrid Undset told a cautionary tale of a doomed flâneuse • Feeling lucky? Perhaps this brief history of gambling with dice will change your mind • On the courage and complexity of Olga Tokarczuk • On Emma Tenayuca—one of the great unsung heroes of the American labor movement—and the San Antonio pecan shellers strike of 1938 • Can fiction teach AI to feel? • Letters from a young artist trying to make it in New York: when Jerome Robbins, dance icon, could barely land an audition • A poem by Javier Zamora from the new issue of Freeman’s • The secret to shopping in used bookstores, revealed • All hail the mighty hashtag • Bill Mullen on James Baldwin’s last two unfinished works • Eileen Pollack considers the rage of the angry young men on campus and our responsibility toward them • On the congressional climate change committee that went toe-to-toe with the Koch Brothers • Jonathan Safran Foer on humanity’s struggle with apathy bias • On Ann Petry, the author who didn’t care to be remembered • Julia Alvarez on the 2019 Border of Lights Virtual Vigil

Toni Morrison’s Song of Solomon, Ralph Ellison’s Invisible Man, John Williams’ Stoner, and more rapid-fire book recs from Jamel Brinkley • Memoirs of an Ex-Prom Queen author Alix Kates Shulman recommends five books that made her a feminist, from To the Lighthouse to Their Eyes Were Watching God •

To celebrate the release of her new novel, here’s a reader’s guide to becoming obsessed with Jeanette Winterson • A haunted Ivy League campus, a plucky interstellar janitor, and a group of intrepid space nuns all feature in October’s Best Sci-Fi and Fantasy Books • New releases from Ben Lerner, Jeanette Winterson, Tegan & Sara, and Rachel Maddow all feature among the Best Reviewed Books of the Week

From seaside amusement parks, to Scandinavian trolls, 10 books you should read this October • Tara Laskowski on grief, longing, and ghost stories • Michael Nava shows us how a private eye novel can be the perfect metaphor for being gay in the world • Shaun Hamill grapples with the legacy of H.P. Lovecraft • Rene Denfeld on escaping the Green River Killer • The best opening paragraphs of Graham Greene • “Every age has its own set of fears.” Stephen Chbosky talks horror, creativity, and imaginary friends • Peter Steiner makes the case for Kafka as crime writer • Akanksha Singh discusses the new documentary about Michelle Carter • Kira Peikoff on how fiction can get us talking about issues that matter

The Booksellers is a fascinating look into the world of rare book dealers. 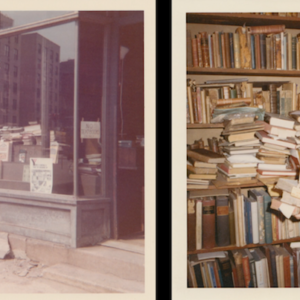 The Booksellers is a fascinating look into the world of rare book dealers.

First editions, signed or inscribed copies, incunabula, manuscripts, and artists’ books . . . the list goes on. Bibliophiles...
© LitHub
Back to top