Jacek Dehnel Considers the Work of the Great Polish Novelist

I won’t hide the fact that I regard Olga Tokarczuk as the greatest writer working in my native language today.

Nor am I alone in my admiration: at last the world is starting to appreciate the greatness of her writing. Last year she won the Man Booker International award for her novel Flights, the Prix Michalski for The Books of Jacob, the recently published English translation of her novel Drive Your Plow Over the Bones of the Dead has been longlisted for the National Book Award, and its film adaptation, Spoor, directed by Agnieszka Holland, won a Silver Bear at the Berlin Film Festival. More and more translations are appearing on bestseller lists around the world, as well as being listed for and winning prizes in Great Britain, Sweden, and the United States.

It’s part of an important process, the patron of which could be the title character from The Books of Jacob, who comes from the ill-defined, marshy frontiers of Europe, from lands regarded with indifference, if not superiority, like most things that are poorly known or entirely unfamiliar. A year ago, when Antonia Lloyd-Jones, translator of several of Olga Tokarczuk’s books, among others, received the Transatlantyk award, Stanley Bill, the head of Polish studies at Cambridge University, said in his commendation:

We know that the world of literature is not fair, and there’s no equality within it…  literature thrives mainly on translations from certain languages in particular, certain hegemonic cultures…. such as French, German, Russian and American, rather than translations of literature that, to be frank, is semi-marginal. … In this context the work of this great translator of Polish literature into English, in other words a translator of semi-marginal literature… into a language of the so-called centre, has a dimension that is not just political but also ethical. It is the work of someone who wants the invisible to become visible, in the deep conviction that the invisible is necessary, not just because it is valuable in itself, but also because it has something essential to say.

For years, thanks to their incredible force and wisdom, but also their lyricism and sense of humor, Olga Tokarczuk’s books have built bridges between the safe and affluent heart of the Western world and the unsafe, unfamiliar margins, the literatures of the “lesser gods.”

Rather than focus on Drive Your Plow Over the Bones of the Dead, the frenetic eco-crime novel already released in the United States, well reviewed and discussed, I’d like to present Tokarczuk’s opus magnum, which will be available in English in 2021 in Jennifer Croft’s translation. Its full title is: The Books of Jacob, or: a fantastic journey over seven borders, five languages and three major religions, not counting minor sects, told by the dead, supplemented by the Author with CONJECTURAL EMENDATION drawn from a range of Books as well as aided by imagination, the which the greatest natural gift of any Person.

Drawing on tales of the 18th-century mystic and religious reformer Jacob Frank, who dodged his way between the wealthy and the needy of this world, Olga Tokarczuk has created a monumental, nearly thousand-page historical epic of events long past and forgotten, but also a universal and timely story.

Universal, because she has summoned into being a whole crowd of memorable, vivid characters, who eagerly recount their own minor fortunes and thus contribute to the entire wealth of the novel. So here we have: an enigmatic prophet; his wife and his daughter; the faithful chronicler of the sect; an old woman who is determined to live forever by means of cabbalistic magic; a bishop who lives and breathes politics; a born troublemaker who has crowned himself king of the Greek islands; his cousin, a grande dame with some rather unusual habits; her loyal lady-in-waiting who is also a poet; a provincial priest who is in love with the lady-in-waiting and who is writing his own encyclopaedia; along with a wide range of members of the sect, men, women and children, old and young, beautiful and ugly, stubborn and submissive. As she introduces these historical characters, Tokarczuk reveals that side of them that’s been kept hidden from the world, and when she goes beyond the facts registered by historians, she gives a voice to the people who didn’t have one: the maltreated, those who disappeared without trace, huddled in the margins of recorded history. This is life set within those times and places, and yet, thanks to the mastery of Tokarczuk, it tells us a lot about other times and places too.

In this age of fake news and propaganda, the subtlety and psychological insight with which Olga Tokarczuk portrays individual characters, societies and even entire nations and epochs, is an exercise in understanding.

But what makes this story timely? Just like the protagonists of The Books of Jacob, we are living in an era of change. The old order, which seemed so firmly fixed, is shaking in its foundations. Jacob Frank was born in 1726, when life in the eastern borderlands of the Polish-Lithuanian Commonwealth had been relatively unchanged for hundreds of years: in the countryside the peasants sowed and reaped their crops, while the gentry attended parliamentary sessions in the capital, hunted in the forests or went out to war; from time to time armies marched across the plains, killing, raping, pillaging and taking captives into slavery, while famine and pestilence followed in their wake.

When Frank died in 1791, the Encyclopédie was forty years old, the steam engine almost thirty, and the United States fifteen; in France and Poland the Enlightenment-inspired constitutions received praised, and the ashes of Voltaire were being laid to rest in the Panthéon. Amid the pains of the French Revolution and the Napoleonic wars, the 19th century arrived just as mysterious, unexpected and incomprehensible for the people of the time as the 21st century was for us in 1991, when communism and the Soviet Union collapsed, and nobody had yet heard of the Internet.

When a snake changes its skin, its shape remains unaltered—but that same shape must now be embraced by new tissues. Similarly, at these moments in history, the shape of the world is enveloped by new ideas, terms and visions; alongside Napoleon, Goethe, Monsieur Guillotin and others, Jacob Frank was one of those who were to sew a new skin for the world. But let’s not be deceived—the extraordinary tale of this charismatic man, and of the people who were drawn to him, is a repetition of ancient ideas that would recur in generations to follow, all the way up to the present era.

No good deed goes unpunished. So it was in this case too. Tokarczuk’s detailed analysis of a forgotten episode in the history of Poland—as expressed in both the book and in the interviews she gave around its publication, in which she broke down the monolith of the nation’s mythology—led to a huge backlash. Not only did common citizens hurl abuse and threaten violence and death, but so too did journalists and politicians; a senator from the ruling party went so far as to demanded she be stripped of her honorary citizenship of the town of Nowa Ruda. Tokarczuk ended up on an informal list of authors who shouldn’t be promoted abroad, and the Polish Minister of Culture said in an interview that she was one those authors read by young filmmakers, but whom they shouldn’t read, because “they won’t get far.”

But The Books of Jacob is not in the least, as one might expect from the reactions of these politicians, a simple, “worthy” tales to be harnessed for a political scheme or purpose. Quite the opposite. The novel’s protagonists, starting with Frank himself, become embroiled in complicated, ambivalent situations and conflicts. The prophet who propagates liberation from oppression, the emancipation of women and free love, also becomes a source of sexual slavery and a cruel despot. The provincial priest, composing his anachronistic, absurd encyclopedia, in which the entry for “Horse” reads, “The horse is as everyone sees it,” proves to be the tenderest writer of love letters, and his bashful, modest affection is one of the most moving features of the novel. By twisting this quote, one could say that in The Books of Jacob no one is as anyone sees them. Nor is history as we see it.

In writing The Books of Jacob, the winner of this year’s Jan Michalski prize has referred to mystical, cabbalistic traditions as well as to historical works to create and people a complete, independent world that remains with us long after we’ve finished reading about it. But I think it will stay with its readers in another sense too.

As Italo Calvino put it, “a classic is a book that has never finished saying what it has to say.” Considering its extraordinary richness, The Books of Jacob has almost infinite potential for re-reading and creative exploration, thanks to which I’m sure that, generation after generation, we shall return to it, finding answers in it to questions we are not yet capable of asking today.

Jacek Dehnel is a poet, writer and translator from English (Philip Larkin, George Szirtes, W.H. Auden) and Russian (Osip Mandelstam) into Polish. Dehnel has also translated songs written to music by Astor Piazzola. He was born on 1st May 1980 in Gdańsk. 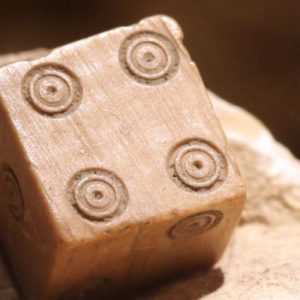 For millennia, humanity’s wish to predict the future manifested itself as innumerable methods for divination, oracular...
© LitHub
Back to top