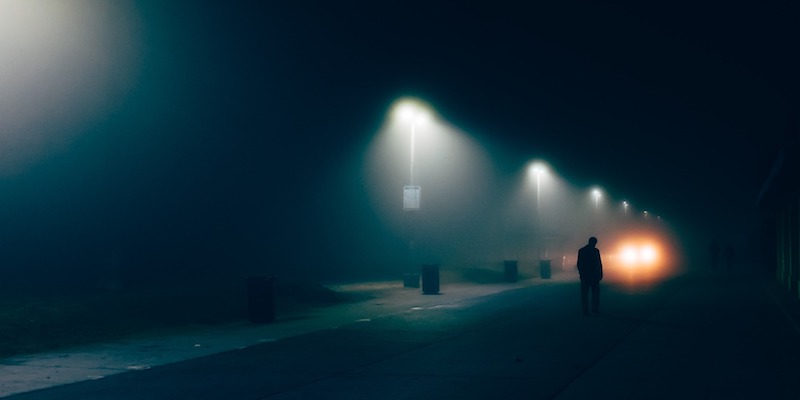 Jeannie Vanasco on Writing the Character of Her Abuser

I tried to hate him, thought I should hate him, but I didn’t hate him—and I wanted to understand why. Throughout high school and into college, we’d been close friends. Then, at a small party during winter break of sophomore year, he carried me, passed out, into his basement room and raped me.

The next day, or maybe a few days later, he apologized. I said it was okay. I wanted us to be okay. We faked our friendship a few more times, talking around—but never about—what happened. And then we stopped talking. Over the years, I’d hear about him—how he’d dropped out of college, moved back in with his parents, started seeing a therapist, became a mechanic. I didn’t wish him a bad life, but I can’t say I cared either way. Maybe I hated him and didn’t know it. So in January of 2018, 14 years after our friendship ended, I started to write about it for a project that would become a memoir.

I could easily list my favorite memories of us: battling an alien race from our computers at 2 am while gulping Mountain Dew and complaining about our conservative government teacher; sharing a cafeteria table, speaking only in lines from Office Space and The Simpsons; trying to act brave in a supposedly haunted forest and then jumping at the sound of twigs breaking; talking on the phone for several hours, several times a week, in the months after my dad died.

To describe my rape with emotional accuracy beyond I felt betrayed and sad and confused (and angry?), I tried to avoid rendering this former friend as two-dimensional—because that’s not how I’d viewed him. I wanted to understand what he’d been thinking; to know how someone I’d thought of as such a good person could do what he did. This meant I’d need to talk with him, interrogate him, and hopefully confirm that he felt terrible—because if he did feel terrible, then our friendship had mattered to him. (Though if it had mattered, why did he rape me?) I didn’t want the specifics of my experience transformed into some accepted theory in sociology or psychology. I wanted his explanation.

But I didn’t know if I should, or even could, interview him. Would he consent? Would it matter? Should it matter? Why did I even think his voice mattered? He raped me when we were 19 years old. We were now in our thirties. Did he even think about it anymore? I could say that I wanted to hurt him by reminding him of what he did, but more than that—and this part I hate to admit—I wanted to hear his voice. I missed our friendship, and the memoir was an excuse to talk to him again.

I expect some readers will oppose my book on principle: Why give a rapist a voice?

But the writer and feminist in me questioned the ethics, especially when it came to characterization. I wondered how much empathy I could, or should, invest in his character, and to what degree his character could be complex on the page. I worried that empathy or complexity—or just the act of including his words, by way of transcribed interviews—could sound like exoneration or excuse. I thought about the ways we’re advised not to give attention to those with problematic viewpoints. I expect some readers will oppose my book on principle: Why give a rapist a voice?

Here’s one reason: if readers consume only stereotypes of rapists, readers risk ignoring the fact that some guy in an Elizabeth Warren shirt could have raped someone, or would rape someone if given the chance. My former friend didn’t match the dominant cultural perception of a “standard” rapist. He didn’t resemble somebody you’d see listed in movie credits as Stranger in the Bushes or Drunk Frat Boy 1. He’d been a teenage progressive. (Though back then, any guy who didn’t rank girls on a scale of one to ten seemed progressive.) I had never expected him to do what he did.

As a writer, I’m interested in exploring contradictions and assumptions. And while I may be a memoirist, I want to convince the reader that my characters are real—without depending on the “memoir” label. According to E.M. Forster in Aspects of the Novel, a character—to seem real, or believable—needs to be “capable of surprising in a convincing way.”

And my former friend did shock me “in a convincing way.” I’d believed we were friends, and that’s why the rape seemed so unbelievable while it happened—yet it’s also why, from a craft perspective, his character on the page could be believable. As someone who’d been raped, I didn’t know how I felt about that, which seemed all the more reason to explore it in writing. It also seemed all the more reason to interview him.

When he agreed to answer my questions, I wasn’t surprised. I remembered the good friend he’d been before he raped me, and I wanted to trust him again, even though I knew I shouldn’t. But to demonstrate to readers why I felt so much internal conflict, I’d need to reflect on the friendship. So I thought of him as three characters: the close high school friend of five years; the college sophomore who carried me, passed-out, into his basement room and raped me; and the repentant 34-year-old who agreed to be interviewed for my memoir, saying, “It’s the least I can do.”

I began interviewing him by way of phone calls and emails. “I’m interested in writing about us,” I said. “I want to understand, I want to believe, that it’s possible to be a good person, a really good person, who makes a mistake.” Grateful that he’d consented, I started to process anything he said as useful to the book—and this is where the greatest risk of exoneration entered. But when I shared the phone transcripts with my friends, they found him obnoxious. They viewed him as a rapist. I viewed him as a character developing on the page.

Crafting his character felt methodical, meditative, safe—much safer than my memories of him that night. When he talked about his thoughts and feelings surrounding the rape, I told myself the rapist was an entirely different character from the one I was interviewing. That made it possible for me to listen. But I still felt like I was 19—as if my character was stuck there, and still telling him it was okay, that I was okay, that everything would be okay. I’d been so focused on him as a character, I forgot to think about myself. At most, I felt like two characters: the teenage girl who trusted him, and then the woman who stopped trusting men. I still wonder when meeting a man, any man, Has this guy sexually assaulted someone?

When my former friend said the rape changed the narrative he could tell about himself—that he could no longer consider himself one of the good guys—I defended him to him, told him that I was certain he was still a good person. It’s embarrassing how many times I tried to comfort him: “I hope this is somewhat helpful for you to talk about” and “I didn’t want to be hurtful” and “I hope you know that I don’t hate you” and “I hope it’s helpful for you to know that I believe you’re a good guy” and “If it helps you to know” and “It was this one night.” I didn’t realize I did that so much. I even defended him to my friends. But the more I talked with my friends, the more I suspected that there was something wrong with me. They’d point out instances in the phone transcripts when he was being manipulative or evasive.

I remembered something else E.M. Forster said of character: “If it does not convince, it is flat pretending to be round.” My former friend had convinced me that he felt remorse, but he hadn’t convinced my friends. I questioned whether he was simply pretending to be repentant, and I simply couldn’t, or didn’t want to, see it. After all, he knew he was a character in my book. How could there not be some degree of performance involved?

Of course there was a deeply personal dimension to this craft issue: I was trying to determine—and was hoping—that he’d once been a real friend, or at least a convincing one. Otherwise, I’d misjudged his character from the moment we met as high school freshmen. And that connected to my fears and guilt after that night: Should I have seen it coming?

I was still finding ways to blame myself.

Eventually, there came a point when I needed to decide whether or not to meet him in person. We’re taught that a conventional story climax is where everything collides—the characters and their understanding of themselves and each other, the meaning of their conflict and their lives, the meaning of the action. While I resist conventional forms, I’ve internalized the most elemental structure—exposition, rising action, climax, falling action, denouement—the same way I’ve internalized the ways women are expected to behave (a realization I didn’t fully register until writing this book).

If the story’s climax was to be our in-person interview, then I already suspected the meaning: that misogyny had shaped my need for validation from men, even the man who betrayed me. Interviewing him now seemed pointless.

I considered reflecting on why I wouldn’t visit him, wouldn’t see him in person. Ignoring him—forgetting about him, letting him disappear from the project—seemed like the more feminist act. I wanted to make him stop mattering. After all, what more could he give me, except maybe more scenes for the book? At that point, I felt certain I was using him. And I felt guilty about that. However, I had told him, all along, that I was writing a book about what he did, and I had made a continued effort to understand his own emotional landscape. And now I was tired of it. Discussing this with my female friends, I became increasingly interested in their voices and my own.

This may disappoint some readers, but I still met with him. I missed the friend he’d once been. But instead of thinking (too much) about what he could tell me—because really, what excuse was there?—I reframed my project by asking what I wanted from my conversations.

The answer includes not just me, but my readers. I want to invite them to think about how we interpret somebody else’s story of sexual assault. I want them to understand that #MeToo is big enough and sturdy enough to hold different points of view about how to end this problem. I want to know how they project their concerns or preoccupations onto my character.

I want to have this conversation. 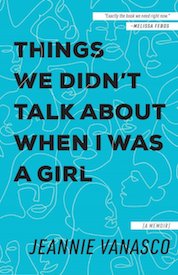 Things We Didn’t Talk About When I Was a Girl is out now via Tin House.

Jeannie Vanasco is the author of the memoirs Things We Didn't Talk About When I Was a Girl (2019) and The Glass Eye (2017). Vanasco's writing has appeared in The Believer, The New York Times​, the Times Literary Supplement, and elsewhere. Born and raised in Sandusky, Ohio, she now lives in Baltimore and is an assistant professor of English at Towson University. 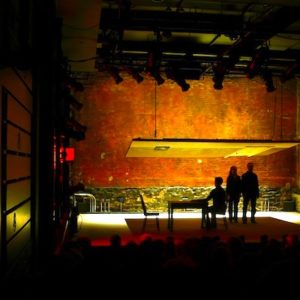 The Foundry Theatre—founded, co-founded, and forever re-founded by the incomparable Melanie Joseph—is the great exemplar...
© LitHub
Back to top
Loading Comments...