He who dies with the most toys wins.
–Malcolm Forbes

The more we understand what human life was like before agriculture, the more civilization looks like a pyramid scheme. Disparities of wealth and power were among the first things to emerge when people settled into villages and towns. Someone had to make decisions about who got how much of what, and when. Someone had to organize the sowing and the reaping, the protection and trading of land and livestock. Once wealth emerged, so did an elite class that was naturally tempted to benefit further from their privileged position.

When similar situations arise in foraging societies—when a large animal is killed, for example—we’ve seen how formal codes of behavior kick in to prevent inequities in the distribution of the windfall. Among bands of a few dozen foragers who all know each other intimately, cheating is quickly detected and discouraged—initially with lighthearted humor, but with the serious threat of more severe repercussions if a light ribbing proves ineffective. Once human communities grew beyond the point where every individual had a direct relationship with everyone else, something fascinating and terrible happened: other people became abstractions. Perhaps Joseph Stalin was thinking along these lines when he said, “one death is a tragedy; a million is a statistic.”

When the quantity of human beings rises to the point where it’s no longer possible to picture the faces of those who are affected by our decisions, innate human compassion is often overwhelmed by other concerns. Politicians who would unthinkingly jump into a river to save a drowning child have no qualms approving policies that leave millions of impoverished kids floundering without basic health care or school lunches. Humans seem to be two different creatures when we compare how we function in small-scale versus large-scale societies. Grasshoppers and locusts.

Wealth disparities unimaginable to foragers are common in the modern world. In the United States, wealth distribution hasn’t been this out of whack since the so-called “Roaring 20s.” In 2012, according to research compiled by French economist Thomas Piketty and his colleagues, the top one percent of households in the US took 22.5 percent of total income, the highest proportion since 1928. In the 1950s, an American CEO could expect to be paid about 20 times more than a typical worker at his firm. Today, the ratio is more than ten times that—over two hundred to one.

The more we understand what life was like before agriculture, the more civilization looks like a pyramid scheme.

And some CEOs make that kind of ratio look downright Marxist. In 2011, Apple’s Tim Cook was paid $378,000,000 in salary, stock, and other benefits—6,258 times the wage of the average employee at Apple. The richest 85 people in the world control more wealth than the poorest half of the planet’s population. Let that sink in for a moment. Eighty-five human beings who fart in bed just like you and me control as much wealth as 3.5 billion other people—many of whom live in desperate poverty.

Piketty, who is “arguably the world’s leading expert on income and wealth inequality,” according to Nobel laureate Paul Krugman, has concluded that income inequality in the United States today is “probably higher than in any other society at any time in the past, anywhere in the world.” Such disparities of wealth are not just inhumane, they are inhuman, offending our innate predisposition for fairness.

When three Tupinambá natives were taken to France from Brazil in the 16th century, the essayist Montaigne was present at their visit with King Charles IX. When the natives were asked what they found most peculiar about the European way of life, Montaigne recounts, “They had observed, that there were among us men full and crammed with all manner of commodities, while, in the meantime, [others] were begging at their doors, lean, and half-starved with hunger and poverty; and they thought it strange that these necessitous [people] were able to suffer so great an inequality and injustice, and that they did not take the others by the throats, or set fire to their houses.”

Of course, sometimes poorer people do rise up and set fire to the houses of the rich, but things soon settle into the same pattern of a few elites profiting from the labor of the unorganized masses, yet again. Meet the new boss, same as the old boss. Given the recurrent pattern, it’s not surprising that many have concluded that this state of affairs is simply the result of human nature—or of nature itself. Many of the great robber-barons of the 20th century were fond of twisting Darwin’s theories to imply that their wealth was simply the logical result of their innately superior “fitness,” and was therefore as natural and inevitable as any other form of predation upon the weak by the strong. In his essay “Gospel of Wealth,” for example, Andrew Carnegie argued that while this “natural law” leads to great suffering among the poor,

it ensures the survival of the fittest in every department. . . .We accept and welcome, therefore, as conditions to which we must accommodate ourselves, great inequality of environment, the concentration of business, industrial and commercial, in the hands of a few, and the law of competition between these, as being not only beneficial, but essential for the future progress of the race.

But while Darwin believed economic inequality to be a necessary first step in the development of civilization, he knew that material inequality wasn’t present in many of the societies he’d visited in his travels, and that such inequality must, therefore, be something more complicated than a straightforward expression of human nature. Darwin’s observations have been confirmed by contemporary researchers. Gowdy concludes that “all the assumptions economists make about economic man are absent in [foraging] societies. People in immediate-return societies are not acquisitive, self-centered cost-benefit calculators. In these societies, it can be most clearly seen that economic man as a universal human type is a fiction.”

While Darwin believed economic inequality to be a necessary first step in the development of civilization, he knew that material inequality wasn’t present in many of the societies he’d visited in his travels.

The more we learn about foragers, the clearer it becomes that their lives are more approximate expressions of human nature than ours are, in that modern market capitalism requires an array of subversions of our natural behavior. “The view of human nature embedded in Western economic theory is an anomaly in human history,” Gowdy concludes. “The hunter-gatherer represents ‘uneconomic man.’”

At an anthropology conference in 1966 called “Man the Hunter,” Marshall Sahlins presented research that posed the first substantive modern-day challenge to the Hobbesian paradigm of prehistoric life. In a symposium called “The Original Affluent Society,” Sahlins introduced many of the ideas I’ve been arguing in these pages. A few years later, he articulated his thesis in more detail in a book called Stone Age Economics, where he wrote, “The world’s most primitive people have few possessions, but they are not poor. Poverty is not a certain small amount of goods, nor is it a relation between means and ends; above all it is a relation between people. Poverty,” Sahlins declared, “is a social status. As such it is the invention of civilization.” 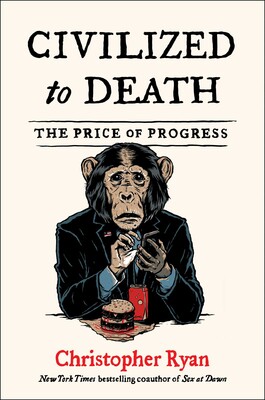 Christopher Ryan's work has been featured on MSNBC, Fox News, CNN, and NPR, and in The New York Times, The Times of London, Playboy, The Washington Post, Time, Newsweek, The Atlantic, Outside, El Pais, La Vanguardia, Salon, and many other places. A featured speaker from TED to The Festival of Dangerous Ideas at the Sydney Opera House to the Einstein Forum in Pottsdam, Germany, Ryan has consulted at various hospitals in Spain, provided expert testimony in a Canadian constitutional hearing, and appeared in over a dozen documentary films. He is the author of Civilized to Death and the coauthor of the New York Times bestseller Sex at Dawn. 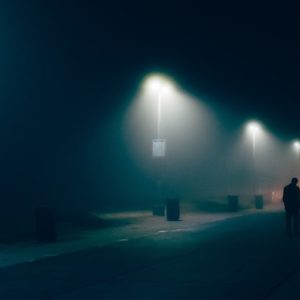 I tried to hate him, thought I should hate him, but I didn’t hate him—and I wanted to understand why. Throughout high...
© LitHub
Back to top