More in our Best of the Decade: The best essay collections of the decade: in which we essay an impossible task • John Edgar Wideman on the impassable divides of the prison visiting room • Eclipsed by the racial shadow of Shakespeare’s Othello: Aatif Rashad on Edward Said, Ayad Akhtar, and depictions of violent brown men • Almost lost arts: here’s what traditional papermaking looks like in 2019 • Paul Theroux on the Day of the Dead • Jon Krakauer on the incredible career of mountaineer Fred Beckey • Andrea Long Chu on Valerie Solanas and modern trans identity • Lessons in gardening from Emily Dickinson • Albert Camus on the responsibility of the artist • Charlie Tyson on the philosophical implications of a world with less work • There’s no such thing as a stupid question, but here are a bunch very strange ones, courtesy of the infinitely patient staff of the New York Public Library • Lydia Pyne on one of the great art criminals of all time • If you think there’s a lot of trash on Earth, we regret to inform you that humans have managed to float 6,000 tons of junk into outer space • Mónica Ramón Ríos and Carlos Labbé on the protests in Chile • Here’s the cultural encyclopedia of mushrooms that we need right now

• Ada Deer on her mother’s fight for tribal sovereignty in the 1960s • On the fine line between self-preservation and self-deception • Cinelle Barnes on raising a brown girl who believes she can be a writer • On the metaphysical terror of the mask-wearing murderer • Ruth Madievsky on the creepy dissonance of reading Trick Mirror in a “self-care” book club • Kevin Wilson on learning pronunciation from Seinfeld, and pretending he’s read the classics • Here are five Halloween audiobooks to help you drown out the doorbell • Mira Jacob, Maile Meloy, Emily Raboteau, and Diana Abu-Jaber discuss comfort food, dream dinner parties, and more • Swimming through writer’s block at an Icelandic public pool • André Aciman on writing his way back to his famous lovers • Ahmet Atlan, the imprisoned Turkish dissident, on the freedom of his mind • A century before Springsteen, Stephen Crane chronicled Asbury Park • The Lit Hub staff’s favorite stories of the month

Support your spouse: Percy Shelley’s review of Mary Shelley’s Frankenstein • Miriam Toews’ Women Talking, Valeria Luiselli’s Tell Me How It Ends, Zora Neale Hurston’s Their Eyes Were Watching God, and more rapid fire book recs from R.O. Kwon • Suicide Woods author Benjamin Percy recommends five tales of suspense and horror that influence his work, from Frankenstein to The Haunting of Hill House • From Carmen Maria Machado to the Astro Poets, check out these 9 witchy new books • Prince’s autobiography, a new novel from Kevin Wilson, and Tom Brokaw’s reflections on the fall of Richard Nixon all feature among the Best Reviewed Books of the Week

“The genre has never been more exciting or vibrant.” Nominees for the Anthony Awards weigh in on the state of the crime novel • Emily Stein recommends all the spooky podcasts to listen to this Halloweekend • Abigail Tarttelin on 7 crime tropes we really could do without • Zach Vasquez looks at 20 essential films that blur the lines between horror and noir • Erica Wright highly recommends growing up in a haunted house • From Sue Grafton to Attica Locke, a look back at three decades of Anthony Award winners • Everything you need to know about Watchmen, which is totally a crime show • Jake Hinkson on the literary roots of backcountry noir • Human marionettes, frogs, and the color black: behold, October’s best book covers • Janet Roger on The Big Sleep at 80

Sure, why not: Jonathan Safran Foer and Stella McCartney created a capsule collection. 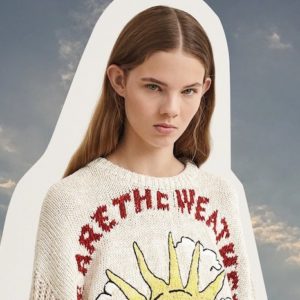 Sure, why not: Jonathan Safran Foer and Stella McCartney created a capsule collection.

Here's a cursed lede: if you have an extra $530, you can buy a Stella McCartney x Jonathan Safran Foer "We Are the Weather"...
© LitHub
Back to top