Milkweed, Hollyhock, and a Little Bit of Color

Every garden is anchored. It is tied to place—the lay of the land, the composition of the soil. At The Homestead and The Evergreens—the two homes that now comprise the Emily Dickinson Museum—they worked sandy loam, a soil formed over eons from the granite that seems to deﬁne the New England character. The swales and ridges of the properties whisper of ancient times, echoes of the last glaciation. At roughly the same time, geologically speaking, that humans ﬁrst crossed the Bering Land Bridge into North America, the land formations around Amherst were settling into their current guise.

To plant a garden like Emily Dickinson’s, start with the soil. The Dickinson hired men top-dressed or tilled in amendments: well-rotted manure from stable and barnyard, plus wood ash or wash water from the laundry to “sweeten” the soil with alkali. Perhaps they added store-bought fertilizer. Hastings, a vendor in town, advertised guano and super-phosphate of lime. Emily Dickinson documented the process of building soil fertility, though she relocated it to an African clime.

To prepared soil, a gardener adds plants. Emily Dickinson had the gift of improvisation in her writing, on the piano keyboard, and in the garden. Unafraid of new combinations of words, musical notes, or ﬂowers, she tried many new plants, sourcing seeds from catalogs like B. K. Bliss. There were local sources too. Mr. Speare, whose shop was just up Main Street at No. 1 Phoenix Row, advertised “Flower Seeds, (Annuals, Bien[n]ials, and Peren[n]ials)” in the local paper. Geneva Nurseries, run by Thomas Judd and his son in South Hadley Falls, offered “Flowering Shrubs, Greenhouse Plants, Bulbs &c” in The Hampshire Express on May 3, 1866.

To plant an Emily Dickinson garden, a gardener must don a variety of hats including propagator, midwife to Flora. The simple act of planting a seed brings life from dormancy. Dickinson once noted, “How few suggestions germinate,” but seeds are simpler than suggestions. She captured the seed at the moment of breaking, the embryo morphing to send radicle down and stem up toward the light.

With constancy of warmth, water, and time, small round seed leaves emerge. The new seedling consumes food from the seed itself, a piggy-back pantry, until photosynthesis gets started. 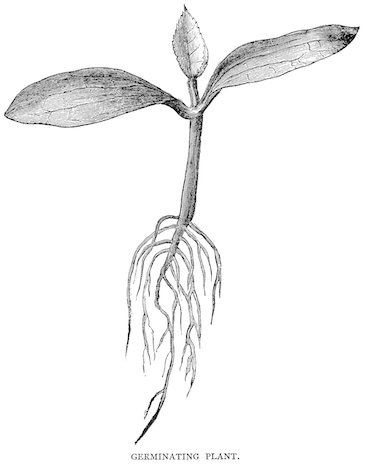 Seed starting was one of Emily Dickinson’s gardening tasks.

Her propagation efforts weren’t always successful. Some weeks after a friend sent a cutting of a ﬂowering plant from Florida, Dickinson confessed, “The beautiful blossoms waned at last, the charm of all who knew them, resisting the effort of earth or air to persuade them to root, as the great ﬂorist says, ‘The ﬂower that never will in other climate grow.’” (The “great ﬂorist” is John Milton, and the quote from Paradise Lost.) Rooting a stem is vegetative propagation, creating two where there was one. Unlike the story of Adam’s rib, it doesn’t take divine intervention for stems to take root—though it seems a small miracle when they do.

Dickinson liked color in the garden. She once wrote that she was “grasping the proudest zinnia from my purple garden.”

Annuals and biennials that propagate themselves, dropping viable seed for the next year, appeal to the little corner of Yankee thrift that inhabits the heart of every gardener. During growing season, free plants pop up that can be enjoyed, moved, or given away. Self-sowers loosen up a garden, the horticultural equivalent of deep breathing. Newly planted gardens can be stiff, arranged in symmetrical groupings or rows. Volunteer seedlings materialize wherever they like the conditions. They add a repeating element to the garden and tie things together.

It takes some practice to deal with this beneﬁcence. It can be nerve-wracking to look at a seedling and decide, sheep or goat? Weed or plant? Working with self-sowers in the garden also reinforces a certain slackness in weeding that may or may not suit your personality. Seeds need time to germinate at the right temperature, so they’ll come up all through the growing season. If you’re too tidy, if you weed too often, constantly cultivate, or mulch too much, your volunteer army will go astray. 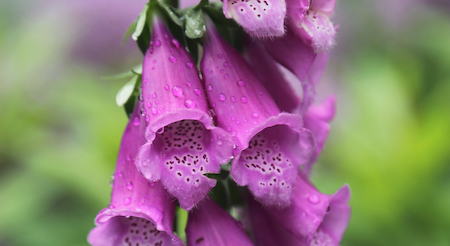 Foxglove was one of the self-sowing biennials that attracted bees and other pollinators to Emily Dickinson’s garden.

With biennials like foxgloves, extra patience is required, because they don’t bloom until their second year of growth.

Regarding self-sowers, Emily Dickinson once exaggerated for effect, tattling to cousin Fanny about her sister, “Loo left a tumbler of sweet-peas on the green room bureau,” she wrote. “I am going to leave them there till they make pods and sow themselves in the upper drawer, and then I guess they’ll blossom about Thanksgiving time.” Try some self-sowers. They are worth the wait.

Dickinson liked color in the garden. She once wrote that she was “grasping the proudest zinnia from my purple garden.” Her ﬂoral hues spanned the spectrum, but she seemed to favor the cool end: pink and blue, purple and lavender, plus white for contrast.

Perhaps Mattie was remembering ﬂower colors when she called her aunt’s garden “a butterﬂy Utopia.” Butterﬂies are sun worshippers, their bodies waiting to register higher temperatures in order to ﬂy. Especially attracted to bright colors—purple, red, yellow, and pink—they came to the Homestead’s garden to collect nectar and lay their eggs.

While Dickinson never heard the term “endangered species,” she understood it.

Whether in a “New England Town” or elsewhere, your garden needs to offer something throughout the season if you want butterﬂies to descend. Today one often hears of plant-pollinator partnerships, those particular adaptations like milkweed-and-monarch. Nineteenth-century naturalists understood this too. Thomas Wentworth Higginson mourned the loss of the native wildﬂowers as population and suburbs spread west from Boston. He continued, “and with these receding plants go also the special insects which haunt them.”

Choosy creatures, butterﬂies seek out particular host plants for their eggs and caterpillars. Some hospitable hosts are typical inhabitants of ﬂower and herb gardens; others you might only see in a meadow. Once the caterpillars pupate, withdrawing into their chrysalises and emerging as butterﬂies, their needs change a bit. They need sun, a water source, and plenty of nectar. 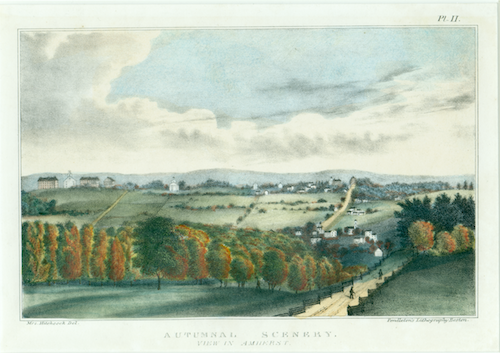 Orra White Hitchcock’s painting of the mountains, hills, and valleys around Amherst.

In the same way people select dishes at a buffet by presentation and smell, butterﬂies will search, after their meandering fashion, for ﬂowers with strong pigmentation and heavy fragrance. They prefer ﬂowers with shapes that lend themselves to easy landings—ﬂat-topped composites like asters and umbels like Queen Anne’s lace. Dickinson’s herbarium included both, plus host plants like milkweed and butterﬂy weed, and many nectar sources including hollyhock and red clover.

We know that Dickinson was alert to insect life from her writing and from the memories of a neighborhood boy, MacGregor Jenkins, who played with Austin and Susan’s children. You can almost hear her calling out from the conservatory door. “‘Come quickly,’ she said, ‘if you want to see something beautiful.’. . . [He] followed her and she pointed out a wonderful moth which had broken its chrysalis and was ﬂuttering about the ﬂowers.” Had she found the cocoon on one of the plants in the garden?

In this era of climate change, reverie alone will no longer do. Dwindling diversity is a mounting concern. While Dickinson never heard the term “endangered species,” she understood it. During the height of her wildﬂower expeditions, young Emily had already noticed the change. “There are not many wild ﬂowers near, for the girls have driven them to a distance,” she wrote in a letter, “and we are obliged to walk quite a distance to ﬁnd them.” We can add diversity back by reintroducing local species in any ground that we are fortunate enough to have in our care.

Find a reputable nursery or a friend with extra roots, shoots, and seeds. With effort and attention you, like Emily Dickinson, will harvest the pearls that result. 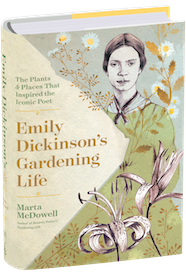 Marta McDowell lives, gardens, and writes in Chatham, New Jersey. She consults for public gardens and private clients, writes and lectures on gardening topics, and teaches landscape history and horticulture at the New York Botanical Garden, where she studied landscape design. Her particular interest is in authors and their gardens, the connection between the pen and the trowel.

Reyna Grande on Translating Her Own Book Into Spanish 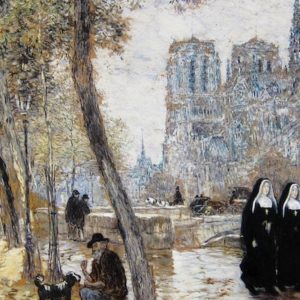 Viollet‑le‑Duc came from a family steeped in French high culture. His grandfather was an architect; his uncle was a painter...
© LitHub
Back to top
Loading Comments...