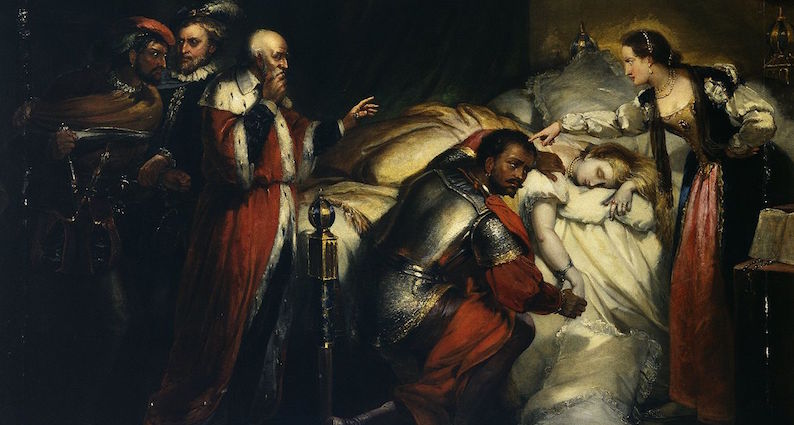 Eclipsed by the Racial Shadow of Shakespeare’s Othello

A few months back, in a Twitter discussion initiated by writer Nur Nasreen Ibrahim, a group of Muslim writers, myself included, offered some strongly worded critiques of Ayad Akhtar’s 2012 Pulitzer-Prize-winning play Disgraced. The play centers on Amir, a successful Muslim-American corporate lawyer who appears to have achieved the American dream: an excellent job, financial success, a tastefully furnished Manhattan apartment, and a white wife named Emily, an artist whose work engages with Islamic themes. Over the course of a dinner party, though, the post-racial utopia of Amir’s life collapses: despite being an “ex-Muslim” who has renounced Islam Amir admits after a few drinks that on 9/11 he felt a bit of “pride” that “we were finally winning.” This horrifies everyone and the dinner devolves into chaos. Eventually Amir learns that Emily had an affair with her Jewish art dealer. The party ends with Amir beating Emily in a rage.

Beyond the obvious problem of a post-9/11 narrative culminating in a Muslim man’s uncontrolled violence against a white woman, what struck me was just how much Akhtar was clearly influenced by Shakespeare’s Othello. I’ve always felt ambivalent towards that particular Shakespeare play. Yes, it dramatizes the psychology of an ethnic minority with a surprising degree of nuance for the 17th century and gets a white audience to empathize with “the other.” Yet the play’s racial dynamics—however woke they might have once been—have over the years ossified into a rigid model that constrains representations of brown men in white societies, and more specifically representations of romantic relationships between brown men and white women. Clearly, this is what happened with Disgraced: Amir’s violence against Emily isn’t quite an Othello-Desdemona murder-suicide, but it does end their relationship and ruin his life. Most tragically, by the end of the play, Emily renounces all her tolerant ideas about Islam. “My work was naive,” she says, with depressing finality. To a Muslim audience, this is as brutal as a blow from Amir’s fist.

Many brown men have grown up with flawed representations of interracial romances, but that doesn’t mean we’re inevitably doomed.

In his 1978 book Orientalism, Edward Said argued that the “Orient” was a European cultural construction used to justify imperialism, one that essentialized people from “the east” as uncivilized and barbaric. Sadly, Disgraced ends up embracing this essentialism: according to the play’s logic, Amir, despite growing up in the US, has an inner “Muslimness” that unleashes itself in a violent rage against his white wife. Ironically, even Shakespeare’s play was less essentialist, as Othello’s murderous rage is the product of Iago’s racially-motivated manipulations, and the audience is meant to feel a conflicted sympathy for him. In Disgraced, Amir’s rage comes across as something internal, a tribalistic sentiment that made him feel pride on 9/11—and it not only leaves audiences feeling more disturbed than sympathetic, but ultimately makes the brown man’s violence against white women seem inevitable.

Yet such representations don’t have to be beholden to Othello. Tayeb Salih’s 1966 postcolonial classic Season of Migration to the North is in fact a conscious inversion of Othello, and though it was written several years before Said’s Orientalism, it recognizes that the Othello-Desdemona dynamic isn’t an essential framework but instead part of the constructed Orientalist discourse Said describes.

Salih’s novel, set in 1950s post-independence Sudan, follows an unnamed civil servant who returns to his village after studying in England and there encounters Mustafa Sa’eed, a mysterious stranger who has recently married one of the villagers and settled near the Nile. Gradually, the narrator learns about Mustafa’s disturbing past, how he too studied in England a generation earlier, and how while there, he lured several white women into sexual relationships by playing to exaggerated Orientalist stereotypes. Three of these women eventually killed themselves, and the last he murdered himself. He then served several years in prison before returning to Sudan.

Essentially, Mustafa sought to avenge colonialism through sexual conquests. “I’ll liberate Africa with my penis,” he declared. More specifically, he saw himself as an inverse Othello. He recognized that Shakespeare’s play was an Orientalist construction—“a lie,” as he put it multiple times throughout the novel—but he acted out this lie as part of his seductions: like an actor, he took on a different name with each woman and set up the bedroom where he brought them like a stage, complete with Orientalist props like sandalwood and incense.

Yet Mustafa unwittingly acts as a colonizer himself. The novel often describes colonialism as a disease, the “germ of the greatest European violence,” and while Mustafa sought revenge by transmitting that disease to English women, he ultimately brings it back to Sudan too, to the village where he tries to resettle. During one of the Nile’s floods, Mustafa drowns, and later his Sudanese wife goes mad, murdering her second husband and then killing herself. Mustafa is therefore not just Othello but Iago, the villain whose machinations set in motion the story’s bloody conclusion.

Salih thus brilliantly dramatizes the poisonous effect of Othello. While Mustafa sought to play Othello to England’s white women by acting out a representation he knew to be a lie, he unwittingly made Othello’s violence into something real, and then redirected that violence onto his own people. The brown man’s violence against the white woman is thus no longer the inevitable result of some essential, violent Oriental impulse but instead the premeditated action of a man influenced by an English play.

In a post-9/11 America, relationships between brown men and white women can never be completely free of political subtext.

More importantly, Salih is also opening up space for a post-Othello world. At the very end of the novel, after the narrator has understood the full scope of Mustafa’s actions, he enters the waters of the Nile to drown himself in despair, largely because he recognizes elements of Mustafa in himself. But instead, when on the verge of drowning, he feels a sudden, powerful desire for life. “All my life I had not chosen, had not decided. Now I am making a decision. I choose life.” And so, he rises above the water, and “like a comic actor shouting on a stage” cries for help. It’s another clear inversion of Othello, since the narrator isn’t a tragic actor, but a comic one—but it’s also, like one of Shakespeare’s comedies, a defiantly happy ending, Salih’s symbolic representation of a culture escaping the shadow of an English play, rising reborn from the waters of the great river of Africa and taking a deep breath of a post-Othello, post-colonial world.

In my own novel, Portrait of Sebastian Khan, I attempted to dramatize a similar desire to escape Othello. As a brown man, I was often frustrated by the way any romantic interest I had for white women was pathologized as self-hatred, as if I were Othello metaphorically stabbing myself to try and get rid of my “brownness.” At the same time, I recognized that in a post-9/11 America, relationships between brown men and white women could never be completely free of political subtext. And so I wanted to write a novel that explored that dichotomy, the tension between our supposedly post-racial Obama-era America and the persistence of the Othello discourse in our culture.

My character Sebastian Khan, a biracial Muslim-American who wants essentially to exist beyond racial categories and live what he calls “a life of pure aesthetics,” regularly cheats on his brown girlfriend with white women and convinces himself that it has nothing to do with race. Eventually, though, he comes to realize that his friends don’t see him as the post-racial subject he imagines himself to be but instead as a pathetic brown man exploiting white women to fuel his own self-hatred. Essentially, he realizes that everyone around him only ever saw him as Othello.

I didn’t, however, want an audience to look down at Sebastian in this moment, or to judge him for not having had this revelation before. It’s a sad thing as a person of color when you realize that your race can affect something as intimate as your romantic relationships, and so I wanted to emphasize the tragedy of Sebastian’s new understanding. After all, I was ultimately writing a coming-of-age novel about a person of color—and this was the moment my character would finally grow up.

Of course, like Salih, I didn’t want to end my novel on a bleak note. I wanted Sebastian to emerge a better person from his newfound understanding. Many of my stories feature brown men like Sebastian who view white women through an idealized, problematic lens. I want these brown men to have happy endings, to learn to see white women in different ways, to change, mature, and ultimately realize where they’re wrong. Many brown men have grown up with flawed representations of interracial romances, but that doesn’t mean we’re inevitably doomed, like Amir. If literature is about imagining possibilities as well as reflecting realities, then it’s essential to present the possibility of change, to break away from Othello and build a vision of a new, post-colonial reality.

Aatif Rashid is the author of the novel Portrait of Sebastian Khan, out March 2019 from 7.13 Books. He’s published short stories in The Massachusetts Review, Metaphorosis, Arcturus, Barrelhouse, and Triangle House Review and nonfiction in The Los Angeles Review of Books, as well as online on Medium. He currently writes regularly for The Kenyon Review blog.

The Complexities of Talking About Race When Trapped Within Its Confines 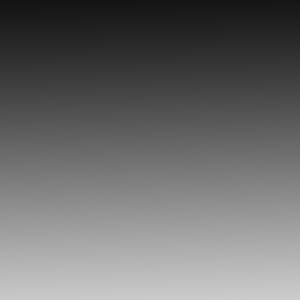 The Complexities of Talking About Race When Trapped Within Its Confines

I used to have a kind of recurring daydream several years ago. It’s a couple of decades into the future, and there’s...
© LitHub
Back to top