Seven conversations with T.C. Boyle: a writer in his habitat, living his best life • Ann Beattie has some post-book tour snack suggestions • “There are a number of things you should expect to happen in the event that you start posing as Susan Sontag on the internet.” Rebecca Brill on inhabiting the diaries of a great mind • Hot tips for a being a great literary citizen, care of Gottfried Wilhelm Leibniz • Laurence Scott on the glitching reality of contemporary America • Kevin Powers: An ode to John Graves’ Goodbye to a River • Danielle Evans gives us five reasons a writer should move to Baltimore • Not here to make friends: on six of the best bad women in fiction • Game of Thrones is over: we suggest these six epic fantasy series to slake your dragonthirst • Cutter Wood considers the implications of the retirement of the universal kilogram, the last physical object used as a standard of measurement • Xuan Juliana Wang on her long-distance dog, Ella • In India, one publisher’s high-stakes fight for a caste-free society • Can we reverse the tide of an anti-science America? • Invaluable advice from Nora Ephron, national treasure • Ryan Chapman examines the influence of McDonald’s on his novel • Jay A. Fernandez would like book reviewers to dispense with the casual narcissism (and a few other things) • Ebony Thomas on writing toward fantastic spaces as a person of color • Kate Mulgrew reflects on the work of waiting, in acting and in life • Veronica Scott Esposito on the paradigm shift that came with her transition • On the rebel Southern daughter who fought to expose white supremacy • The future is uncertain for Sweden’s floating libraries • On the origins of honeybee domestication • In praise of Cora Crane—writer, bill-payer, bordello owner—and other literary women who prop up literary men • Struggling to mine family history for a novel • 50 Raymond Carver covers from around the world

Congratulations to Jokha Alharthi and Marilyn Booth, who won the 2019 Man Booker International Prize • This week in Shhh…Secrets of the Librarians: Eugene Lim on Leni Zumas, Rupert Giles, and libraries full of tears • “The sky above the port was the color of television, tuned to a dead channel”: William Gibson’s Neuromancer at 35 • Dawson’s Fall author Roxana Robinson recommends five historical novels that inspire her, from Wolf Hall to My Beautiful Friend • This week in Secrets of the Book Critics: Gabino Iglesias on Moby Dick, Goodreads, and nightmarish fairy tales • Thomas Harris’ Cari Mora: an inventive and crisp thriller OR just ketchup sprayed on the page? • A collection of Gabriel García Márquez’s early journalism, a tome of filthy wisdom from John Waters, and more of the Best Reviewed Books of the Week

The essential debut crime, mystery and thrillers to read this May • Carlene O’Connor on the many kinds of mysteries set in Ireland • Paul French guides us through crime writing in the ancient city of Athens • Marc Cameron reflects on his time as a US Marshal in Alaska • Kinohi Nishikawa on the life and times of Donald Goines, who ushered in a new era of pulp fiction by black authors and for black audiences • Dwyer Murphy takes to the archives to catalogue the most iconic nose injuries of all crime cinema • Steph Post shows us that fairy tales are really just hard-boiled crime stories • G.S. Denning on the everlasting appeal ofHolmes/Cthulhu mashups • Deadwood is noir to its very core, and it has the rap sheet to prove it • Anna Pitoniak on Tom Ripley, Jay Gatsby, and how to con your way into the American Dream 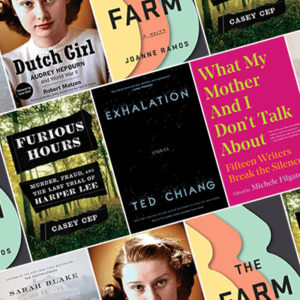 Hello from Book Marks, Lit Hub's "rotten tomatoes for books!" How It Works: Every day, our staff scours the most important...
© LitHub
Back to top