Via The Avid Reader

Kevin Powers on an Unsung Classic of American
Nature Writing

A few years ago when I lived in Texas a friend asked me if I had a favorite place. Without reflecting I said, “The James River,”  to which she replied, “The whole thing? Is a river a place?” I saw right away what a curious answer it was, though I had not intended it to be so. As I thought about it a little more I narrowed my answer a bit by adding, “I guess I mean the stretch from Scottsville to Richmond.” That’s still a big piece of river. Seventy miles or so if you leave out the bends. I let it go after that because she had not been to either town and had only passed over the river itself on the bridge that carries Interstate 95 across it. And I think she was just as happy to let it go because it’s hard to care about a stretch of river that is not your own, if you are even lucky enough to have one.

I thought about that brief conversation a lot after that. About how and why we set the boundaries to the geography of our lives, and about what role the land or water that sits inside those boundaries plays in our understanding of the world beyond them. A little while later someone suggested I read John Graves’ Goodbye to a River. The recommendation was unrelated to the first conversation, but they’ve become paired in my mind ever since.

The book categorizes itself only as “a narrative.” The National Book Award citation recognizing it as a 1961 finalist for nonfiction does little more than describe that narrative and the author’s motivation for writing it. The citation begins this way:

That is an accurate description of what happens in John Graves’ narrative. A man gets into a canoe with a dachshund in Palo Pinto County, Texas and proceeds to describe the land he passes through as he heads east. He describes all that has changed along the banks and all that may change when the damns are built and all that has and may yet change within him as he paddles along the shallow river. It is perfectly paced for the task at hand, meandering in much the same way the Brazos does through that part of Texas.

Between these two covers you will find some of the finest nature writing I have ever encountered, certainly the equal of Matthiessen’s best work in elegance and sophistication, as learned and reverently curious as Dillard’s Pilgrim at Tinker Creek. Though it has become a classic among Texans, I suspect Goodbye to a River remains largely unknown elsewhere because the vast majority of Texas is not considered conventionally beautiful in the way that the Himalayas and Blue Ridge so self-evidently are.

With its dry caliche, endless bluestem prairie, and scrub trees all that’s left to break the former up, few writers have been equal to the task of showing just how incomprehensibly beautiful the Texas landscape can be. As testimony to how effective Mr. Graves writing was in advocating for that beauty, it’s worth mentioning that of the 13 dams proposed to be built along the Brazos before he made his trip, only three were built after this book was first published. I like to think there was cause and effect at work, though I can’t say so for sure.

And if all that weren’t enough, this little narrative manages to do something I’ve never encountered anywhere else. If history can be broadly thought of as the telling of stories that have passed out of living memory, then there is a fair bit of capital H history in Goodbye to a River. You are likely to learn as much about Texas by reading this book as just about any other. Here or there it slows to elaborate on some moment of violence from the past or to paint a picture of the people who live along the banks, people who in many cases live partway in that same violent past still.

But the real and singular achievement of Goodbye to a River is that it captures the feeling of watching the passage out of living memory itself. Early on Graves writes, “Sometimes you take country for itself, for what shows merely, and sometimes it forces ghosts upon you. . .” In a story about a man, a dog, and a canoe, John Graves managed to articulate a mourning for all the lives that must become mere memories, all the memories that become stories, and all the stories that will someday stop being told.

As a Teacher of Gothic Lit, I Should Have Known Better Than to Move into a Haunted House

Real or Fake? Stuck in the Glitching Reality of Contemporary America 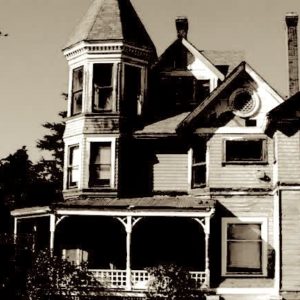 As a Teacher of Gothic Lit, I Should Have Known Better Than to Move into a Haunted House

It started with wasps. At the end of our first year in the house, they ate through the walls. I would find, first, the dusty...
© LitHub
Back to top