Large Baskets and a Whiff of Smoke Went a Long Way

The bas-relief sculptures depicting beekeeping in the Egyptian temple to the sun god Re at Abū Jirāb show us that honey bees were already living under the care of people some 4,500 years ago, but these sculptures do not reveal when the first steps were taken toward domesticating the honey bee. They do, however, provide a clue: the sophistication of the beekeeping activities depicted in these sculptures—the skilled use of smoke and the careful sealing of storage vessels—indicates that the origins of beekeeping must predate these sculptures. The latest evidence on this matter comes from archaeologists who have reported compelling evidence of widespread exploitation of Apis mellifera in the earliest farming communities in the Middle East. Specifically, they have found the chemical fingerprint of beeswax on many fragments of pottery vessels collected from the sites of prehistoric farming communities in Anatolia (a region within eastern Turkey) that date to 9,000 years before present.

Honey bees were probably important to these early farmers both for their honey—a rare sweetener for them—and for their beeswax, which probably had technological, cosmetic, and medicinal applications. Given that the close association between human beings and honey bees dates back to the onset of agriculture, it is likely that honey bees, along with sheep and goats, were among the first creatures to start moving down a path toward domestication when agriculture emerged and spread out of Anatolia and the Fertile Crescent about 10,000 years ago. 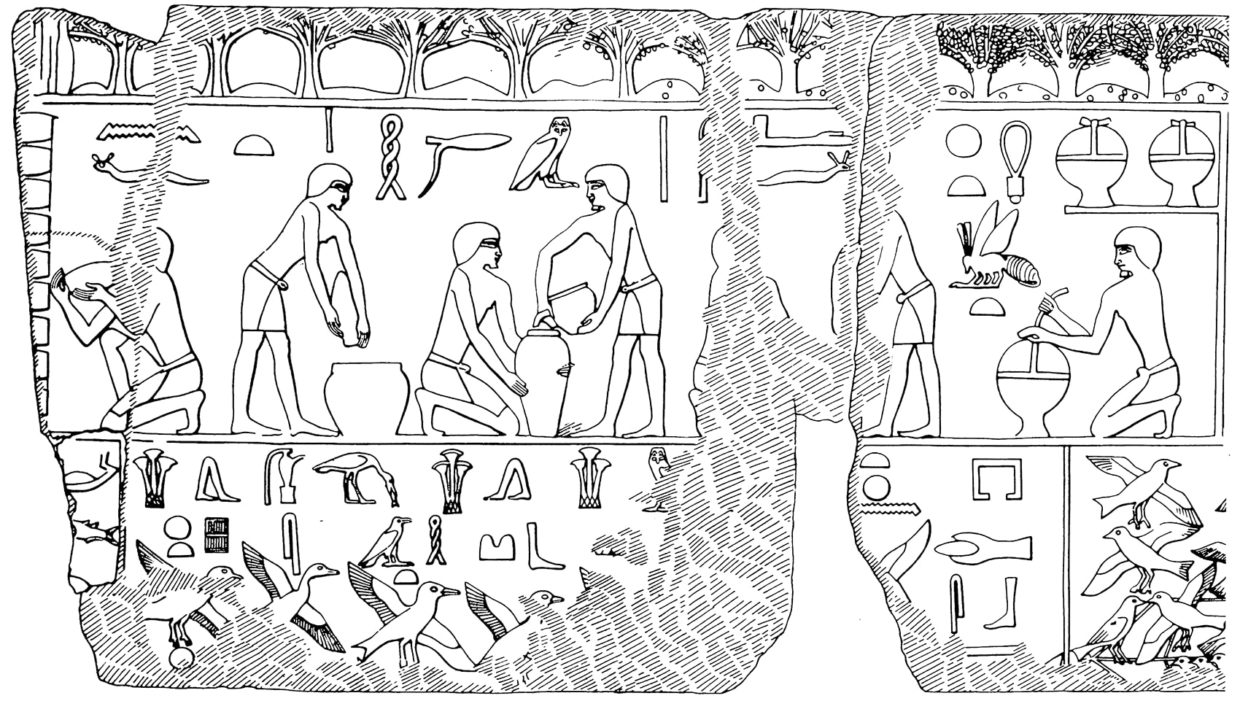 Oldest evidence of beekeeping, from the sun temple of the pharaoh Nyuserre, which was constructed nearly 4,500 years ago. On the far left, a kneeling man puffs smoke toward a stack of nine horizontal hives. In the middle, two standing men pour honey from smaller pots into larger vessels, the taller vessel being steadied by a kneeling man. On the right, a kneeling man ties a seal on a container filled with honey; on a shelf above him are two similar containers that also have been sealed shut. Courtesy Laurie Burnham.

What might have motivated ancient farmers to start keeping colonies of honey bees near their homes and under their care? Perhaps the first beekeepers were individuals who especially enjoyed the delectable honey they knew was hidden away in the nests of these mysterious little creatures. There can be no doubt that whenever one of our Neolithic ancestors bit into a chunk of honeycomb, tasted its dizzying sweetness, and smelled the appealing aroma of the honey oozing forth, he or she had an intensely pleasurable experience. Perhaps this was even a joyous experience, since golden honey was the only strong sweet known to these people. I suspect that when Moses, some 3,500 years ago, reported God’s promise to the wandering Israelites to deliver them to “a land owing with milk and honey,” his words had a significance that we cannot appreciate fully today, given how much cane sugar, high-fructose corn syrup, honey, maple syrup, and other sweeteners we now consume.

To understand fully the origins of beekeeping, though, we must consider not just the strong motives possessed by the earliest beekeepers but also the opportunities for domestication provided by the bees—of which there are two. Each is a behavioral trait that predisposed honey bees to start living around humans that had settled into an agricultural way of life. The first is the bees’ predilection for nesting in cavities the size of a water pot or large basket (20-40 liters/5.3-10.6 gallons). It may be, therefore, that the first dwelling places of the honey bee located near human homes were empty pots and overturned baskets that had been left lying outdoors and were occupied by wild swarms. This scenario seems especially likely in the grassland regions of the Fertile Crescent, where bee forage must have been abundant but natural nesting cavities were probably scarce. If this hypothesis is correct, then it was the honey bees themselves, not human beings, that took the first step toward having bee colonies reside in man-made structures (hives) arranged in clusters (apiaries) near human dwellings.

The second, and probably more important, behavioral trait of honey bees that predisposed them to domestication is described by Lorenzo L. Langstroth in the second chapter of his 1853 manual for beekeepers, Langstroth on the Hive and the Honey-Bee. Its title is intriguing: “The honeybee capable of being tamed or domesticated to a most surprising degree.” Here Langstroth explains to prospective beekeepers that even though honey bees can be as fiercely defensive of their nests as hornets, they are decidedly different from hornets in that they are not always highly defensive. He goes on to explain that worker honey bees are amazingly reluctant to sting once they have filled their crops (honey stomachs) with honey, and that it is this striking feature of their behavior that makes possible the taming of these otherwise fearsome stinging insects. 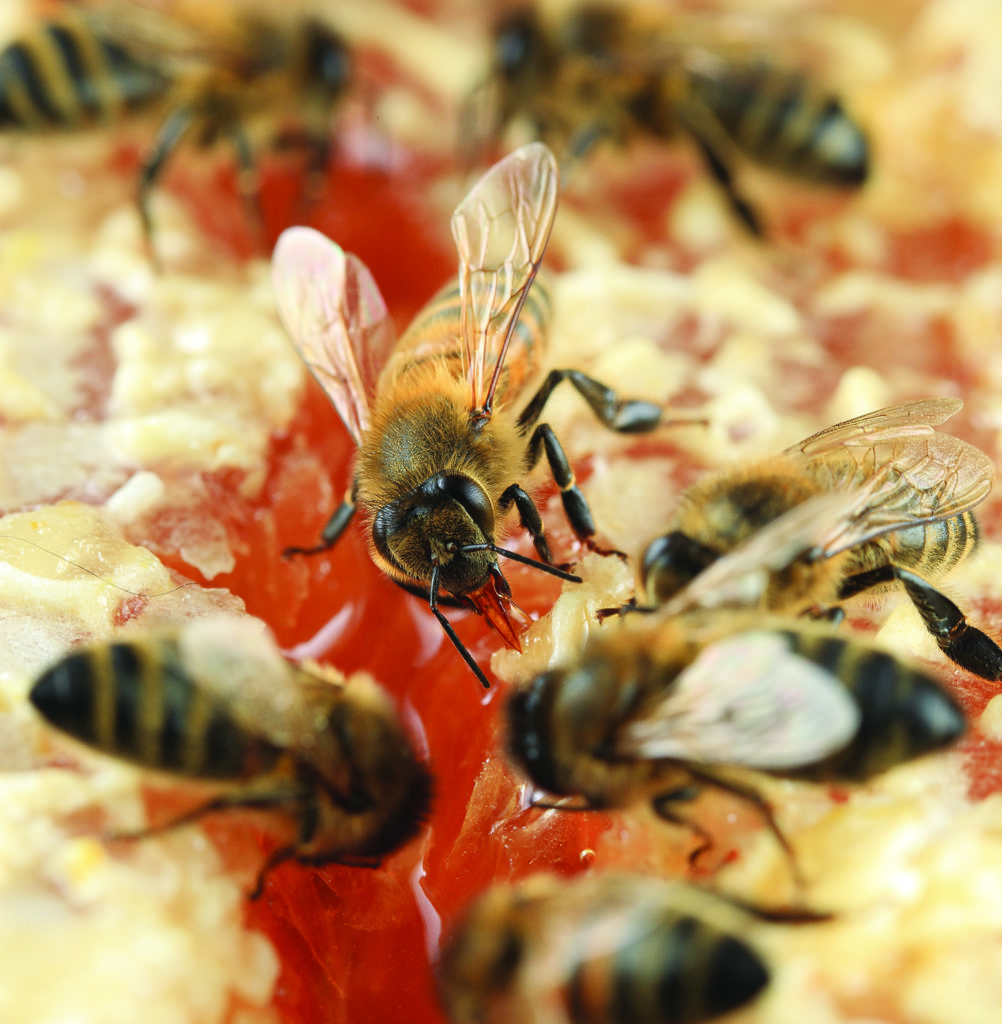 There are two distinct contexts in which it is adaptive for worker bees to stuff themselves with honey and become averse to stinging. One is when they are in a swarm. Swarming bees tank up with honey—indeed, they nearly double their body weight in doing so—before they leave their old home in order to be fully energized for the flight to their new dwelling place and for the work of fitting it out with beeswax combs. But why are these honey-laden bees so reluctant to sting? The answer is simple: the act of stinging is fatal for a worker honey bee, and a swarm needs as many worker bees as possible once it has moved into its new nest site.

One wonders, when did humans discover the magical potency of a few puffs of smoke to pacify thousands of irascible bees?

The second circumstance in which it is highly adaptive for worker bees to engorge on honey and then refrain from stinging is when their home is threatened by fire, a danger they sense by smelling smoke. A field study recently conducted by Geoff Tribe, Karin Sternberg, and Jenny Cullinan has revealed how colonies of the Cape honey bee (Apis mellifera capensis) in South Africa benefit from imbibing honey and becoming passive when they smell smoke. Seven days after a wildfire incinerated a 988-hectare (2,441-acre) swath of the Cape Point Nature Reserve, these investigators inspected 17 nesting sites within the charred landscape that they knew had been occupied by wild colonies before the fire. Each colony occupied a rock-walled cavity located either beneath a boulder or in a cleft within a rocky outcrop.

The research team discovered that all 17 colonies were still alive, even though several had suffered partial destruction of their nests: some melting of the propolis “firewall” at the nest entrance and (less often) of the beeswax combs deeper in the nest cavity. Evidently, the bees had filled up with honey upon smelling the smoke, had retreated as deeply as possible into their fireproof nest cavities, had survived the wildfire, and were sustaining themselves on the honey they had cached in their bodies. A week or so later, plants known as fire-ephemerals would sprout and start to bloom, so soon these bees would be able to resume foraging. 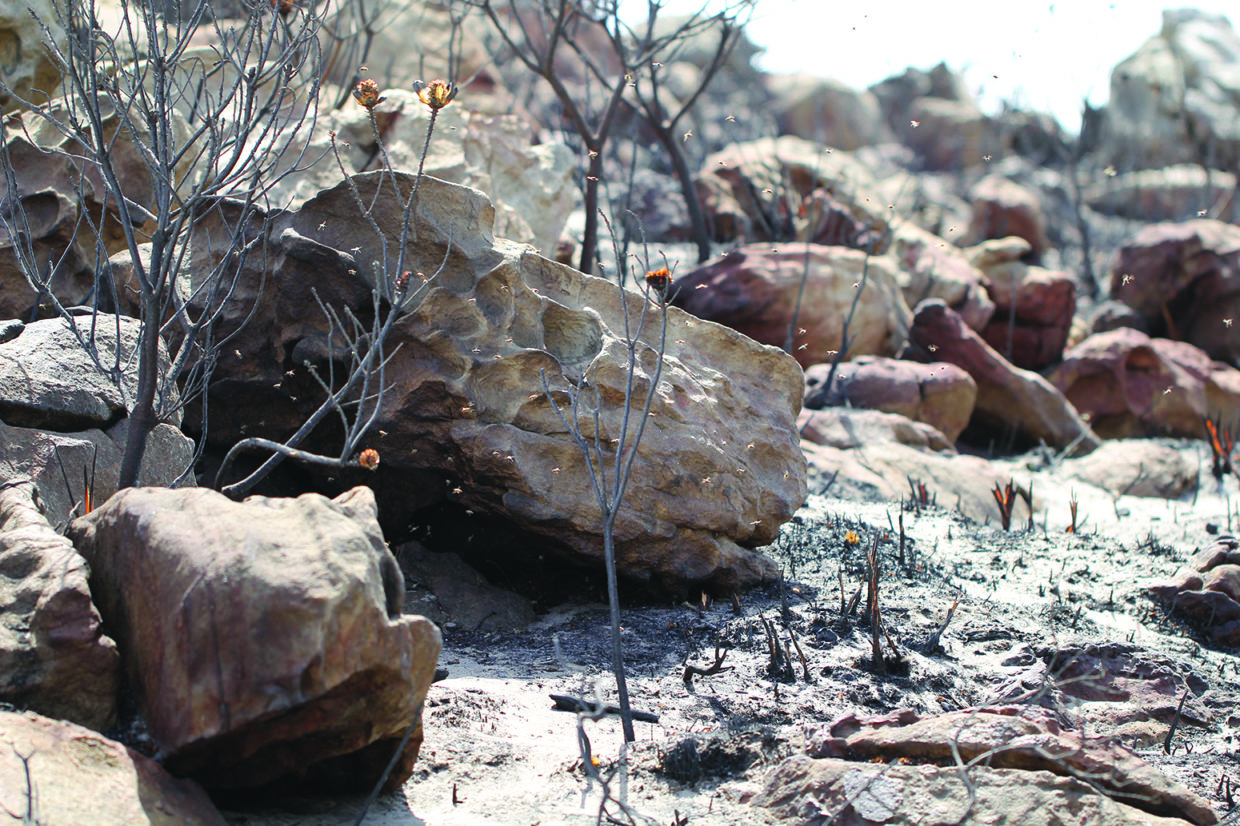 Wild honey bees in South Africa flying from their undamaged nest shortly after wildfire has swept past their home in the rocks. The heat of the fire has triggered the scorched, brushy plants (Leucadendron xanthoconus) around the nest to open their orange-brown seed heads. Courtesy Jenny Cullinan.

This investigation of wild honey bee colonies surviving a wildfire shows us how the bees’ engorgement response to smoke is adaptive for the bees living in a fire-prone region of South Africa. What it reveals, however, is a bit different from the standard explanation for why honey bees fill up on honey and become quiet when they smell smoke: to prepare for abandoning the nest to escape the fire. I think the standard explanation is probably incorrect, for I suspect it is unlikely that a colony threatened by fire can successfully evacuate its nest site and fly off through flames and smoke, especially since its queen is apt to be gravid and therefore a perilously clumsy flier.

One wonders, when did humans discover the magical potency of a few puffs of smoke to pacify thousands of irascible bees? The beekeeper blowing smoke toward a hive in the first image above shows us that 4,000-plus years ago Egyptian beekeepers already knew this trick for calming their colonies. It is possible, though, that the power of smoke to disarm a honey bee colony had been stumbled upon much earlier, indeed long before the origins of Egyptian beekeeping, back when humans were still just bee hunters, not yet beekeepers. Archaeological evidence indicates that the controlled use of fire was universal among humans some 120,000 years ago. 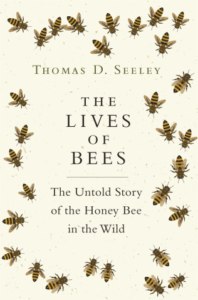 Excerpted from The Lives of Bees: The Untold Story of the Honey Bee in the Wild by Thomas D. Seeley. Copyright © 2019 by Princeton University Press. Reprinted by permission.

Thomas D. Seeley is the Horace White Professor in Biology at Cornell University. He is the author of Following the Wild Bees, Honeybee Democracy, and Honeybee Ecology (all Princeton) as well as The Wisdom of the Hive. He lives in Ithaca, New York. 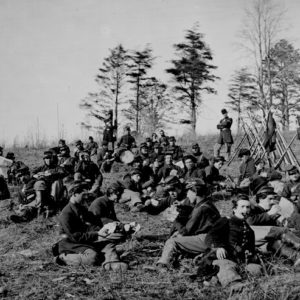 Struggling to Mine Family History for My Novel The story was a good one: Francis Warrington Dawson came from England to fight for the Confederacy. After the war, he stayed...
© LitHub
Back to top
Loading Comments...