TODAY: In 1930, almost 6,000 spiritualists gather in the Royal Albert Hall for a memorial to Sir Arthur Conan Doyle, attended by his relatives. The medium Estelle Roberts relays a private message to Doyle’s widow which she affirms to be genuine.

Kimi Eisele on finding light in the darkness of a financial dystopia • Whitney Terrell: Is the American ballpark more public space or private playground? • Kerri Arsenault on food insecurity in small-town Maine • Irene Goldman-Price on Edith Wharton’s little-known poetry of love and regret • Falling for a statue of Hermes in Athens

• Chuck Wendig on enraging Tolkienites, pickling himself in Star Wars, and gin • In memory of Michael Seidenberg, owner of Brazenhead Books • Alejandra Carles-Tolra documents Jane Austen cosplay in the English countryside • The liberation and consternation of writing a whole book with paper and pen • Lara Williams on hunger, women’s bodies, and Margaret Atwood’s first novel • Anthony McCann on the Constitutional confusion of the so-called American Patriot Movement • On the uncanny global adaptability of American fast food • Marcy Dermansky on how General Hospital inspired her novel • A poem by Charles Simic from his new collection • Miciah Bay Gault on finding small comfort in the panic of Shirley Jackson • Daido Moriyama, legendary street photographer, on how to take a snapshot • Peter Edelman on America’s war on the poor • Saskia Vogel on Three Women and the reportage of desire • How America came heartbreakingly close to universal healthcare (but opted for profit instead) • Courtney Maum on finding friendship with her online Spanish teacher • A Christian college fires an incoming professor due to the contents of his novel • Marian Ryan in Berlin, reading Han Kang • The 50 best one-star Amazon reviews of To Kill a Mockingbird

Chicago's only black woman-owned bookstore is open for business. 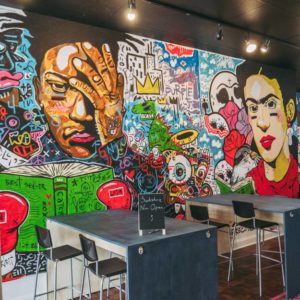 Chicago's only black woman-owned bookstore is open for business.