Helen Phillips on grief, anxiety, and crafting a terrifying literary thriller • Andrew Ervin talks to Robert Macfarlane and Emily Wilson about the world’s “thin places” • Are you an adult who loves Veronica Mars? Scratch your itches for small-town California noir, private detective hijinks, and witty repartee for days with these 11 books • Karen Tongson on her namesake, Karen Carpenter • On the connection between writing and cruising • Was The Odyssey the first Greek novel? • Walt Odets on the first years of the AIDS epidemic and the stigmatization of gay men • Behind the myths of Scott and Zelda’s epic romance: Eleanor Lanahan on her grandparents’ love letters • Some free summer reading advice: cultivate an obsession with Mary McCarthy’s “grimly truthful and strangely modern” The Group • Rick Moody, life coach, returns to tackle questions of body image and self-loathing • Elizabeth Bales Frank on the pleasures and perils of life as a law firm’s poet laureate • Karl Marlantes on the lumberjacking lives of his ancestors • On the uncomfortable contradictions of “Amazing Grace,” which was written by a slave trader •

Monica Ali on one of the most insidious myths of the book world • July’s best book covers pair well with a swimsuit • On the underground group supplying incarcerated people in Pittsburgh with books • The unsung woman who changed how we take care of newborns • Writer’s block? Nick Ripatrazone has a poem for that • How Trump’s failed wall still wreaks havoc at the US-Mexico border • Four coming-of-age stories that break down the barriers between adult and YA fiction • On one of the great Dutch novels of social reform • Barred from the 1976 Olympics, these swimmers still beat Olympic records • On opening Ghana’s first subscription-model library • Sally Denton on the cowboy constitutionalists of the Oregon militia standoff • Kim-Marie Walker gives an appraisal (and update) of Lit Hub’s Climate Change Library • Why do we buy books and not read them? Karen Olsson on the ghosts on her shelves • What Caliban tells us about gatekeeping and language • A visual dive into the cultural history of the swimming pool

The Houston librarian dedicated to community over quietude • Christopher Benfey, the author of If: The Unfold Story of Kipling’s American Years, recommends five books from Rudyard Kipling’s New England • “To write about water you have to follow it. And to follow it, you have to get on it”: Porter Fox recommends 3 books about how water is changing our world • Nora Caplan-Bricker on Ursula K. Le Guin, Elizabeth Hardwick, and mixed reviews • New titles from Laura Lippman, Chuck Klosterman, Courtney Maum, and more all feature among the Best Reviewed Books of the Week 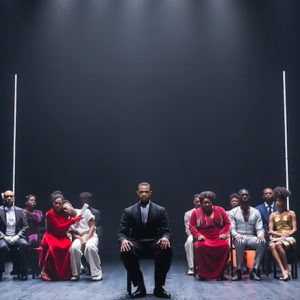 I'd call it a remarkable legacy for a poet to have, whose work, over time, time and again, has allowed playwrights and musicians...
© LitHub
Back to top
Loading Comments...