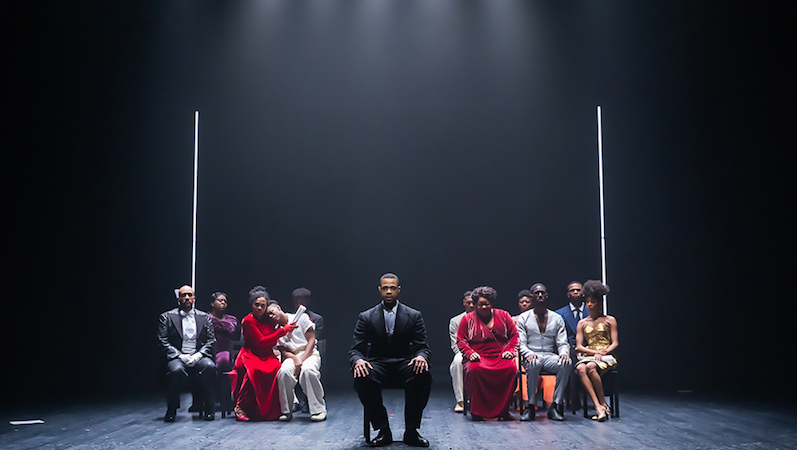 I’d call it a remarkable legacy for a poet to have, whose work, over time, time and again, has allowed playwrights and musicians to plumb it for more. Admittedly I’ve read only a little of Langston Hughes’ poetry. He is the kind of writer whose language is so direct that it can fool you into thinking you’ve understood everything on first read.

That faulty approach to his work is explicitly rejected in The Black Clown, a musical theater piece adapted from the eponymous 1931 Hughes poem, staged as part of this year’s Mostly Mozart Festival in New York City. Conceived by composer Michael Schacther and the lead actor, bass-baritone Davóne Tines, The Black Clown had its US premiere last fall at the American Repertory Theater in Cambridge, MA.

There is a theatrical tradition of narrators and emcees getting caught up in a show’s events to comic or tragic effect (think, the Narrator from Into the Woods, Cabaret‘s unsettling Master of Ceremonies, Che from Evita). The same is true in The Black Clown, whose song lyrics are taken from the poem (while the stage directions derive from a distinct part of the original piece that Hughes calls “The Mood”).

Tines opens the show reading Hughes’ original stage notes in his resonant voice: “A dramatic monologue to be spoken by a pure-blooded Negro in the white suit and hat of a clown, to the music of a piano, or an orchestra.”

Significantly, Tines’ clown doesn’t walk out in this costume, but meticulously puts it on as he sings the first number (“You Laugh”), a droll homage to vaudeville, not only in the spirit of the Marx Brothers, Red Skelton, and the Stooges, but, perhaps more pointedly, in the vein of a Bill “Bojangles” Robinson minstrel show. The production’s all-black ensemble is especially marvelous in this sequence, with dancer Amber Pickens embodying a Josephine Baker-type, while Evan Tyrone Martin and Darius Barnes replicate the once unimaginable feats of the Nicholas Brothers (down to the gravity-defying splits).

The jubilance of these early routines, set in a Harlem Renaissance-era supper club, is quickly deflated by the Clown’s woes: “I am the fool of the whole world. / Laugh and push me down. / Only in song and laughter / I rise again—a black clown.” The contrast of ebullient choreography and tired lament recalls both the quintessential poem of Hughes’ predecessor, Paul Laurence Dunbar’s “We Wear the Mask,” and sociologist W.E.B. DuBois’s famous notion of “double consciousness”—a sense that black lives are performances in search of authenticity, forcefully inclined to appease white watchers, however much the individual resents it.

The show, like the poem, is an address to a predictably majority-white audience. If Hughes’ poem reads “a bit on the nose,” it is because his intended audience probably didn’t realize what was going on right under it. As a visual-musical production, The Black Clown unearths and plays with the subtleties in Hughes’ clear pronouncements. The show’s “plot” is the arc of black American history—vignettes unbroken by unsung speech that start in a period concurrent with the Harlem Renaissance. We go back in time to an era of slavery and family separations, then proceed through the misplaced optimism of post-Civil War America, work camps, the Jim Crow Everywhere, black churches and funerary processions, a cramped room that might as well be a prison cell, lit with a single lightbulb, and into the ongoing age of Black Power.

Tines plays the Clown as an Everyman who forgets, or never had the luxury of knowing, he is supposed to be like everyone else. In a remarkable rendition of “Sometimes I Feel Like a Motherless Child,” he bemoans his loneliness even as the chorus attempts to uplift him by singing along with him. At various points throughout the show, the Clown is a conductor along the Underground Railroad, a Haitian bokor animating a pair of black “zombies” around him, in other words a powerful agent of his own will, as we might expect a narrator to be.

But he is also jostled as he stands in the way of fugitives, maybe slaves or runaway prisoners or protestors on the street, given to exhausting displays of grief, a sweating, bellowing man who recalls singer-activist Paul Robeson—a man whose memorable voice and empathy did not always save him from despair.

The Black Clown has many magisterial moments, but none so caustic, funny and sobering as the song “Freedom” (Tines sings, and Hughes writes, “Freedom! / Abe Lincoln done set me free— / One little moment / To dance with glee”). It is a nearly ten-minute phantasmagoria that plays out on stage like a moving political cartoon: a black Abraham Lincoln walks out on stilts, looking more clownish than the Clown, and unfurls a giant scroll with the text of the Emancipation Proclamation. The blacks are free, it seems. The ensemble hits every shimmy and Charleston precisely as puppet-master Abe directs them, promenading down an invisible catwalk with chains as boas, then using a noose as long as a living room to jump rope and play hopscotch and tug-of-war.

It is a clear message, so clear that it begs the audience to ask more and complicate it themselves. The Black Clown skillfully dusts off this gem in Hughes’ oeuvre. We can only hope that more dancers and singers will soon stumble upon the poet’s work.