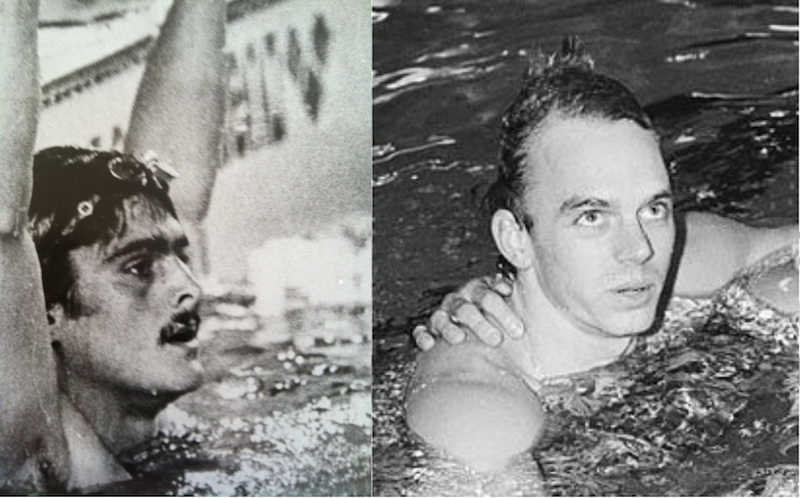 Barred from the 1976 Olympics, These Swimmers Still Beat Olympic Records

Behind the starting block for the 100m freestyle race was a tall, slim young man with straight posture, a pronounced chin, and a dark mustache. Someone familiar with British comedy would probably detect a certain resemblance to John Cleese. The blue letters “CJAC” on his orange shirt indicated that he competed for the Central Jersey Aquatic Club. The John Cleese look-alike was in great shape. He spun his arms and looked down the 50-meter pool. The only thing on his mind was the 100m race ahead of him. He’d swum this race before—at least once a day for the past six months.

A downside of the meet was the quality of the pool, far from the standards of the recent Olympic pool of Montreal. The pool in Philadelphia had no wash-through gutter and was only 3 feet (0.9 m) deep in the shallow end. It was very wavy and had just enough room to perform a flip turn without head injury. The Philadelphia Department of Recreation later filled up Kelly’s and replaced it with a lawn bowling court.

That week in August was one long, massive celebration of the American Olympic team, which had won every single medal except one at the men’s events at the Montreal Olympics a few weeks before. Olympic gold medalists such as John Naber, Peter Rocca, John Hencken, and Shirley Babashoff earned a lot of applause, along with the women’s team, which had beaten the fiercely powerful East German team in the 4 x 100m freestyle relay final.

At the races that day, however, there were two other swimmers who brought the sport back to the future: Jonty Skinner and Jesus Vassallo. Jonty Skinner was the name of the John Cleese clone. He stood 6’6” (198 cm) tall and swam for the University of Alabama, where he’d won the NCAA championship in the 100m freestyle a year prior. At that time, the men’s college championships (NCAA) was the fastest swimming competition in the world.

With Skinner absent, Jim Montgomery, who trained in the old home pool of Mark Spitz in Indiana, had won the 100m freestyle in great style. He became the first swimmer to complete a 100-meter race with an average speed of over two meters per second. With this speed, he was able to butcher Mark Spitz’s Olympic record (51.22), and his 49.99 was a whole 0.82 second better than Jack Babashoff, who came in second—and coincidentally used to train with Skinner in Alabama.

Skinner was thrilled to be standing there at Kelly’s pool in the summer heat. He’d been training throughout the whole summer and was in the best shape of his life. As he wasn’t allowed to compete in international championships, he’d never before focused on swimming fast in a 50-meter pool. When asked about his swimming, he’d replied, “Whatever the winning time in Montreal, I will swim faster in Philadelphia.” Skinner was a pioneer in the use of mental visualization. Time and time again, he’d gone through the race in his mind—what it would feel like, what he should focus on, how he would be able to fight the shocking muscle rebellion that breaks out in a swimmer’s body in the second half of a 100m race.

When asked about his swimming, he’d replied, “Whatever the winning time in Montreal, I will swim faster in Philadelphia.”

Jonty Skinner’s leg kick had never been anything to write home about. Other 100m swimmers typically have a constantly pounding leg kick. Skinner’s left foot kicked down once his right hand entered the water, and his right foot went down once his left hand did the same. In between, he let his feet casually rotate around each other—a style he’d developed in his young teens when training under his father, Doug, back home in Cape Town. Other swimmers who’ve used the same type of kick include Anders Holmertz and today’s long-distance champions, Gregorio Paltrinieri and Katie Ledecky. These days, however, practically no one uses Skinner’s technique when swimming the 100m freestyle.

The drawback of this two-stroke leg kick is that it doesn’t provide all that much forward momentum. Nor is it particularly good at lifting the body, especially if the body is more muscular. Jim Montgomery’s 195 pounds were distributed over his 6’3” frame. Jonty Skinner’s slim 6’6” body weighed no more than 185 pounds and was therefore better suited to the two-stroke leg kick. A benefit of using this leg kick is that it saves a lot of energy as long as your feet and legs don’t stick out too much. It may also help your balance, which is why it’s beneficial if you tend to go wide when returning your arms to the water.

Skinner’s technique and mental preparation turned out to be more than sufficient for this race of the year—perhaps even the decade. He crushed the Americans who’d made their way to Philadelphia. Montgomery, the Olympic hero, wasn’t there, but Skinner beat his world record (49.99) with a time of 49.44. This was also the first African world record in swimming and it stood until 1981.

Skinner’s fierce dream race broke the norm of the dominance of the American men’s team in the 1970s. The United States had won 12 out of 13 events at the 1976 Olympics, losing the 200m breaststroke to John Hencken from the United Kingdom. At that time, participating nations were allowed to field three swimmers per event. That meant that there were 33 individual medals up for grabs. The Americans took 25 of these.

Another race that changed the world of swimming in Philadelphia in 1976 may be attributed to Jesus (or “Jesse,” as he referred to himself) from the Mission Viejo swim club in Southern California.

At the 100m backstroke event, the heavily perspiring crowd at Kelly’s pool saw yet another tall, mustachioed swimmer walk up to the starting block. John Naber had won one silver and three gold medals in Montreal. His specialty was the backstroke, but he was capable of competing in the other styles as well. Next to him stood Jesse Vassallo, who was just 14 years old, had a slight frame, and was a full foot shorter than Naber. Vassallo was one of the most promising American long-distance swimmers who’d made great times at the qualifying races for the 1976 Olympics. His 15:31 on 1,500m freestyle is still the best time performed by a 14-year-old. He was even faster than Michael Phelps, who’s at fourth place on this list with 15:39, and Swedish Anders Holmertz, who’s third with 15:37.

Just like Skinner, Vassallo had been prohibited from competing in the Montreal Olympics. By living in the United States, he had broken the rules of the Puerto Rican Olympic Committee stipulating that you had to live in your native country for at least one year prior to the Olympics.

Vassallo was still extremely popular in Puerto Rico, despite the fact that he’d left the country when he was only 11 and he’d chosen to compete for the United States.

Following his exclusion from the Montreal Olympics, Jesse wanted to try new distances other than the monotonous long-distance races. He had finally settled on the 100m backstroke and he’d ended up next to John Naber in the trials. The young long-distance swimmer had figured out a way of avoiding a problem that had concerned him—being “drowned” by the backwash from the massive Naber. After the start, Vassallo remained underwater and moved like a dolphin, using his abdomen to move forward. Those in the audience who weren’t blinded by Naber’s star-like appearance had a good laugh at Vassallo’s strange style.

In the summer of 1979, the Pan-American Games were held in the Puerto Rican capital of San Juan. Vassallo was still extremely popular in Puerto Rico, despite the fact that he’d left the country when he was only 11 and he’d chosen to compete for the United States. In 1979, Sports Illustrated ranked him one of the ten greatest athletes in the world, together with racing champion Mario Andretti, tennis star Björn Borg, and even Muhammad Ali.

Ahead of the 1979 Pan-American Games, Vassallo’s uncle Salvador had spent $6,000 on printing 2,000 bright yellow T-shirts saying VASSALLO in large red capital letters. He handed out these T-shirts to family, friends, and the audience. The people in yellow carried Jesse during the race, all the way to the top of the podium. After “The Star-Spangled Banner” ended, the crowd in yellow started singing the Puerto Rican national anthem, “La Borinqueña.” The excitement of the crowd knew no bounds when Jesse waved a Puerto Rican flag. Jesus “Jesse” Vassallo, the son of Puerto Rico who was just 14 years old, was the best swimmer in the world.

As expected, the 14-year-old Vassallo did not make the team in the 400m medley at Kelly’s pool that day, but he was still no more than two seconds away from qualifying for the American national team. When he won the same Olympic qualifying race four years later, his time was 4:21. At the 1980 Olympics in Moscow—which President Jimmy Carter chose to boycott as a result of the Soviet invasion of Afghanistan—Oleksandr Sydorenko won the 400m medley with a time of 4:22.

Swimming competitors in the Moscow Olympics were limited to say the least. At the 1976 Olympics in Montreal, 262 men and 208 women from 51 countries had participated. In Moscow, there were only 190 men and 143 women from 41 countries. The United States was missing, along with West Germany, Japan, Canada, and the strong Italian team. The British protested in a polite way by sending a smaller-than-usual team. France and the Netherlands participated, but in support of the U.S. boycott, did not display their flags on the state-run Soviet television. Somalia, Gabon, and Norway also boycotted the games, though this didn’t affect the outcome of the events.

So, what about Puerto Rico? Well, German Rieckehoff, head of the island’s athletic federation, wanted to send a team based on his conviction that sports and politics shouldn’t be mixed. He didn’t receive any financial support from the government, but was still able to send the boxer Alberto Mercado, who subsequently became the only American citizen to participate in the 1980 Summer Olympics. 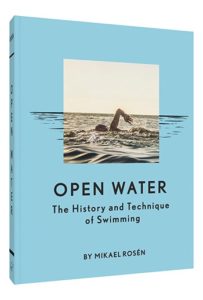 From Open Water: The History and Technique of Swimming, by Mikael Rosén, published by Chronicle Books. Used with permission.

Mikael Rosén is known as The Rain Man of Swimming. He is the head coach of Sweden Open Water and travels the world sharing his extensive swimming knowledge. As a competitive swimmer, Rosén placed second in the World Cup, was a 19-time national champion, and placed sixth in the OTILLO Swimrun World Championships.

My Coming Out is a Story of Forgiveness 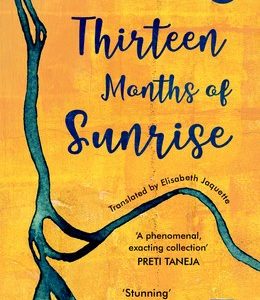 He woke up early, unusual for him, and got out of bed with cheerful enthusiasm. He headed to the tap to wash his face...
© LitHub
Back to top
Loading Comments...