TODAY: In 1904, James Joyce’s story “The Sisters,” the first story in his 1914 collection Dubliners, is published in the Irish Homestead.

Tarek Abi Samra on stealing Kant from a bookstore • Katya Cengel wonders how to write about the war in Ukraine • How America’s river wanderers built a life on the water • Will McGrath on traveling through rural Maine with young children • How CCR, “the Boy Scouts of rock and roll,” took California by storm • The women who paid with their lives in pre-abortion Ireland • “A wine writer who couldn’t smell, let alone taste? Who would ever trust me?” • Meet the first very good boy in the White House, Laddie the Airedale terrier • The long history of anti-abortion law • Kiki Petrosino muses on race and where “brightness” begins • Trying to understand a mother through writing fiction • Kimberly Garza on being a writer from Texas • On the early days of queer feminism • Megan Giddings on getting angry at the movies • Why the simulation theory is a question of faith, not logic • Melody Razak considers women’s testimonies that survived the Partition of India • Four poems of war by Marianna Kiyanovska • On the gruesome methods of justice in Medieval Europe • Jehanne Dubrow on taste: “We are what we eat, because the things we consume become part of our cells.” • Leslye Penelope considers the line between “truthy” and truth 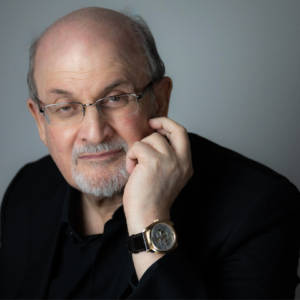 According to the Associated Press, Salman Rushdie was stabbed at a Chautauqua, NY event where he was set to deliver a lecture: An...
© LitHub
Back to top