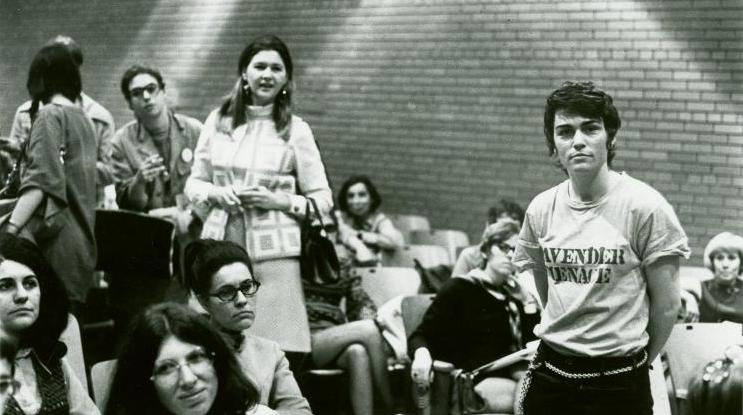 “It bores me, Polina,” Molly says. “I mean men bore me. If one of them behaves like an adult it’s cause for celebration, and even when they do act human, they still aren’t as good in bed as women.”

Continuing to drink, Polina pushes her: What exactly is so different about having sex with women?

“For one thing, it’s more intense,” Molly tells her. “It’s the difference between a pair of roller skates and a Ferrari.” Next to lesbianism, she says, the heterosexual world looks “destructive, diseased, and corroded.” Without warning, Molly goes ahead and kisses Polina, who is shocked and appalled.

“Why don’t you climb off your sanctified prick,” Molly taunts. “You dig it. Anyone with half a vagina left would dig it. Women kissing women is beautiful. And women making love together is dynamite. So why don’t you just let yourself go and get into it.” Polina, predictably, lets herself go and gets into it, kicking off an affair propelled by Polina’s growing lust for Molly.

This kind of scene, a sapphic inversion of the classic “you know you want this” coercion, unfolds more than once in Rubyfruit Jungle. From the time she’s in sixth grade, irresistible, rough-and-tumble Molly turns out one pretty girl after another, most of whom swear they’re not lesbians. To Molly, being gay is a no-brainer, and any woman who actively chooses straightness is a fool.

In this case, art imitated life. By the time the novel came out, Rita Mae Brown had helped ignite a full-on lesbian political movement. Born to an unwed teenage mother and adopted by distant relatives, she had a white, working-class Southern upbringing. In the mid-60s, she was effectively blackmailed with the loss of her scholarship to the University of Florida, for some opaque combination of being a lesbian and instigating civil rights actions on campus.

In some circles, declaring oneself a lesbian became a prerequisite to feminism, while heterosexuality was a weaker reformist position.

Shortly afterward she hitchhiked to New York and started writing for underground newspapers like Rat. She also joined the local chapter of NOW in late 1968, though she never felt like she fit in. Rita Mae was twenty-four and still fresh out of Gainesville; these fancy ladies were at least ten years her senior and wore “pretty Emilio Pucci dresses,” she recalled in her 1997 memoir. Still, “the act of women gathering in one room to discuss being women in a political context was exciting,” even if they complained about men too much. Eventually, Rita Mae worked on NOW—New York’s newsletter and was a fixture at meetings.

During one meeting in 1969, she spoke up and came out: “I’m tired of hearing everyone moan about men,” she said. “Say something good about women. I’ll say something good. I love them. I’m a lesbian.”

These days this speech would be unremarkable in a feminist group. But back then, many liberal feminists were openly homophobic. Betty Friedan and other hetero feminists from NOW worried that lesbians were too “butch,” too unpalatable to the mainstream, and would hobble the movement’s power. Pretty soon, Friedan was declaring NOW’s lesbian faction a “lavender menace” and cutting the Daughters of Bilitis, a lesbian civil rights organization, from the list of sponsors of the First Congress Unite Women in November 1969. As for Rita Mae, she was pushed out of NOW shortly after her declaration.

She decided to try the radicals downtown instead. She showed up at a few Redstockings meetings but found she had little in common with them either. Though they were “polite” and “took it in stride” when Rita Mae raised the issue of lesbianism as a site of oppression, “they had no intention of considering the reality of a gay woman’s life.” The presumption that women were heterosexual, and therefore motivated to transform personal relationships with men, was key to the Redstockings’ strategy. For Rita Mae, that felt like a lot of wasted energy. She felt she had no choice but to go out and organize other lesbians.

She persuaded a group of lesbians in the Gay Liberation Front to start raising the issue of heterosexism not only in the outside world, but among other feminists. On May 1, 1970, the opening night of the Second Congress to Unite Women, the ragtag group staged their first big action. Before the proceedings started, about forty lesbians stormed the auditorium, many of them wearing light purple T-shirts with LAVENDER MENACE stenciled on the front. The women held the floor for two hours while they explained the realities of being a lesbian in a straight world. The group, who would later call themselves the Radicalesbians, also handed out what would become a formative text of lesbian feminism: “The Woman-Identified Woman.”

The paper spent a lot of time dispelling feminists’ assumptions about lesbians—that they all want to mimic men, or that experimenting with women was just part of the groovy counterculture, or that being a lesbian is solely about whom you fuck. It reframed lesbianism as not just a private bedroom activity but a political choice, one that allows women to “withdraw emotional and sexual energies from men, and work out various alternatives for those energies in their own lives.”

Even more than that, lesbianism offered psychic freedom from the “male-defined response patterns” ingrained in women. The paper was the first major document of the women’s movement that deemed lesbianism as inseparable from female liberation. It blended lesbian sexual politics with a broader sense of community, solidarity, and bonding among women. The bedrock of this argument was that lesbianism was a holistic, pro-woman ethos that one could opt into.

In some circles, declaring oneself a lesbian became a prerequisite to feminism, while heterosexuality was a weaker reformist position. Male supremacy was the fault of not just men but also women who reaped the privileges of heterosexuality. “Lesbianism is the key to liberation,” Charlotte Bunch, a member of the lesbian separatist group the Furies, wrote in 1972, “and only women who cut their ties to male privilege can be trusted to remain serious in the struggle against male dominance.” Radical lesbian Jill Johnston, who reclaimed the term “lesbian chauvinist” from skeptical straight feminists, wrote in her 1973 polemic Lesbian Nation that male privilege would be eradicated only “through instant revolutionary withdrawal of women from the man or the system,” which she saw to be inextricable.

This separatist hard line didn’t resonate with many lesbians of color, who found it unfair—and besides that, racist—to be made to ignore their shared oppressions, and therefore solidarity, with Black and brown men. “We reject the stance of Lesbian separatism because it is not a viable political analysis or strategy for us,” read the 1977 statement of the Combahee River Collective, a Black feminist group that included lesbians like Barbara Smith and Audre Lorde. “As Black women we find any kind of biological determinism a particularly dangerous and reactionary basis upon which to build a politic.”

Or, as Chicana lesbian feminist Cherríe Moraga put it in the introduction to the landmark 1981 anthology she edited with Chicana feminist Gloria Anzaldúa, This Bridge Called My Back: “The lesbian separatist utopia? No thank you, sisters. I can’t prepare myself a revolutionary packet that makes no sense when I leave the white suburbs of Watertown, Massachusetts and take the T-line to Black Roxbury.”

Still, many women of color also saw their lesbianism as a full-throated choice, as bigger than just who they slept with, and as a welcome relief from a culture poisoned by deep-seated misogyny. “Being lesbian and raised Catholic, indoctrinated as straight, I made the choice to be queer (for some it is genetically inherent),” Anzaldúa wrote. Black poet and activist Cheryl Clarke, who called lesbianism “an act of resistance,” framed that identity as an affirmative choice in 1983: “I name myself ‘lesbian’ because I do not subscribe to predatory/institutionalized heterosexuality… I name myself ‘lesbian’ because it is part of my vision. I name myself lesbian because being woman-identified has kept me sane.” It wasn’t an affinity based just on sex, and not even based just on politics, but on self-protection and survival.

Of course, there was a thin line between making space for a positive choice and setting up yet more mandates for moral and political purity. The equation of lesbianism with feminism itself ended up alienating many women who slept with men, sometimes outright banning them from meetings (the Feminists, for example, had quotas of how many married women could be in the group). Bisexual women felt rejected by both sides, not only marginalized in the straight world but also labeled as traitors by lesbians—a double bind that persists to this day.

Lesbian activist Sharon Dale Stone, looking back on her separatist days in the 1970s, regretted how she dismissed bi women as “unsavory characters who fed on lesbian energy,” their orientation “proof of their male identification.” Bisexual activists like Lisa Orlando, June Jordan, and Lani Ka’ahumanu pointed out how harmful and discouraging this could be for women who were seeking sexual freedom. “The desire to identify with a community often forces bisexuals to repress a part of themselves,” Ka’ahumanu wrote in 1987. “If I kept myself quiet for another’s sense of pride and liberation, it was at the cost of my own.”

This dubious distinction mirrored the debate around “pornography” versus “erotica” in the anti-porn movement, a faction of radical feminism that focused on the sexual victimization of women and overlapped with lesbianism. The dichotomies of pornography/ erotica and male sexuality/female sensuality were invoked by feminist writers all over the map, from Andrea Dworkin to Gloria Steinem to Audre Lorde. The contrast was often framed as so innate, so obvious, that anyone who disagreed was lying to herself: “Every woman here knows in her gut,” wrote Robin Morgan in 1978, “that the emphasis on genital sexuality, objectification, promiscuity, emotional noninvolvement, and coarse invulnerability, was the male style, and that we, as women, placed greater trust in love, sensuality, humor, tenderness, commitment.”

In a phone conversation, Cherríe Moraga told me that the distinction between sensual lesbian sex and aggressive hetero sex was “embedded in class privilege” and “made people who wanted to have different kinds of sex feel really, really guilty.” Obviously, Moraga said, the women endorsing that dichotomy hadn’t spent much time in lesbian bars with women who were there because they “wanted to fuck.”

Excerpted from Bad Sex: Truth, Pleasure, and an Unfinished Revolution. Used with the permission of the publisher, Plume, a division of Penguin Random House. Copyright © 2022 by Nona Willis Aronowitz.

Nona Willis Aronowitz is the sex and love columnist for Teen Vogue. Her work has been published in the New York Times, The Cut, Elle, VICE, The Washington Post, and Playboy, among many others. She is the co-author of Girldrive: Criss-crossing America, Redefining Feminism (Seal Press, 2009). She is also the editor of an award-winning anthology of Ellen Willis’s rock criticism, called Out of the Vinyl Deeps (Univ. of Minnesota Press, 2011), as well as a comprehensive collection of her mother’s work, The Essential Ellen Willis (Univ. of Minnesota Press, 2014), which won the National Book Critics Circle Award for Criticism.

When Silence is Heard: Telling the Stories of Women During the Partition of India 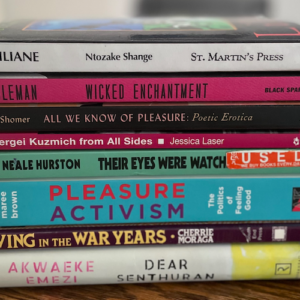 Kendra Allen is the kind of writer who can keep plates up and spinning. She’s a poet, essayist, and now, with her book...
© LitHub
Back to top
Loading Comments...